You are here: Home / literature / Michael Downing, writing for his life

What do you do when the discovery of a genetic heart condition threatens not only your life (its first symptom: sudden death) and your health (thanks to a string of medical disasters) but also the very authority to tell your own life story?

If you’re Michael Downing, whose memoir Life with Sudden Death has just been published, you address all threats with the same strategy: you write.

Michael and his life story have a complicated history. The youngest of nine kids in Pittsfield, Massachusetts, Michael had always felt a bit outside his family story, in part because his father – “the central figure in my family’s life” – died when he was three (most likely of the same genetic condition of which Michael would later be diagnosed). Plus, Michael became aware at a young age that he was gay, an identity that didn’t exactly square with his pious Catholic upbringing.

But by age 45, he’d created his own story: he’d become a respected writer, teaching at a prominent Boston-area college (Tufts), writing acclaimed books that have spawned a movie adaptation and frequent national media appearances (his book Spring Forward has made him the go-to expert on Daylight Savings Time).

When his older brother died, as suddenly as had his father many years earlier, Michael, on his sister’s advice, underwent genetic testing. He discovered a twist in his life story: like his father, he had a genetic heart condition that could, without warning, cause his sudden death.

A new life story emerged from his “adoptive family” of geneticists, cardiologists, and internists, upending his view of where his life was heading. And, like the family story of his past, the future outlined by Michael’s physicians, and by his own DNA, rang false.

“I found myself between two authoritative versions of my life, neither of which I was really willing to accept. And yet I didn’t have a third story.” What he needed was a throughline, a story to “remake a connection to the past and present that I felt I could live with.”

The “live with” was literal. As much as it’s about identity, Life with Sudden Death is a story about the unexpected dangers of surgical procedures, medical devices, and healthcare red tape. Interestingly, writing was a key component in navigating those issues, as well.

Without giving too much away, let’s just say that doctors’ attempts to surgically intervene on Michael’s behalf didn’t go well. Or at least, not without complications. What began as a grim diagnosis became an ordeal of medical misadventures. 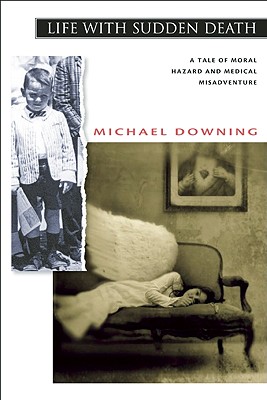 Luck (and, sometimes, the healthcare industry) didn’t appear to be on his side, but Michael did have one thing working in his favor: his writer’s mind. “I got interested in the story that was unfolding, about me.” This afforded him some objective distance “the writer’s distance,” Michael says. The writer’s choices affected the patient’s; for instance, he decided early on he would never refer to physicians with possessive pronouns. “The surgeon had hundreds of other patients and some days was seeing dozens of them at the same time he was seeing me. I was not his patient. I was another one.”

“I started to understand that I could only get this story right, both as a writer and as a person who wanted to survive it, if I saw that it was my story, and that I had a central role to play. I had to claim it.”

To make his care his own, he became “a copious and fanatic and totally annoying-to-doctors note-taker.” What’s more, his loved ones became note-takers, too (“I had a fleet of reporters!”). This attention to writer’s details helped clarify his decisions about medical care, but it worked the other way, too.

Early in the writing of Life with Sudden Death, Michael had trouble bridging the book’s two sections, which follow his childhood up until adolescence then jump ahead to age 45, the beginning of his medical quest. “I had worked out – like a lot of writers, I think – fantastically complicated architectures for the book.”

But the more he reflected on his experiences with the medical industry, the more they mirrored his perspectives as a young boy both drawn to and at odds with religious and familial doctrines.

He hit upon the idea of dividing each section by the same eight chapter titles, corresponding to the eight grades of grammar school. “These are the exact eight experiences I had as an adult, in front of doctors.”

“(The doctors) were smarter and knew more about my body than I did,” he says. “That’s the simple truth. They give you a set of ritual practices that is so-called healthcare. And you begin to cling to them because the stakes, which in my childhood were heaven and hell, had become very real. People were telling me that without the intervention of these professionals, I’d be dead at any minute.”

In many ways, the book navigates those places where doctrine – whether religious or medical no longer overlapped with Michael’s well-being, and where he had to negotiate his own path.

It is, after all, his story.

Listen to Michael reading an excerpt from Life with Sudden Death.

Michael Downing (Fiction/Creative Nonfiction Finalist ’08) grew up in the Berkshires, graduated from Harvard College in 1980, and spent a year on a fellowship in England. After that, he worked as a contributing editor for the Italian art monthly FMR, the science journal Oceanus, and Harvard Magazine. He has written numerous works of fiction and non-fiction including, Shoes Outside the Door, Spring Forward, and Breakfast with Scot.