You are here: Home / artist voices / Megan and Murray McMillan: This Land is a Ship at Sea

The Isles Arts Initiative (IAI) is a series of series of exhibitions, site-responsive installations, events, and performances on and around the Boston Harbor Islands, in Summer 2015.

The Boston Harbor Islands are a National Park that reflect natural splendor and historical importance – as well as the pressing implications of climate change. In their work for the IAI, artists Megan and Murray McMillan make use of the region’s complex identity, exploring its rich local history as well as the contemporary urgency of rising seas.

Megan and Murray are creating a site-responsive installation on Georges Island for Cove (opening 7/11), will project their work This Land is a Ship at Sea on the exterior wall of WGBH Boston studio over Mass Pike (7/16, all day), and will exhibit in 34 at Boston Sculptors Gallery (opening 7/26).

We asked the artists, a married couple who have been collaborating since 2002, about their unique path as artists working at the cross-section of many disciplines. 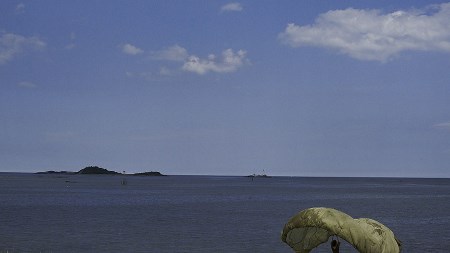 ArtSake You’ve created a remarkably wide range of work, and I’m curious about your process. Is there a consistent trajectory that a new work of yours tends to follow?
Megan and Murray: We usually begin with a specific location or material resource that forms the backbone of the project. Sometimes, this comes through a commission or curatorial invitation to work with an unusual location for filming, like with This Land is a Ship at Sea, the project we shot in Fort Warren on Georges Island, or In What Distant Sky, which we filmed in the coal bin of the former boiler plant building at MASS MoCA. Other times, the work might begin when we acquire a unique material resource, like 150 cardboard tubes (The Listening Array) or two truck-loads of industrial plastic conduit (What We Loved and Forgot). In either case, we look for the architecture or the set elements to represent metaphorical properties that intersect with whatever narrative we’re designing.

We think of our short videos as sort of visual tone poems – employing elements of space and choreography and performance to evoke ideas that are difficult to articulate in words: what does it mean when two people inflate a military parachute in a field of construction laser levels in a former military prison on an island that’s sinking into the harbor? Can the parachute become the island? Can the laser lines become the markers for the rising sea levels?

ArtSake: How would you describe your work to someone who is unfamiliar with it?
Megan and Murray: We make sculptural sets for short videos which performers activate in an object-centered choreography. These videos are then shown in related installations that often use elements of the original set.

ArtSake: A recent project in Toronto (The Shifting Space Around Us – image, above) struck me as a departure for you in its focus on live performance. What (if anything) surprised you about the experience?
Megan and Murray: We started working together in 2002 and for the first four years of our collaboration, we exclusively made performance installations for live audiences, so the project in Toronto was actually a throw-back to an older way of working for us. We switched to filmed performances in 2006 in part because the spaces we wanted to work in were challenging for bringing in audiences (The Stepping Up and Going Under Method in 2006 was filmed in and around the conveyer belt in an abandoned former paint factory). The project for Nuit Blanche in Toronto was an opportunity to work with a massive audience (1.5 million people) while using an incredibly unique architectural space: a fully functional roundhouse turntable. We decided to try to incorporate both modes of working by doing a live film shoot during the dusk-to-dawn festival. What surprised us was how challenging it was to simultaneously address the needs of a live audience with the needs of a film shoot.

ArtSake: Scale plays a fascinating role in your work. The sets and sculptures you build are often large-scale and expansive, yet there’s something intimate and personal both in the content and in the way viewers tend to experience the work in a gallery setting. Is scale something you intentionally explore?
Megan and Murray: Yes, definitely, scale is a major consideration in our work. We are always looking for the affective quality of the spaces: for what a site or the set elements within that site can evoke emotionally that speaks to the human condition. For the project we filmed in the Boiler Plant, one property of that location is that it’s been partially remediated, so the roof has been removed and the building is open to the elements – which meant we could bring in a camera track and have it move up through the levels of the building. That vertical camera movement reminded us of the composition of traditional Japanese hanging scrolls, which opened up a whole range of possibilities for the development of the video narrative.

The scale of the architecture became a vehicle for the intimate human narrative that happens as the camera moves through the building. We are always trying to find that blend of expansiveness and intimacy.

ArtSake: Can you describe the work you are creating for the Isles Arts Initiative?
Megan and Murray: We were fascinated by Fort Warren, a Civil War-era fort which housed Confederate prisoners of war. In particular, we were drawn to the “Dark Arches” section of the fort, which feels like catacombs and right out the windows of this subterranean series of rooms is the open water and the haunting clang of a buoy. The history of the space seemed to resonate with poetic potential. As fascinating as its military history was, we were also drawn to the fact that the Boston Harbor Islands are “sinking” as the sea levels are rising due to global warming. In fact, Georges Island is known as a “sentinel site” where six geodetic markers serve as benchmarks for charting the rising seas. For our video, we brought in 99 construction laser levels the Dark Arches and had performers lofting a military parachute through a field of laser lines, in effect, using the parachute as a stand-in for the island as it sinks through the laser level marks. 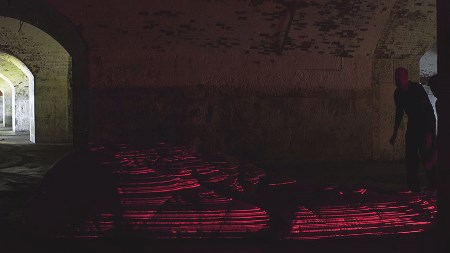 ArtSake: What is the most surprising response to your art you’ve ever had?
Megan and Murray: My (Megan’s) mother worked as a social worker at an inner city elementary school with a population of at-risk kids. Once, she was working with a young girl and happened to show her our video What We Loved and Forgot. Without knowing anything about it, the girl said “that’s like what happened when my mom died: she disappeared into a white light and now she’s always watching over me.” We’ll often get reactions like that, people who personally relate to the content of the work even through it’s not explicitly stated.

ArtSake: After the Isles Arts Initiative, what’s next?
Megan and Murray: Next May, In What Distant Sky, the work we filmed at Mass MoCA in the Boiler Plant, will open as a large-scale video installation in Explode Everyday: An Inquiry Into the Phenomena of Wonder, curated by Denise Markonish. 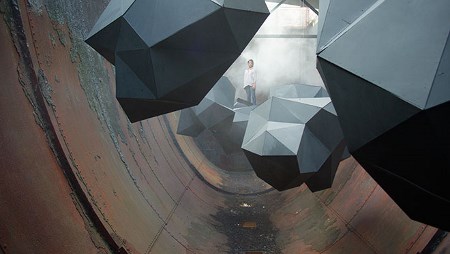 The Isles Arts Initiative is a Summer 2015 public art series on the Boston Harbor Islands and in Boston that will capture the intrinsic beauty of the 34 harbor islands. An exhibition at Fort Point Arts Community’s Atlantic Wharf Gallery and installation at Boston Harbor Islands Welcome Center are on view now. The site-responsive installations of COVE and the performance series SEEN/UNSEEN both begin July 11, 2015. Exhibits at the WGBH Digital Mural, Boston Sculptors Gallery, Boston Children’s Museum open later this summer.

Megan and Murray McMillan are Providence-based multidisciplinary artists whose work has been exhibited in Italy, Denmark, Greece, Bolivia, as well as locally at the RISD Museum, AXIOM Center for New and Experimental Media, the deCordova Sculpture Park and Museum, and MASS MoCA (forthcoming). www.meganandmurraymcmillan.com