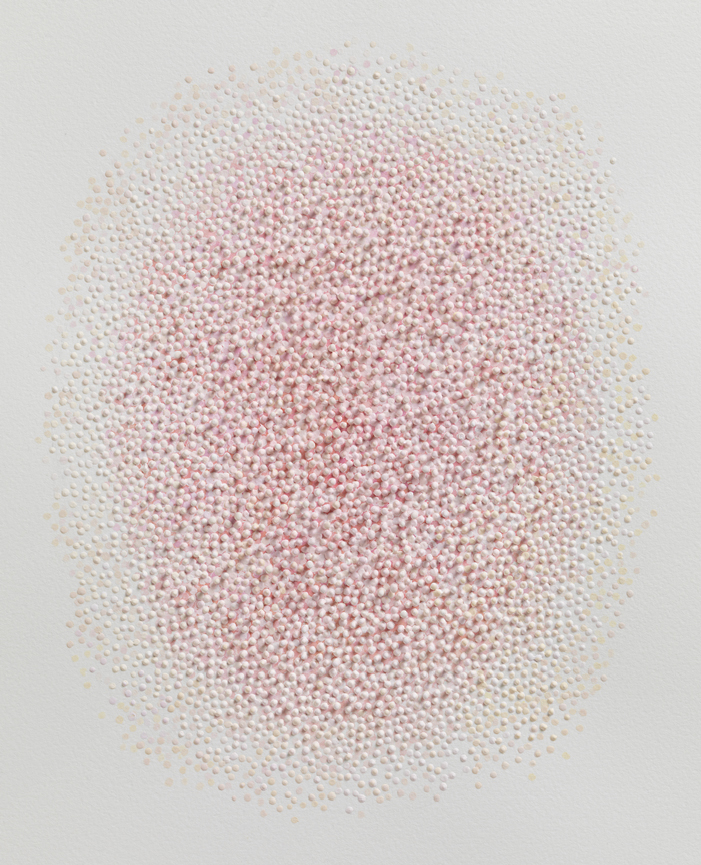 The Danforth Museum of Art will be exhibiting Outspoken, an exhibition of gouache paintings by 2010 Massachusetts Cultural Council Painting Fellow Masako Kamiya. On view in the Museum’s main galleries from March 17-May 16, 2010, the exhibit will feature a survey of work from 2002 until the present time.

The works of Masako Kamiya have a lot to say for themselves. Columns of paint rise up, bristling with energy. Dots of color vibrate, forcing the eye to dive beneath the rough, uneven surface to consider painting in an entirely different way. “Pointillism is the first thing people think of when they see my work,” Kamiya admits, but she challenges viewers to go beyond scientific ideas about color theory or optical mixing of paint. “A point is very different from a dot,” she observes. “And my paintings start with dots.” 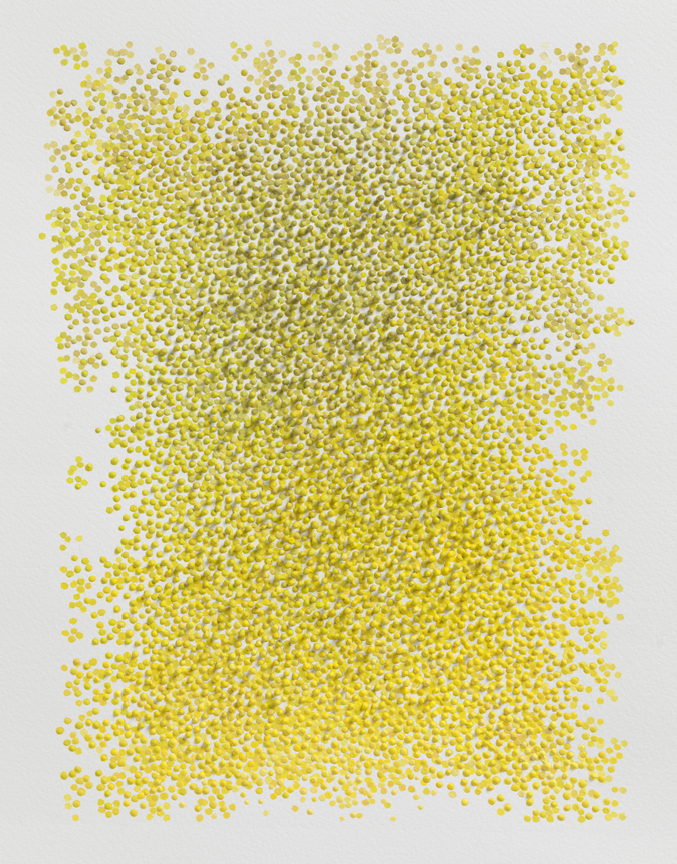 As a student, Kamiya tried “everything.” She enjoyed a long apprenticeship that explored the flexibility of oil to create landscapes, and loved the expressive works of Constable and Turner. However, she eventually realized that for her the most memorable element in those paintings was the sun or moon. Inexplicably attracted to the quality of that round shape, she found that her dot paintings evolved from there.

“Mark making is important,” says Kamiya. “Dots not only make individual marks, but also make a shape that is clear and simple.” Kamiya brought minimal dot shapes together to become a larger thing, and as her paintings evolved, her brushes got smaller and smaller. She came to rely upon the fast drying quality of gouache as a material that would support the accumulation of color. Gradually, she began using paint to construct miniature towers—variegated points of light that serve to record a painter’s experience of setting down the mark.

“Painting is like breathing,” she says. “It’s pretty much what I do everyday.” A self possessed and clear sighted vision allows her to admire—and remain dispassionately separate from—the scientific impulse that inspired Seurat; the ironic use of comic book imagery that defines Lichtenstein; or the pixilated break down of image in the work of Chuck Close. She can consider the dot paintings of the Australian Aborigines, or the neurotically obsessive dot works of fellow country woman Yayoi Kusama, and still know that she is coming from a different place. “My inspiration comes from the paint itself,” Kamiya observes. “It comes from the process of making the work, the kind of conversation I will have as each particular painting evolves.”

Since 2001, she has worked to build up surface through an accumulation of dots. Most recently she has left areas of space unpainted to reveal the natural grain of the wood panel in contrast to her painted dots. Her 2010 painting Trace, reveals her determination to sometimes “not paint.” The conversation that has always been so important “is now happening between the area painted and the area not painted. I now find that each mark is more intensely considered.” 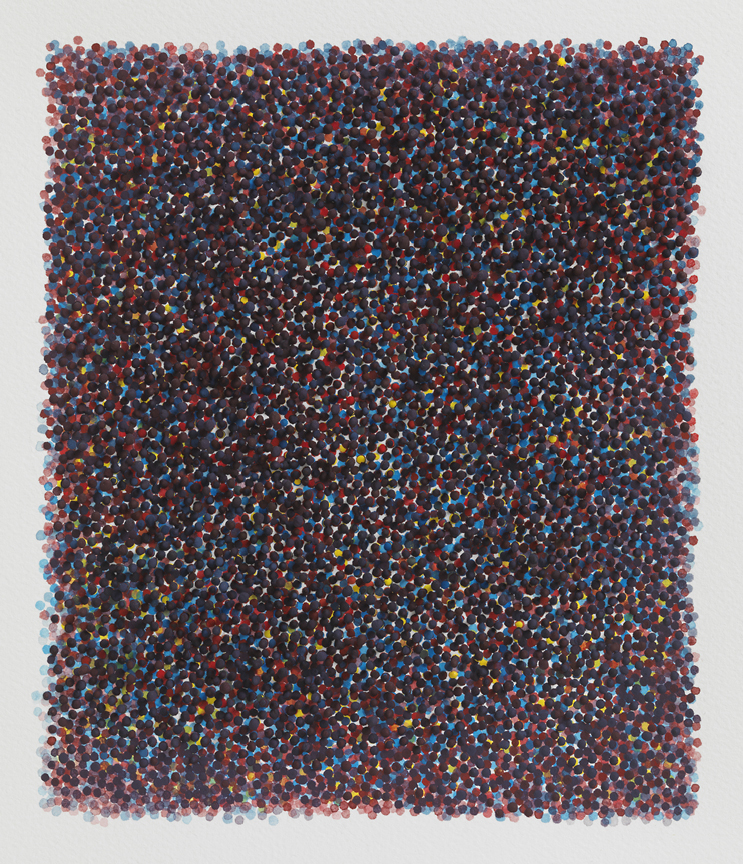 In her examination of artist statements culled from four sequential volumes of New American Painting, linguist Karen Sullivan examined how artists use language as a metaphor to discuss their relationship to their work. Specifically citing Kamiya’s statement, and her use of the word “dialogue,” Sullivan observes that abstract artists tend to speak with their materials, while representational artists are more likely to speak to the viewers. Both kinds of artists use words such as language, vocabulary or conversation in writing about their work, but they use these words differently. Like other abstract artists, Masako Kamiya speaks about conversing with her material.

It’s the sincerity of this discourse that makes Kamiya unique. Spare and eloquent, her paintings are inviting—asking viewers to go beneath their rough surface to experience mark making activity for themselves. They contain none of the cold formalism found in some abstraction. Instead, Kamiya’s works are full of feeling. “I can be very emotional,” she admits. “But even within this suppressed language, I can be expressive.”

Japanese born Masako Kamiya grew up in Chiba, a suburb just south of Tokyo. As a child she loved art and enjoyed the intensity and number of art classes provided by her school. From an early age, she wanted to become a painter. After studying briefly in Canada, she came to the United States and received her BFA from the Montserrat College of Art in 1997, followed by an MFA from the Massachusetts College of Art in 1999. Soon after graduation, her work met with critical success, and has been reviewed in the Boston Globe, Art in America, and featured in two editions of New American Paintings. In 2004 she received a grant from the St. Botolph Foundation and in 2006 was recognized by the International Association of Art Critics for presenting the Best Gallery Show of an Emerging Artist in New England. She has twice received Massachusetts Cultural Council Painting Fellow Awards in 2006 and 2010, and currently lives and works in Boston. Teaching painting at the Montserrat College of Art, her alma mater, it is her goal “not to simply tell students what may make their art work better, but to demonstrate how to think and work as an artist.”

A concurrent exhibit, Masako Kamiya: New Paintings, will be at Gallery NAGA, 67 Newbury Street, Boston, MA from April 3-May 1, 2010. THe opening reception is Friday, April 2 from 6-8 pm, and a gallery talk by Masako on Saturday, April 10 at 2 pm.