MCC Folk Arts & Heritage Program Manager Maggie Holtzberg recently paid a visit to Ruben Arroco, an artist working in a fascinating tradition: carving works of art from fruit and vegetables. In the following post, re-published from her blog Keepers of Tradition, Maggie shares the experience, in preparation for the Lowell Folk Festival this weekend, July 26-28, 2013.

Earlier this spring I was searching for someone who specializes in the tradition of carving fruits and vegetables to demonstrate at the folk craft area of the Lowell Folk Festival. This year the theme is carving traditions. After following up on a few leads, all within the Asian community, I eventually gave up on trying to find someone to demonstrate this culinary skill.

Then, just six weeks shy of the festival, I received an email from Craig Gates of the Lowell Festival Foundation. He’d been contacted by Ruben Arroco inquiring whether he could demonstrate fruit carving at the festival this summer. Serendipity? As it turns out, Ruben recently demonstrated fruit carving at the Rock ‘N Ribfest in Merrimac, New Hampshire. When someone came up to him to ask if he would be at the Lowell Folk Festival this July, he thought to himself, “Why not?” Hence, his inquiry. Craig passed him on to me, with the thought that it was probably too late and that I could “let him down gently.” Instead, I was thrilled to learn of this local chef who had trained in the Philippines, has been an executive chef for 30 years, and now specializes in customized fruit and vegetable carvings.

So last week, Phil Lupsiewicz and I drove over to the Highlands neighborhood of Lowell to interview Ruben Arroco. Ruben, his wife, and daughter live in a newly built enclave of condominiums tucked into some lush foliage just off a busy street. Ruben welcomed us in, offering us freshly brewed coffee and slices of tiramisu cake. Presentation was done with the utmost care; the cake was served on white porcelain plates decorated with mango carved to look like roses. Amazed at the trouble he had gone to and delighted in sitting down to this unexpected afternoon treat, Phil and I readied our recording equipment. 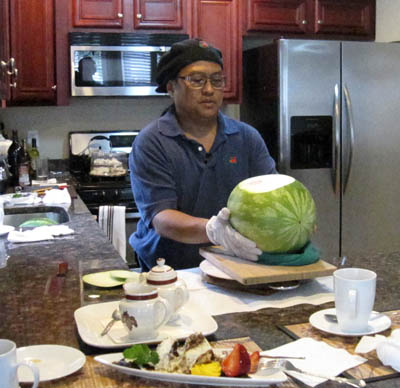 Ruben placed a round watermelon on a rotating board, securing its base with a rolled dishtowel. Then he picked up a very sharp tool and began to work. “I just start by looking for a nice surface and just make a little peel. I peel that until I see a little red color. Like so. . . I’m going to make the center petals of the flower. Most of the time they use a knife to make a circle – but I just use a cookie cutter to make a round shape. This is how it’s started. See, I love that color right there, it’s coming out, the red color. Then you start making the petals. . . ” 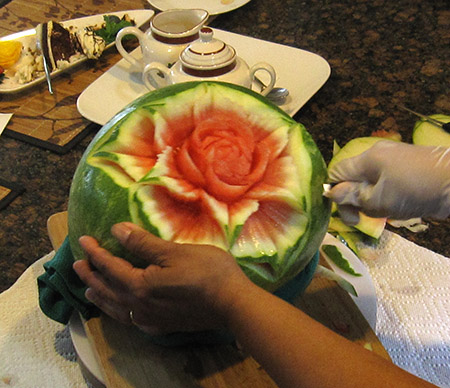 Ruben makes most of his own carving tools out of specialized stainless steel. I ask if fruit carving is a relatively rare skill to have. “It is. This is actually a 700-hundred year old art that originated in Thailand.” 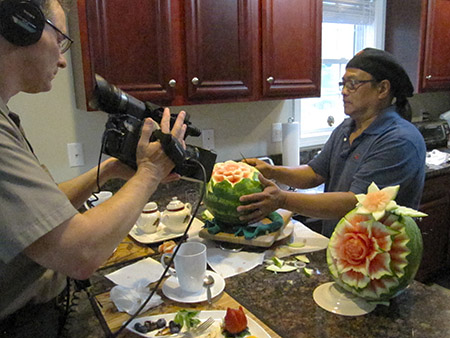 Ruben learned to carve fruit during his training as a hotel chef in the Philippines. “There is a place in the Philippines – Paete, Laguna – where people there make a living out of carving wood. Some of those guys, I was lucky enough to work with in the hotel. . . If you see a chef doing this, most of the time, if you ask, ‘Are you from [Laguna]’ the answer is yes. If you can carve wood, you can carve this – so I kind of learned it from them.”

Ruben picks up a specialized tool he made which creates V-cuts in one movement. “Even just making simple V-cuts transforms it and gives it that nicer look. You go around making these V-cuts, like that. Separation of the petals from the part that you carved, that’s very important. The part that is removed, they call that the negative side in the carving world. If you don’t remove that, you won’t see what you just carved.” 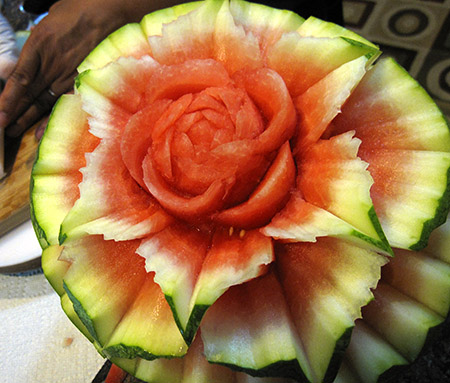 I wonder aloud if there is something hard about making art which is so ephemeral. It can take from seven to ten hours to create, yet it’s there to be consumed. Ruben says, “Even though it takes a long time to make, the best part of it is when we bring it to the party and everybody likes it. Even though it took me seven hours to make, it always feels like it only took me a half hour when everybody likes it.” 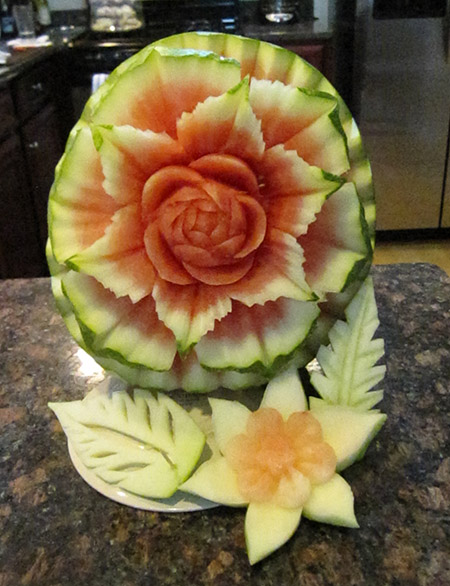 “Most of the time, we bring it to the party and then they call me back say, ‘We have a problem.’ ‘What? Why, what happened.?’ ‘Nobody wants to touch it!’ So I tell them to find a kid and tell him or her it’s for them. They won’t care; they’ll just start eating it.”

Come to the Lowell Folk Festival this July 27 and 28 to watch Ruben and 15 other traditional artists demonstrate their remarkable carving skills.

Learn more about Ruben and see more images in a profile on WBUR’s Artery.