You are here: Home / literature / Liz Waldner: Sense and Faithfulness

Recently, ArtSake’s editors learned about a medical fund for Liz Waldner, a 1998 Massachusetts Artist Fellow in Poetry. We got in touch with the acclaimed poet and discovered that despite health struggles she simultaneously published two new books this Spring and is now at work on a multi-media project. We asked her how each of her new books came to fruition, her memories of her 1998 fellowship, and what’s next in her work as a literary artist. 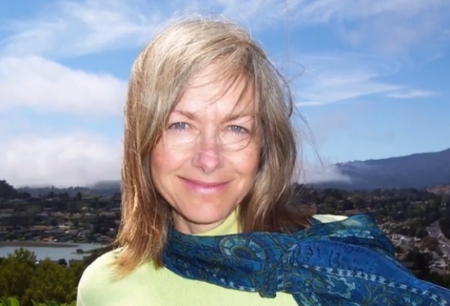 My two new books both came out Spring 2016: Her Faithfulness (Miami University Press) and Little House, Big House (Now How I Am An American) (Noemi Press). Although one could go through all of Aristotle’s kinds of causes indicating how this came about, let’s point to the fact that Her Faithfulness was slated to be the “New” section of a New and Selected Poems and Some Prose that the publisher delayed a year and then another and another, slashing it from 350 or so pages to 125 along the way. So I said never mind and brought the book to Miami University Press.

The poem from which the title is taken, “The Sovereignty and the Goodness of God, Together with the Faithfulness of His Promises Displayed,” was in The New Yorker, first with the wrong title (“A Sensible Life”); interesting in that the book comes out of my life’s apparently having left sense (as I knew it, anyway) behind. (I’d fallen ill and got iller and no one had a clue – lymphoma? lupus? Which specialist to believe?) I’d come across the title 15 years earlier in a card catalog and written it down. Came across that scrap one day and wrote its poem.

Little House, Big House comes of becoming more and more aware of the individual/soul and the “greater than whiches” of which we are a part. In particular, living in Canada awhile was a magnifying lens. My PhD work had been on the effects of US “information flows” and culture on shaping women’s identity and sense of self globally, but I hadn’t lived out of the county since the mid-70’s. And also of what it means to have a home, on one’s heart and in the world. I’d been studying Kashmiri Shaivism and other Indian sacred texts; the book’s epigraph is a favorite bit from one. Another comes from Narada’s Bhakti Sutras… so they shaped it, too.

It also came about this way: too sick to work and with a tiny disability check, having worked forever at the bottom of the pay scale (adjunct, lecturer, volunteer on a stipend for various nonprofits, house cleaner, gardener, etc.), the be all and end all – and it did begin to look like ending – of my life became finding housing. On six year long wait lists in CA, I thought I’d cleverly solved the problem by becoming a professional house-sitter. I camped, I took sublets, I did housesits, I slept in my car.

Until I got too sick to manage that. Which takes me to my next project, or at least its subjects. A book – prose, poems, photos – and a website/map, detailing my adventures and meetings over the last years of becoming a permanent stranger/full-time mover and maker of short-term homes from which I ventured into the very strange land of medicine/medicos.

The health care system is total wreck in this country and the quality of care available to most is abysmal. I was nearly done in multiple times early on because I trusted that “they” knew what they were about. When in 2008, I got violently ill on my way cross-country, this was attributed to a tick bite. In the ER where no one washed their hands ever, I got a C. difficile infection – both of these diagnosed without the proper tests (I now know). No one knew how to treat them properly; even today, people are given Flagyl which just makes it all chronic. I lost 20 pounds in 2 weeks… That was really the end of my what I’d thought of as my life and the beginning of another.

There’s a whole world of older women in that predicament, living in campgrounds, moving every 14 days, usually – most require you to be gone for 24 hours then; some it’s 2 weeks. Women are still paid 80 cents on the dollar compared to men (my last job, the young male hire with 4 years experience and 2 books was paid 20k more than I with my 15 years and 8 books and their prizes), don’t have the same career opportunities and have higher medical costs, in general (and fare more poorly in our messed-up health “care” system), so Social Security checks (and for the lucky, pensions) are often inadequate.

I would like to say hooray for Mass., its new law forbidding the ruin the rest of your life job interview question: what were you paid at your last job? In fact, I would live in Massachusetts if an affordable abode presented itself. I loved it. (The story of how I got my rent-controlled apartment is a doozy: a cloistered nun with whom I volunteered at a battered women’s shelter in Albuquerque prayed for me to get a job [cause 1]; my friend in Boston decided to spend the day with her girlfriend rather than help me apartment hunt when I arrived [cause 2]; my adult student [teaching teachers at Bard] who became a friend indeed and stepped in happened to teach the niece of the woman in the mink coat who showed us the studio [causes 3 and 4]; I already had the lecturer job at Tufts – once I got the job, as a joke I asked the nun, who’d been taking care of her dying father and was heading back into cloisters, if she could also find me a place to live in Boston on $12k a year – etc. As the other nuns said when I took them to their first trip to a food co-op, that one has a direct line to God.)

Which brings me to where was I when I got word of my Cultural Council grant. (Hooray for Mass., some more. My 7 years in artist-grantless CA didn’t help my situation any.) Rent control was ending in Cambridge; Tufts said they couldn’t pay me any more; I hadn’t published a book yet. So I decided to put together a year of artist residencies to tread water and see what might be revealed. I don’t remember exactly where I was on the map but I was happy in my heart and mind and at that point over-worked like a donkey body to get it because it meant (cue music) “Food around the corner, there’s food around the corner, food around the corner for me…” (what a dreadful tune to have in one’s head – sorry). And a roof over my head, to boot. But that was the end of my nice Mass. life and the beginning of the seriously peripatetic.

Liz Waldner grew up in rural Mississippi and earned a BA in mathematics and philosophy at St. John’s College and an MFA at the Iowa Writer’s Workshop. Her first book of poetry, HOMING DEVICES (O Books, 1998), came after an 18-year silence; since then, Waldner has published prolifically. Her recent books include A POINT IS THAT WHICH HAS NO PART (2000), which won both the Iowa Poetry Prize and the James Laughlin Award, SELF AND SIMULACRA (2001), DARK WOULD (THE MISSING PERSON) (2002), TRUST (Cleveland State University Poetry Center, 2009), PLAY (Lightful Press, 2009), HER FAITHFULNESS (Miami University Press, 2016), and LITTLE HOUSE, BIG HOUSE (Noemi Press, 2016). Learn more about the medical fund to support Liz Waldner.