Interim Writers is a collective dedicated to fostering Boston playwrights. Its “Have You Read” series presents monthly readings of new plays, and the next playwright to be featured is Lia Romeo, a playwright, novelist, and humor writer whose new play REALITY explores the (sur)reality of a TV dating show, “Looking for Love.”

You just published a new novel, Dating the Devil. How early in your creative process do you know whether an idea better fits the prose or playwriting format?
I usually know right away … for one thing, the scope is totally different, because realistically, in order for a new play to get produced it really helps for it to be limited to six or fewer characters (or at least six or fewer actors). So if it’s a story that’s going to take a lot of people to tell, it’s generally going to be better-suited for fiction. But I also approach the two really differently … I turn to theater when I feel like I have something serious to say (though I usually try to say it in a comic way), whereas I tend to use fiction to indulge my love of genre (like chick lit, which is what my first novel is) and approach it more lightheartedly. 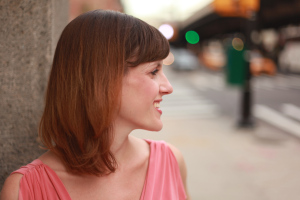 Where did Reality come from?
Well, to be completely honest, I’m obsessed with The Bachelor. I know how completely ridiculous it is, and yet every season I tune in and watch every episode. It fascinates me how at this point, all of the men and women on the show are basically playing versions of men and women who were on past seasons – there’s something very meta about it. So I was interested in exploring that, and in why the show exerts a hold over me, and millions of other people, even though we simultaneously realize it’s totally absurd. I’m also getting married this year, to a wonderful man who I’ve been friends with for ten years – and dated for three – and so the idea of getting married to someone you’ve dated for six weeks, on television, while they were simultaneously dating twenty-five other people, is totally inconceivable to me … and when something seems totally inconceivable to me, I generally want to write about it so I can figure out what makes it conceivable for other people.

Computer, longhand, or typewriter?
Computer! My handwriting is terrible, so I started typing when I was about eight, and now I type over 100 words per minute. I think it’s really interesting to speculate about the ways the medium changes the message, and whether my writing would be different if I did it all by hand (probably) … but I’m very glad I don’t actually have to find out!

How many revisions does your work typically go through?
I revise a LOT. One of the best pieces of advice I ever got from a writing teacher was to write badly … meaning don’t be afraid to just get something out on the page, and then rewrite and rewrite and rewrite until it’s actually something decent. I don’t ever suffer from “writer’s block,” because in early drafts I usually just follow my subconscious and end up with eighty pages or so of total garbage … and then start thinking about what the play is actually about and what should stay and what should go. I’d say I usually write three or four drafts before I even show a new play to anybody, and then revise some more through readings and development.

Lia Romeo’s new play REALITY will be read as part of the Interim Writers “Have You Read?” series, Sunday, April 7th at 7:00 PM at the Democracy Center in Harvard Square.

Lia Romeo is a playwright, novelist, and humor book author. She earned her B.A. from Princeton University and her M.F.A in playwriting from Rutgers. Her plays have been produced by Unicorn Theatre (Kansas City, MO), Project Y Theatre Company (New York, NY), HotCity Theatre (St. Louis, MO), Stillwater Theatre (Raleigh, NC), and Renegade Theatre Experiment (San Jose, CA), and have also been read or developed at the Kennedy Center, Orlando Shakespeare Theatre, Playwrights Theatre of New Jersey, New Jersey Repertory Theatre, Kitchen Dog Theatre, Performance Network Theatre, Abingdon Theatre, and elsewhere. Her one-act and short plays have been produced in fourteen different states and internationally. She has been a finalist for the O’Neill, PlayPenn, WordBridge, the Bloomington Playwrights Project, and the Heideman Award. She was the 2008-2009 National New Play Network Emerging Playwright-in-Residence at Playwrights Theatre of New Jersey, and is currently a member of the New Jersey Emerging Women Playwrights Project and the Interim Writers Accomplice. Her humor book, 11,002 Things to Be Miserable About, was published in 2009 by Abrams Image, and has sold over 30,000 copies. Her first novel, Dating the Devil, was just published by BelleBooks, and is in development as a TV movie with Vast Entertainment.