You are here: Home / artist voices / Laura Harrington on Writing for the Page/Stage 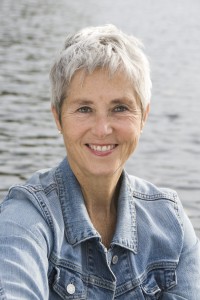 Laura Harrington (Dramatic Writing Fellow ’05, ’97) is a two-time recipient of both the Mass Cultural Council fellowship and the Clauder Competition for best new play in New England. In 2008, she won the prestigious Kleban Award for the “most promising librettist” in American musical theatre. Her upcoming projects include a song cycle with composer Elena Ruehr and a series of choral works with composer Roger Ames.

But that’s not the whole story.

With the impending publication of Alice Bliss (Pamela Dorman Books, Penguin/Viking, 2011), she’s also a debut novelist, with another novel currently in the works.

We asked Laura about Alice Bliss and about her whole, fascinating writing story.

ArtSake: Congratulations on the impending publication (June 2) of Alice Bliss! I know you primarily as a dramatic writer – and in fact, on your website, you say that the core idea of Alice Bliss comes from a musical you wrote, Alice Unwrapped. How did you decide on long-form prose as the way to continue telling Alice’s story?

Laura: A few things conspired to open up this world to me. For one, I couldn’t get this character out of my head. And then I was given this incredible award for my music theatre work that gave me two years of writing time. Which was an awe-inspiring moment – so much validation for my theatre career coupled with so much possibility. But I didn’t immediately think: Great! I can’t wait to write my next musical. Instead I thought: This is my chance to be a beginner again, to re-connect to the creative process by trying to do something I’ve never done before. I also wanted to pick up my pen without thinking about anything other than story. No worries about size of cast, cost of production, etc.

ArtSake: As someone who writes in many different forms (stage plays, musical theatre, libretto for opera, prose fiction), I’m curious if there’s an acclimation period when you’re starting a new project – where you have to recalibrate to the demands of the form?

Laura: I think of it as a time of expanding the imagination more than one of recalibrating. Each form has its limitations as well as things about it which are expansive. And I love pushing the boundaries.

ArtSake: Do you find the writing process to be basically the same, no matter the form?

Laura: The actual writing process, the day-to-day activity of writing is the same no matter what the form. You have to show up and give yourself to it. I found I had to make my life very, very quiet in order to create the mental space for a book.

ArtSake: Can you take us through the process of finding your agent (Stephanie Cabot at the Gernert Company) and working with Pamela Dorman Books (Penguin/Viking) to publish it?

Laura: I am blessed with good friends who gave me a hand at critical points along the way. One friend introduced me to her agent, who read my book and passed it along to another agent in the firm who she thought would be a better fit – that was Stephanie Cabot. She’s super smart, strategic, and I feel lucky to now call her a friend. We went through several months of revisions – Stephanie was key to making Alice Bliss a better, richer book – and then she sold the book in a matter of weeks.

Pam Dorman and everyone at Penguin/Viking have been amazing to work with. Every step of the way: editing, book design, selling foreign rights, having a plan for the book and its future. I have been very, very lucky.

ArtSake: What has most surprised you about the process?

Laura: How friendly people are, how open this world is, how easy it is to meet and connect with other writers.

ArtSake: You’ve written about the exile of Napoleon Bonaparte, about a young couple in the aftermath of 9-11, and about events surrounding the Civil War, WWI, and now the Iraq War. What draws you to the subjects you explore in your drama and prose?

Laura: I write about what obsesses me, the things I can’t stop thinking about. I’m also drawn to the voiceless and the displaced. And I’m deeply disturbed about war and wish that I could do something to make a difference.

ArtSake: On a military spouse-themed blog, an early reviewer of your book wrote of your characters, “As one of the 1% who are being impacted by the multiple deployments, these people are mine.” How did you find your way so believably into the day-to-day reality of a family struggling with military deployment?

Laura: My own family was blown apart by war and it’s something we rarely, if ever, talk about. My father returned from WWII and suffered from what was then called battle fatigue. My mother said, “The fellow I married didn’t come home.” In 1966, both of my brothers enlisted in the Air Force, one out of high school, one out of college. One went to Viet Nam, the other worked with NORAD. My parents were both grieving during those 4 years, as was much of the nation. Those were dark times. And nothing was ever the same again. Our family, as I knew it, was gone; my brothers were both changed by their experiences, and in a chain reaction, all of our relationships were interrupted, and some damaged beyond repair.

ArtSake: As your book is being published, you’ve set up a blog, a Facebook page, and book club resources. It seems that writers today often need to assume a more active role in promotion of their books. How have you found this new challenge?

Laura: It’s been really interesting. Social media is not my natural milieu, but as print reviews are disappearing, much of what used to happen in print is now occurring online and in real time. We’re in the middle of a period of transition, which is especially open and exciting in this particular moment. I admit to occasionally being a bit skeptical, but with the advice of some very generous writers who are a few steps ahead of me, I’ve jumped in.

The contact and connections with other writers has been amazing and really fun. I’ve found people who are friendly, open, and supportive; I’ve met and corresponded with writers in South Africa, England, Sweden, Canada, and all over the US.

Laura: There’s one decision I’ve had to make several times that seems like it’s had the most impact. It’s a decision that’s often been made in very dark times. And that decision is simply to keep going, to keep writing.

Laura Harrington is an award winning playwright, lyricist and librettist. She teaches playwriting at MIT and lives in Gloucester, MA.