You are here: Home / artist voices / Kristin Andreassen: by voice, strings, or clog

A few months ago, our sibling blog Keepers of Tradition highlighted a video with singer-songwriter Kristin Andreassen. The video (which you can watch, below) features Boston schoolkids, Kristin’s irrepressible music, and a great premise. Intrigued by the video – and also by Kristin’s singular blend of songwriting, percussive dance, and ebullient wit – we asked the singer-songwriter about her music, her eclectic background, and the unique demands on the life of an inventive musical artist.

ArtSake: The video for your song “Crayola Doesn’t Make a Color for Your Eyes” features 2nd graders from the Conservatory Lab Charter School in Brighton. Can you talk a little bit about how that video came about?

Kristin: I have an awesome connection in Boston with a woman named Lindsay O’Donovan. She’s my friend & bandmate Aoife’s mom, and she’s an amazing supporter of local musicians and music programs for kids. One day I told Lindsay I wanted to make a music video for “Crayola” and I wanted to include kids but I wasn’t sure how. I especially wanted to work with kids (usually city kids) who know a lot of rhymes and hand rhythms, and who haven’t yet forgotten how to play pattycake (I always insist I didn’t make up any complicated body percussion for “Crayola.” I just remember what I used to do on the playground!).

So Lindsay introduced me to her friend Megan Howe, a teacher at the Conservatory Lab School in Brighton. The school focuses on music as a teaching tool, so it seemed like a great fit. I would pay for the video and hopefully create a fun real-life musical experience for the kids, and the school would allow me to take over the schedule of this second grade class for a day and a half and put them to work on my project.

I was really impressed with the school’s flexibility in general. First I went to meet the kids and we sang the song together. Then Megan incorporated it into her music curriculum and they sang the song every day getting ready. They also practiced their breakdancing moves from dance class the year before (seriously, they studied breakdancing in school!). So when Ballard (my music video director) and I came back to film them, they were totally on board with the song and the project in general.

ArtSake: Earlier in your career, you spent five years as a performer/company member with the Footworks Percussive Dance Ensemble in Maryland. Do you still perform as a dancer and how does it interplay with your work as a songwriter?

Kristin: After Footworks, I joined a stringband called Uncle Earl. I mostly play guitar and sing in that band but at least one time during every show I’ll still pull out a clogging number. I’ve also managed to make it back for some kind of Footworks reunion show once or twice a year, but I have to admit I’ve been feeling out of practice.

My dancing has been incredibly influential in my songwriting – in the first songs especially. Even though I knew some piano and some chords on the guitar, I didn’t really play any instruments well enough to accompany myself when I started writing. So my very first songs were a capella, accompanied by rhythm only. (“Hello Where Are You?”, “Like the Snow,” “Faith,” “Crayola” are a few like that.) I eventually found chords for those songs but it was after the fact. These days I write more often on guitar or piano, but I think the rhythmic influence is still there.

I’m also really interested in putting together a show of original songs illustrated with dance. One time I commissioned my friend Emily Crews (from Footworks) to choreograph dance to six or seven songs (modern and percussive). We tried it once but I want to do it again with a “real” stage (wings and some lights… deluxe stuff like that).

ArtSake: Correct me if I’m wrong, but I believe you’ve worked as a train porter, lived on a bus while touring as a dancer and musician, and spent two winters in the Canadian arctic working on a school-based Internet project (I detect a theme of travel and exposure to the elements). Would it be fair to say you’ve had an eclectic past? And would it furthermore be fair to say that eclectic past has insinuated its way into your music?

Kristin: Eclectic? Oh, yes, you can use that word. I’ve never really followed “the rules” in my career. That’s not out of rebelliousness… it’s more about my ignorance (or innocence?) of the rules in the first place. I didn’t start dancing professionally till I was out of college (with a degree in history) and I think I didn’t know enough about the industry to think I was too old! Plus, in folk music there are a lot less rules to begin with. It’s the kind of music you really can play all your life and you’re less likely to feel like you to have to retire when you get old and wrinkled ;-).

ArtSake: Are there any other unique experiences that no list of your work history should be without?

Kristin: Well, recently, my friends found out that in high school I was a co-host of a call-in public access tv show in Hillsboro, Oregon called Homework Hotline. Does that count? I mostly did people’s math homework for them live on TV. I don’t even know why I’m admitting that here but I think it’s hilarious.

ArtSake: Your compositions seem to have equally strong relationships with American folk traditions and contemporary music. Can you talk a little bit about the way tradition and invention come together in your art?

Kristin: After dancing, the first music I really focused on playing was American old time music. I’m grateful for that now, because no matter what the songwriting fad of the day might be, I feel like I’ll always have a folk musician’s ingrained sense of what a truly timeless song sounds like.

When I started writing, I remember being self-conscious about not wanting to put too much of myself in my songs. What I love about traditional music is that it’s direct and honest without really being “personal.” I think good pop music has that same quality. There’s poetry there if you want to look for it, but on the surface it’s friendly, and maybe even danceable. I go for that in my writing.

But I also think I used to self-censor a little too much. I would only play the songs that I felt could stand on their own (i.e., songs that could be sung by somebody other than me the songwriter). I would keep my more introspective or abstract songs to myself. In the last few years, I’ve loosened up on that.

I noticed that some of my favorite songwriters in the world tell very specific and personal stories in their songs. There’s just a certain quality in either the writing or the delivery that makes it transcend self-obsession (I’m thinking of Leonard Cohen, Dan Bern, Jeff Lewis, Joni Mitchell, Paul Simon…). So I realized it’s not impossible to write in a very personal way and make it universally appealing. It’s just a skill… and now I’m working on it!

ArtSake: I was interested to see your New Song Club promotion, where subscribers receive a new original song every month. You seem to be a natural at making use of technology to reach audiences. Did you have to force yourself into the world of YouTube clips, digital distribution, and multiple web presences, or was it a natural fit?

Kristin: Oh my goodness, my friends have had to drag me kicking and screaming onto Facebook. I just set up an account last month. Back in the day, I was pretty quick to get a web site, e-mail lists and even MySpace but I think some time about a year ago I had a total technology meltdown. I was counted up the time I spent on the computer (bookings, promotion, e-mails, social networking) and compared that to the time I spent playing music and I got really depressed.

I can’t tell you how many musicians I’ve known who, as soon as they get a little bit successful, can’t find any time to play music anymore because of all the administrative work it takes to be a “middle level” touring musician. The curse of the self-employed lifestyle is that while you seemingly have control of your schedule, you’re also never really “off duty.” It’s so easy to just keep e-mailing and posting and blogging all night.

On the other hand, the computer can be really great for creativity if you’re using it to find material, or watch other peoples’ performances. YouTube is just amazing for that. And as an old time musician, it’s so easy to find the old “obscure” tunes that in another era we would have had to make a trip to some archive in Washington, DC to hear.

The Song of the Month Club is a combination of two technologies – recording (which I love) and sending the recordings out to online club members. The second part is a chore, I have to admit. But I like getting the immediate response to my recordings – as opposed to waiting and putting out an album and hearing people’s reactions sometimes years after the song was written.

Ambivalence. There. That’s my verdict on technology in music.

ArtSake: Have you changed anything about the way you make or market your work in response to the recent economic downturn?

Kristin: I moved out of my apartment! I know this sounds dramatic but seriously, I found myself facing a year of less show bookings than at any time in my music career. My band Uncle Earl had signed on for an eight-week bus tour with three other bands, organized by an established music management group. I was counting on that income to cover some months of more creative work that won’t pay off for a while (I’ve been producing an album of children’s music).

But with the economy, a lot of venues cancelled or wouldn’t commit to hiring the tour and it was shortened from eight to three weeks. I just decided that the best way to lower my expenses was to go visit my family (in Oregon) for a few months and then sublet from friends who were on tour when I was back on the east coast. It’s actually been fine for me, because I don’t own a whole lot of “stuff” and I enjoy traveling, but it definitely was a decision directly influenced by loss of work due to the economy.

Kristin: I’m really excited about the children’s record I’m producing. It’s called Jumping Through Hoops: Songs of Bravery and Courage, and the songs have mostly been written by my friend Kari Groff-Denis, a child psychiatrist in New York City. The songs cover issues kids face like sadness, bullying, divorce, moving to a new town, making mistakes, etc. It feels good to be making music with a very specific purpose. It’ll be useful for mental health professionals, but I also think it’s good music that adults will like too. 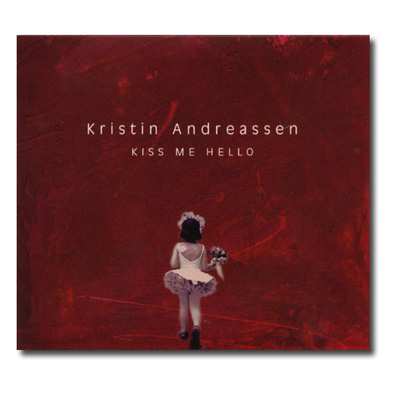 Kristin Andreassen is a singer-songwriter, musician, and dancer. Along with her solo work (her album Kiss Me Hello came out in 2006) , she is a member of the old-time string band Uncle Earl and the “folk noir” vocal trio Sometymes Why. As a dancer, she toured, performed, and taught dance with Footworks Percussive Dance Ensemble. Recently based in Boston, she is currently touring and producing a CD of music for children.