You are here: Home / traditional arts / Keepers of Tradition

Here’s a new blog to add to your feed: Keepers of Tradition.

It’s a blog about traditional arts in Massachusetts by state folklorist Maggie Holtzberg, and I vigorously and with lots of enthusiastic verbal flourishes recommend you make a habit of reading it. (And not only because Maggie sits catty-corner from me at the Massachusetts Cultural Council offices.)

It’s part celebration of traditional arts in Massachusetts and part web journal of Maggie’s truly fascinating work as state folklorist. Maggie travels throughout the state chronicling and archiving folk art traditions passed on and sustained by our individual artists and communities. (Some of you may already know about the current exhibition that work produced: Keepers of Tradition: Art and Folk Heritage in Massachusetts, at the National Heritage Museum in Lexington through February 8, 2009.) The blog shares more of that fieldwork, such as the post below, an exploration of Boston’s Caribbean Carnival which starts today!

Caribbean Kings and Queens in Dorchester 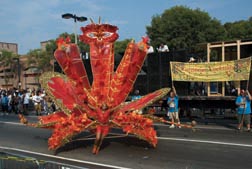 This Thursday, August 21, marks the opening of Boston’s Caribbean Carnival – a Trinidadian style extravaganza now in its 35th year. I attended this annual festival for the first time in 2003. Four years later I was offered a prime seat in the judges’ viewing station, where I shot this photo of Shirley Shillingford. She is a member of the Trinidad and Tobago Social Club, which is one of 9 area mas (masquerading) bands that compete each year.

A succession of bands march their way down a 21-block parade route, ending up at Franklin Park. The King and Queen costumes are spectacular and they are followed by sections of exuberant dancing masqueraders. Be prepared for loud calypso music, the smell of jerk chicken, and vendors selling trinkets from Trinidad, Tobago, Jamaica, Barbados, and a number of other West Indies islands. Many in the Caribbean cultural community live for carnival. More than 600,00 people attend carnival, though most Bostonians have no idea this event takes place each year. Art critic Greg Cook previewed the event in the Boston Phoenix last week. It would be nice to have additional press coverage for a change. 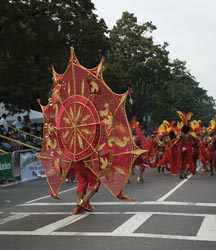