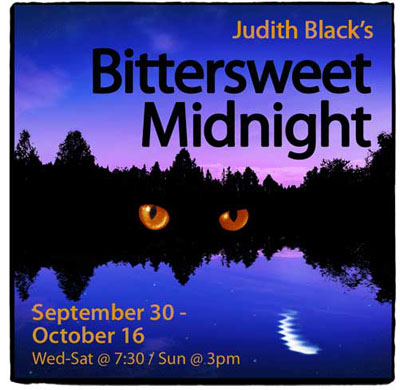 Salem Theatre Company is about to launch an intriguing season of theatre on the North Shore: five plays, all by living, working female playwrights. We asked storyteller and playwright Judith Black, whose play Bittersweet Midnight is about to premiere in Salem, and STC Artistic Director John Fogle, to delve into the details of their work as theatre artists. Here, they elaborate on storytelling and history, the arts as a tool for humankind, and contemporary voices in theatre.

ArtSake: Judith, can you tell us about Bittersweet Midnight – what are the origins of the play? And can you talk about the decision to connect the story of Wilmot Redd, a victim of the Salem witch hysteria, with contemporary tales of women?

Judith Black: I do a lot of work with teenagers in my town through a volunteer program, Bridging Lives. It’s a big brother/big sister program that Dr. Jack Welter and I started ten years ago. When you see how profoundly affected a life can be by one human being to the ill or the well, you know that little has changed in this world. In Old Towne, the piece about Mammy Redd, it is an opportunity to explore how two lives, that of a “grouty” old woman and a young orphan girl, are impacted by one another and the immediate world in which they dwell. Teenagers can have their lives destroyed by cyber bullying. One cruel word or misunderstood picture is suddenly the providence of their entire world. In 1692 all one person had to do was call out “witch,” and a woman’s world was destroyed. I hope that in exploring the ancient we will have a clearer vision of the present. Also, when one’s world is locked into a theology where you are born in sin, work a plot of land all your life, then die and go to Hell, one wonders where redemption might be. This piece attempts an answer. 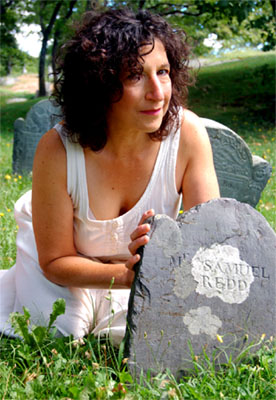 The second act is simply raucous fun and terror as I explore women’s compulsive relationships with food, sex and their mothers. This is a sacred trilogy!

ArtSake: What does it mean to premiere this work, so steeped in local history, in Salem?

Judith: It means that the authentically historic parts had better be correct! I did most of the research at the Essex Institute, but have run the story for folks at the Marblehead Historical Society and for the history diva of Marblehead, Bette Hunt. Bette was brilliantly helpful. Who knew that Brown’s island was known as Charles Island in 1689? Bette Hunt does!

ArtSake: How does your background as a storyteller inform the way you created this play?

Judith: When you are working with a piece of history the facts are given, but never the human motivations. It is those that enable humans to identify with another time and place. As a storyteller it is my job to discover and make those motivations available to listeners so they are on a journey of the heart.

The tales about women’s passions emerge right out of my life. After a 4 day retreat at Kripala for women with eating disorders that was charmingly called “What am i hungry for” the one issue that was never addressed would not go away. That was the relationship, or lack of it, between the svelts and zaftigs, or in common parlance, the fats and the skinnies or the bulimics/anorexics and compulsive over eaters. Exploring that was the root for the story Hungry. The Window Washers is the middle aged woman’s version of her husband going to the cheerleader car wash. The final story, about disappointed mothers and disappointing daughters, is simply the stuff that our lives are made of, and you will laugh till you weep.

ArtSake: John, the current Salem Theatre Company season has a heavy emphasis on contemporary plays by current working playwrights. What draws you to new and contemporary work?

John Fogle: This answer may ramble a bit… and this is perhaps a bit bookish… but I see all arts as humankind’s unique problem-solving tool. The well-made play – be it a tragedy, comedy or something in between – usually presents a troublesome situation and shows us a resolution – happy, sad or bittersweet. Because we, as the audience, have no moral responsibility for what occurs onstage, we can absorb these “lessons in life” with our defenses down. The theatre – and the arts in general – is where we tackle the dangerous stuff. So, I look for plays that promise to fill this role. Plays which relate.

And these are the type of plays I like to work on, to spend my time with.

I made a list of all the female playwrights I could think of, wanting the gather some of the strongest, best-known artists out there. Because audiences tend to respond to plays or playwrights they have some familiarity with, I zeroed in on the award-winning playwrights and on plays with a reputation for success.

(An aside: in my salad days, I worked for the Orson Welles Cinema Complex in Cambridge – first as cinema manager, then as Adv/Promotion Manager. We were in the cinema art & revival business – old movies – and we often quipped that you could get folks to see the new movie or the old play but not the old movie or the new [read unknown] play. True still, I think.)

Then I had to be concerned with finding plays which would work well in our small, rather basic theatre space. Also, I tried to consider “balance.” A mix of pure drama (Wit by Margaret Edson) and comedy (The Long Christmas Ride Home by Paula Vogel), realistic (Painting Churches by Tina Howe) and impressionistic, cutting-edge (Dead Man’s Cellphone by Sarah Ruhl) and more traditional narrative styles. Plus something from an established but local playwright/performer… which is what my long-time friend Judith Black brings to the party.

Finally, the plays had to “speak to me” (cliche!) about something that mattered.

ArtSake: I’m interested in the variety of STC’s programming, too, with a music calendar as well as cross-over events with artists from numerous disciplines – flash fiction writers, improv performers, even an “original theatrical bellydance.” What does this blend of styles and disciplines add to your identity as a theatre troupe?

John: Variety is the spice of life and we want to appeal to the broadest possible audience in our community. Our theatre space is an excellent small venue for music, stand-up, readers’ theatre, and the like – so we are eager to provide entertainments to these market segments and to introduce as many people as possible to our space. Getting “on the map” in the local consciousness is a long process. We hope that our diversity of offerings will advance that process.

Bittersweet Midnight by Judith Black, directed by John Fogle, will be performed at the Salem Theatre Company September 30-October 16, 2010.

John Fogle is a director, designer, and actor, and is Artistic Director of the Salem Theatre Company.