Theatre artist John Kuntz has an epic imagination, whether for inhabiting the turmoil of a 600-lb man as an actor or for conjuring the interwoven stories surrounding a mysterious hotel as a playwright.

But until recently, he hadn’t written plays on an epic scale. Intriguing then that the Circuit Theatre Company, the troupe producing John’s latest play The Annotated History of the American Muskrat (running through August 16), makes it their mission to produce “epic, wild, adventurous theatre.”

We asked John about the play, and about his wild and wooly adventures as a Boston-area theatre artist. 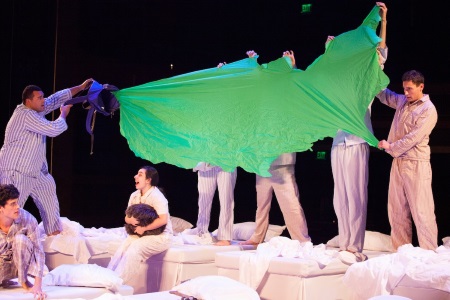 ArtSake: It’s always interesting to trace a play from its initial spark to its first production. How close is The Annotated History of the American Muskrat you’d initially conceived to the play being performed?

John: The play is a commission from The Circuit Theatre Company, so it was developed in rehearsal with the company of eight actors, the stage manager and the director, Skylar Fox. So there was very little separation between the writing of the play and the performance of it. I did have the initial idea of what I wanted the play to be about, but I really didn’t begin the writing process in earnest until I met the cast and got to know them. The first rehearsals began in mid-May, so I needed to provide a script very fast! The Circuit does epic plays, and wanted a three act play that explored American History in some way. This was a challenge, because I typically write 90 minute one-acts. But I love doing things I’ve never done before, and it was very interesting to work with such a large canvas. I wrote the first act and they began to rehearse it while I wrote the second act. Then I wrote the third act while they staged the second. I would visit rehearsals to watch how the actors responded to the text, and I would use the things they were doing in rehearsal to inspire the rest of the play.

ArtSake: One of the fascinating things about your new play is the wide array (and strange juxtapositions) of its references. The Captain & Tennille and The Ford Administration, Little Debbie Snacks and muskrats. Is there a through-line, do you think, to the topics that interest you as a playwright?

John: Actually, there really IS a connection to The Captain and Tennille and the Ford Administration. In 1976, the Captain & Tennille performed “Muskrat Love” at the White House for Queen Elizabeth II during the bicentennial celebration. So Gerald and Betty Ford, Queen Elizabeth II, Prince Philip, Henry Kissinger were all sitting in the East Room together listening to “Muskrat Love.” I stumbled across that piece of information and I said “That’s It!” More often then not, I’m working from dreams or emotions or instincts. I’ll be drawn to certain characters or scenarios and I can’t explain it, they just feel right, like Little Debbie or the BTK Killer.

ArtSake: What comes first in your writing process: voice, character, or plot? Or something less tangible?

John: It’s strange but I think my plays spring forth from some sort of structure or event or image: an airplane, a hotel, a song, an image on a container of salt. There is a spark that helps me see the world of the play. Once I imagine the rules of the world, and what’s inside it, I begin to imagine what sort of people might be in it, and what they might be doing.

ArtSake: Were any artists – theatrical or otherwise – particularly influential to you as you wrote Annotated History?

John: Well, The Captain and Tennille, I guess! I was listening to “Muskrat Love” a LOT!

ArtSake: You’re also highly regarded for your work as an actor. When you’re approaching a project from one angle (actor, writer, etc.), do your other performing arts “hats” inform the way you work? 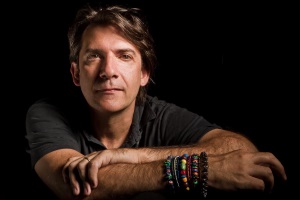 John: I think being an actor helps me immensely as a playwright. Actors just instinctively understand what works on stage and what doesn’t. They understand character, and action, and how people go about getting what they want, and the different tactics they can employ. When I’m acting in my own plays (which I love to do) it actually helps me understand the play. It’s like being inside a gigantic clock: you can see all the cogs and the wheels turning and if something is broken and needs to be fixed.

ArtSake: What’s the most surprising response you’ve had to your work?

John: I can never tell how someone might respond to what I’m doing, or if they will have a response at all, so I guess I’m always surprised. I remember once during a talkback of Waiting for Godot, amidst all the recondite commentary on Beckett, a woman in the audience remarked that I had “nice legs.” I didn’t know what to say, so I said “thanks!”

ArtSake: I’m sure you’ve had many, many memorable experiences as a theatre artist, but is there one that stands out from all the others (for good or for ill)?

John: There is a great story when I was performing The Pillowman at The New Rep. It’s a pretty upsetting piece of theatre and towards the end of the play this man in the front row just stood up and cried “That’s it!” and he stormed out into the lobby and pulled the fire alarm. It was a pretty crazy thing to do: all the lights came on and sirens went off and this recorded voice was telling us all to evacuate. It was a Friday night. A full house. Everyone scurried outside, and the actors and the audience were just hanging out together waiting for the firetrucks to show up. When they did, all the firemen ran towards me, because I was covered in stage blood and they thought I was injured. We cleared that up and the alarms went silent, but we weren’t allowed back into the theatre for some reason. I forget why. The funny thing was: half the audience thought that the play actually ended that way: with sirens and an evacuation. But about 20 or so audience members hung around: they didn’t want to leave, because they wanted to know how the play ended. So the actors all got together in the lobby and we performed the end of the play for them, and took our bows. It was something I will never forget.

ArtSake: The unauthorized biography of your life is titled:

The Annotated History of the American Muskrat by John Kuntz will be performed by Circuit Theatre Company at the Calderwood Pavillion at the Boston Center for the Arts (thru August 16).

John Kuntz is a a playwright, actor, director, teacher, and solo performer whose accolades include Elliot Norton and IRNE awards, New York International Fringe Award, and the Michael Kanin and Paula Vogel National Playwriting Awards. He is a founding member of The Actors Shakespeare Project and has performed with the A.R.T., SpeakEasy Stage, Huntington Theatre, Boston Playwrights Theatre, Commonwealth Shakespeare Co., and many others.

Images: still from THE ANNOTATED HISTORY OF THE AMERICAN MUSKRAT, courtesy of  The Circuit Theatre Company; John Kuntz, photo by Joe Mazza of Brave Lux Photography.