You are here: Home / artist voices / Jendi Reiter, on Winning

The 2011 Commonwealth Reading Series of events with MCC writers and poets continues this week with a reading at Forbes Library in Northampton on Wednesday, March 23, 7 PM.

One of the featured writers at the Forbes is Jendi Reiter (Poetry Fellow ’10), who recently won the Anderbo Poetry Prize. Once a practicing lawyer in New York City, she now writes – and champions – poetry and prose in Northampton, MA, and here, she shares her winning approach to the writing life.

ArtSake: Divulge your secrets! I frequently see your name as a finalist or winner of writers’ prizes (including, obviously, the MCC fellowship). What’s your winning formula? 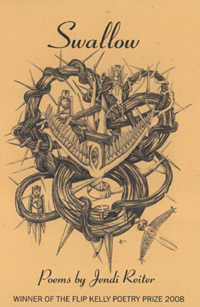 Jendi: Be a good reader. Know what makes one publisher’s style different from another. Target your work.

I credit my high school, St. Ann’s School in Brooklyn Heights, for a fantastic training in how to read poetry. I’ve never gone in for the standard creative writing class where you share your drafts in public and a random group of people pick them apart. I think poets can get far more benefit from wide reading in literature and literary criticism, on their own or in a teacher-guided setting, with the goal of developing a refined intuition about what makes Sylvia Plath, for instance, sound different from Anne Sexton. This skill will then help you understand, first, whether your own work has an original voice and what that voice is, and second, which magazines and presses are publishing work that is sympatico with that voice.

Jendi: Back in 2001, my husband Adam Cohen and I were living in NYC and working for large publishing companies – Adam as circulation director of the Atlantic Monthly, and myself as an editor at Facts on File News Service. It was becoming clear that we would be happier as entrepreneurs than as middle managers in a large organization. We’re both pretty opinionated and independent people! Besides that, I wanted the freedom to focus on my own writing. Every other career path I tried felt like a compromise to pay the bills.

So we brainstormed about what we could do that would pool his considerable skills with computers and direct marketing, and my expertise in the creative writing market. The Internet had developed to the point that an online publishing business was feasible and affordable for us.

We initially thought that the “fun part” would be an online anthology of our favorite poems from literary journals, rather like Poetry Daily. But how would it pay for itself? Like most subscribers, I suspect, I buy Poets & Writers Magazine for the contest guidelines, and view the editorial features as a bonus. To make our product a must-have, we needed to create our own contest directory, only better – searchable, with live links, complete formatting guidelines, and background information on the winners and judges.

And (venturing where more cautious institutions feared to tread) we got the notion to rank the contests based on how prestigious they appeared to be, and how favorable their terms were (e.g. prize/fee ratio, scale of marketing efforts for your book, simultaneous submissions rules). Beginning poets often make the mistake of submitting to the most famous contests, where their chances are poor. Scam contests also prey on these inexperienced writers. We’ve always felt our mission is to serve all segments of the poetry community, from happy amateurs to literature professors, and help them succeed in the market niche that is right for them. Our rankings are one tool for this purpose.

That anthology of reprints never happened, but the five poetry and prose contests we administrate have generated a large online library of exciting original writing, from flamboyantly off-color humorous verse to true tales of life on the battlefield.

Ten years later, we have over 35,000 subscribers to our free newsletter, from all over the world, who are eager to share their publishing successes with us. It’s a wonderful counterbalance to the isolated life of the creative writer. We love doing this work!

ArtSake: Along with your poetry, you also write fiction and nonfiction. Do you approach writing prose differently from the way you approach poems? 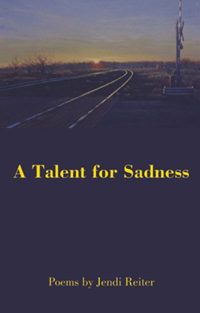 Jendi: Yes, definitely! Poetry and fiction must be written by hand with a mechanical pencil in a 6×9 Mead Five Star notebook. Nonfiction, by which I mean my blog posts about gay rights and Christianity, is written on the computer. I don’t know how to shape a narrative in creative nonfiction. There are too many facts, and most of them were hard enough to live through once.

When I write poetry, I’m not thinking about an audience. What wants to be written, gets written. It’s like a computer’s self-diagnostic. I write to find out what I think. Naturally, my values and preoccupations are reflected in the poetry, so in that sense, it often contains a critique of society, but it’s driven by my own need to express my authentic inner experience, rather than to have a particular impact on others. (Though I wonder whether the two are really so separable – doesn’t every self-disclosure cherish a tiny hope of being recognized and responded to in kind, however much one tries to cultivate self-protective detachment?)

My novel-in-progress is about a young fashion photographer in 1990s NYC who struggles to reconcile his faith and his sexual orientation. With this project, I have more of a conscious intention to bring about social change, along with telling an entertaining story.

Writing a novel is harder than poetry because it’s impossible to be in the “flow” for that length of time. With a poem, by the time I figure out where my subconscious is taking me, the trip’s over. I don’t have much opportunity to get in my own way. Far more planning has to go into the novel, which means that there are many chances for self-consciousness and ideological agendas to seize control, instead of letting the work tell me, itself, what it needs to be. I counteract this problem by conceiving of the novel as a collaborative effort between myself and my characters. They’ve got to retain the freedom to surprise me. My job is to see enough of the big picture so that they don’t get lost and despondent, but not be so directive that they lose their independent life force. It is a constant, elaborate, frustrating, fascinating dance that calls on all my relationship skills, and maybe even improves them in the so-called real world.

I do my creative writing by hand because this slower, temporally linear method allows intuition to take the lead. Writing on the computer, it’s too easy to pull back and see the big picture, to let the analytical mind start rearranging and criticizing, and skip past that quiet inwardness where the soul of the poem or story gestates.

ArtSake: Your poetic voice is truly idiosyncratic. Is the uniqueness of your language something you cultivate? Something innate to you as a writer? Some of both?

Jendi: I am a weird, smart person and a lot of difficult things have happened to me. 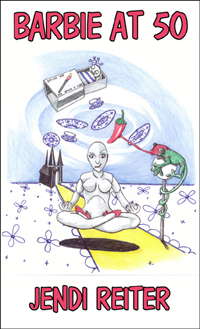 ArtSake: Your poem “Barbie at 50” is just the blend I love in literature – funny, irreverent, but at the same time almost unbearably sad. Where did that poem start for you?

Jendi: I should probably be on that TV show “Hoarders” because of the number of dolls I have. Like my poem, which you described so insightfully, dolls seem to me to combine playfulness and sadness. They can’t give a voice to the emotions that their faces and bodies are designed to suggest. Thrift-shop dolls are the best. They were loved once, but time moved on and left them behind. The unfinished quality of their stories makes them a great writing prompt. And of course Barbie symbolizes so many of the contradictions of woman-as-doll: the power of beauty and the powerlessness of being an object designed to please others. Middle-aged Barbie has to learn to make the best of events that were outside her control, and find, I hope, a kind of strength and even panache in that.

ArtSake: What writers and poets are you excited about, these days?

Jendi: I have a poetry crush on Ariana Reines – her first collection, The Cow (Fence Books, 2006), was a huge influence on my chapbook Swallow, in that it gave me permission to explode the limits of language and self-consciousness in order to be true to some powerful, embodied, grotesque yet sacred-feeling emotions. Lara Glenum and Arielle Greenberg’s anthology Gurlesque includes all this plus fabulous pictures of decorated animal skulls and tongues dripping with glitter – what’s not to like?

A lot of the work that comes out of Fence Books excites me because their authors’ voices are unique, though I can’t say I always understand them. Nick Demske’s self-titled collection is one example. From Wave Books, I liked Dorothea Lasky’s AWE and Mary Ruefle’s The Most of It, both of which arrive at spiritual clarity in a very roundabout, Zen-like way, by playfully demolishing our everyday concepts yet enjoying the texture of the detritus, that is to say, without the self-righteous asceticism we associate with the high priests of religion or (for that matter) poetry. To hold my attention, poetry that is experimental or “difficult” must have some humor in it, some physical pleasure in language. It shouldn’t simply be punishing the reader or testing her intelligence.

At the other end of the accessibility spectrum, I was incredibly charmed and nourished by the formalist, pastoral poetry in Charles W. Pratt’s From the Box Marked Some Are Missing, a recent release from Hobblebush Books in New Hampshire. Temple Cone’s No Loneliness (FutureCycle Press) is reverent but unsentimental about rural life. I enjoy the frankness and magnanimity of working-class poetic voices like Jeff Walt, Michael Meyerhofer, and my good friend Ellen LaFleche, whose collection Workers’ Rites was just selected by Dana Gioia for the Philbrick Poetry Prize.

For classics, I return (not as often as I should) to the favorites of my teenage years, Richard Wilbur, W.H. Auden, Anne Sexton, and T.S. Eliot.

My prose reading list is pretty consistent: queer/feminist theology, gay male short story anthologies, and mystery novels. I’ve tried to branch out but I always wind up muttering about “straight male privilege” and “depressing endings” and then I pick up another Mary Higgins Clark at the thrift shop.

Jendi Reiter‘s first book, A Talent for Sadness, was published in 2003 by Turning Point Books. Her poetry chapbook Swallow won the 2008 Flip Kelly Poetry Prize and was published in 2009 by Amsterdam Press. Her poetry chapbook Barbie at 50 won the 2010 Cervena Barva Poetry Chapbook Prize and was published that year by Cervena Barva Press. Her work has appeared in Poetry, The Iowa Review, The New Criterion, Mudfish, Passages North, American Fiction, The Adirondack Review, Cutthroat, The Broome Review, FULCRUM, Juked, The Sow’s Ear Poetry Review, Clackamas Literary Review, Alligator Juniper, MARGIE: The American Journal of Poetry, Phoebe, Best American Poetry 1990 and many other publications.