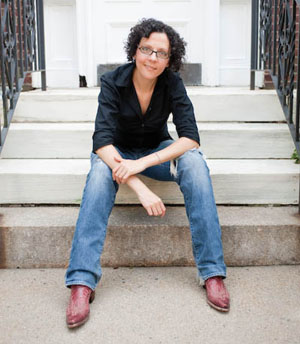 Alexandria Marzano-Lesnevich is writing her first book, a personal narrative about a Louisiana death penalty case, and she recently received some conspicuous encouragement. She won a 2010 Rona Jaffe Award, a $25,000 grant given to emerging female writers.

Alexandria lives in Jamaica Plain, and it turns out the prestigious award she’s just won has a nice, ongoing relationship with Massachusetts literature. Past local awardees include Sarah Braunstein (2007), Carin Clevidence (2004), and Ploughshares editor-in-chief Ladette Randolph (2002). And when Alexandria is formally honored for her achievement tonight at the NYU Lillian Vernon Creative Writers House, the evening’s guest will be Jane Brox, a past MCC Artist Fellow.

Alexandria, who will read at the popular Four Stories series in Cambridge on October 18, was kind enough to check in for an ArtSake nano-interview (presumably using a computer newer than a Commodore 64 – see answer 3).

What’s the best/worst day job you’ve ever had?
Best and worst are actually the same: I was a balloon girl at the Lincoln Park Zoo in Chicago. The job involved the holding of thirty large, animal-shaped mylar balloons. I loved the serenity of it: strolling the zoo’s winding paths, watching the animals, watching people smile at the sight of so many balloons. One summer afternoon, a preschool summer camp walked by me, each kid holding hands with a buddy. One of the counselors said, “There’s the balloon girl! Let’s get her!” The kids dropped hands and piled on me. I lost every single balloon. I radioed headquarters and told them I’d been mugged by midgets.

Were President Obama to create a cabinet post in the arts, whom should he appoint as Secretary?
I think we’ve all agreed that Marilynne Robinson should basically win everything.

Computer, longhand, or typewriter?
Computer. I wrote a novel on a Commodore 64 as a kid, and the combination of screen and keys feels the closest to a conduit for thought. Having said that, I mourn the loss of the typewriter’s aesthetics. For example, who gets a tattoo of a computer keyboard?

Do you secretly dream of being a) a pop icon, b) an algebra teacher, and/or c) a crime-solver/writer a la Jessica Fletcher?
I spend enough time reading court transcripts that it ought to be (c). But it’s (a), as any regular at my local karaoke bar (the Midway) can tell you. Specifically, I would really, really like to be Springsteen.

Share a surprise twist in the Alexandria Marzano-Lesnevich story.
I feel like the surprise twists keep coming, most recently with this award! But let’s go with my mother’s response when I informed her that her daughter planned to take a perfectly good, freshly minted Harvard JD and use it to become an unemployed writer: “Thank God, I never thought you’d be happy as a lawyer.” I’ll always be grateful she said that. (Though I do sometimes wish she’d spoken up before I racked up three years of law loans!) I should add that my mother’s a lawyer, as is my father, one sister, and one brother-in-law. They know from whence they speak.

How many revisions does your work typically go through?
I’m a tinkerer, sometimes for better and sometimes for worse but almost always for annoying, I imagine. Between the time Kim Stafford chose my essay “In the Fade” for the Annie Dillard Award at Bellingham Review and the time Bellingham actually published it, I think I sent them four new drafts – and they obviously liked the first submission well enough! I’m always happy when I see an author’s note in a collection that stories previously appeared somewhere “in different form.” My brethren!

Alexandria reads as part of the Four Stories Reading Series at the Enormous Room in Central Square, Cambridge, on Monday, October 18, 7 PM, with music starting at 6 PM.

Alexandria Marzana-Lesnevich received her JD from Harvard Law School in 2005 and her MFA from Emerson College in 2009. Her prose, both fiction and nonfiction, appears or is forthcoming in Bellingham Review, Fourth Genre, and Southeast Review, among other publications. She has received the Annie Dillard Award in Creative Nonfiction, the Ragdale Foundation’s Alice Hayes Fellowship for social justice writing, and a Millay Colony residency fellowship. Currently, Alexandria lives in Jamaica Plain, Massachusetts, and teaches creative writing at Boston’s Grub Street.