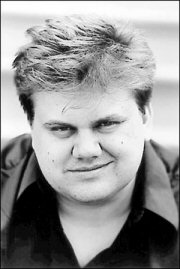 It’s not uncommon for artists to contribute to a region’s literary community from various angles, but even so, Jaime Clarke‘s contributions are particularly well-distributed. He’s a writer (one published novel and another soon-to-be), editor of various anthologies, founder and former editor of the literary journal Post Road, and to top it off, co-owner of one of the Boston-area’s most active and renown literary centers, the independent bookshop Newtonville Books.

Jaime’s next novel, Vernon Downs, is being published by Roundabout Press in April 2014, using a unique financial model that uses pre-orders to cover publishing costs. We caught up with Jaime to ask him about that model, about the book and its origins, and about Jaime’s adventures in book-writing/editing/selling/championing.

ArtSake: Word has it Vernon Downs was inspired by your own interest in/friendship with the author Bret Easton Ellis. Can you talk about the novel’s origins?

Jaime: All true. I saw the midnight showing of Less Than Zero as a teenager in Phoenix and immediately sought out the book. I was staggered to know that it was written by someone in college and published when the author was merely twenty-one. The idea that someone close to my own age was doing what I wanted to do obsessed me, and that’s how I discovered Bret’s work. And then the controversy over the publication of his third novel, American Psycho, was incredible. (The book was dropped at the eleventh hour by his publisher, Simon & Schuster, and then bought and published by Vintage.) It just seemed incredible that a book was having that kind of impact on society, like books did in the early part of the century. All of this fed my ambition to go to Bennington (I attended the low-residency MFA program) and to find my way to New York City, where I met Bret, who was completely generous to me as a young writer. I remember I asked him to read the novel I was working on and Bret not only read it thoroughly, he annotated it heavily with suggestions to improve it dramatically. That novel came close to being published a couple of times and maybe one day it will be.

I lost touch with Bret after I left New York in 2000, though I never lost interest in him as a writer. As I got older, I started to think about the idea of a famous writer as a mentor to a wannabe and how every protege/fan is one part assassin. I loved the idea of using my acquaintance with Bret as background for a story about young writer’s admiration for another and everything that that means. So I wrote a draft of Vernon Downs in 2005 or so. Bret read it and liked it, but I remember his abiding comment was that the character based on him didn’t have the kinds of flaws he has in real life and he encouraged me to really explore that more. Then I got married, rescued a bookstore with my wife (Newtonville Books), edited some anthologies, etc., so the manuscript languished until I showed it to Dan Pope at Roundabout. He liked the bones of that old draft and because so many years have passed, I realized I could have another chance to not just take Bret’s advice into account, but to enrich the narrative with all I’ve learned as a writer and reader over these last eight or so years. 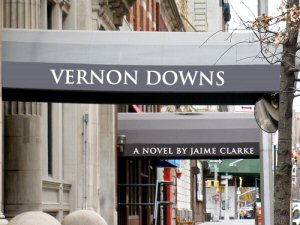 ArtSake: I’m always interested in the journey of a book from concept to completion. How close is the Vernon Downs being published to the book you’d initially conceived?

Jaime: The notion of mentor/protege exists, and some of the scenes from the original where the protagonist actually believes he’s Vernon Downs made it into the revision, but the book is hopefully a much deeper exploration of these ideas than before.

ArtSake: Roundabout Press is using an intriguing model to publish your book: it will be published in April 2014, and the publisher is using pre-orders of the book to generate operating funds. As someone with multiple perspectives on the book industry, what drew you to this unique model?

Jaime: Roundabout used Kickstarter to publish its first book, The Fourth of July by Kevin Dowd. Rather than do something like that for Vernon Downs, I wanted to use my position as a bookstore owner, author, small press lover, literary magazine publisher, etc. to try to really help establish Roundabout financially. So Dan Pope and I came up with the idea of selling pre-orders exclusively through Roundabout’s site, with all monies going to Roundabout not just to help produce Vernon Downs, but hopefully to help publish other books by other writers. I won’t get any royalties on any of the pre-orders sold between now and next April. And as an incentive, Roundabout will send a pdf of my essay “B.E.E. & Me” (an obvious allusion to U and I by Nicholson Baker) to everyone who pre-orders a copy of Vernon Downs. Hopefully this idea of authors being cooperatively invested will catch on among small publishers. With all the recent contraction in conglomerate publishing (next year the Big Six publishers will become the Big Five with the merger of Random House and Penguin), now’s the perfect time for the Rise of the Small Press. Technology has made it possible for publishers to hang their shingle, and there’s plenty of material out there good enough to be considered, but they need money. Publishing is an expensive proposition, as I know from Post Road. So I’m really trying to spread the word about the pre-order program with Roundabout.

Jaime: I wish! I can see the kinds of books that publishers dish money out to publish every day at work, but I’m not interested enough to try to emulate them, regardless of the riches. As for the latter question, my wife (co-owner Mary Cotton) and I are both keenly interested in literary fiction, so most of the authors we host are of this variety, and we keep their books on our shelves.

ArtSake: You’re a founding editor of the literary magazine Post Road. What’s the most important thing for a writer to keep in mind when submitting his or her work to a prospective editor?

Jaime: You’ve probably heard this before, but the most important notion is that a rejection isn’t personal. There are all kinds of external factors having nothing to do with your work that have a lot of bearing on whether or not the work is accepted for publication. For literary magazines, space is a big one. We would sometimes get long pieces we loved, but we had no way to publish them. When editors reject work and say it doesn’t fit their needs at that particular time, they’re probably telling the truth.

ArtSake: I don’t want to get you in trouble here, but from your time running Newtonville Books, do you have a favorite author visit experience?

Jaime: This question IS ripe for danger as we host so many writers who’ve become friends over the years, and we think of them as family at this point, so each is its own wonderful experience. But I think they would all agree with this answer: we hosted George Saunders (in March) for Tenth of December when he was in town for the Associated Writing Program conference and it was an unforgettable evening. He gave a terrific reading, but the Q&A session after was magical. He clearly loves interacting with his readers and he did not disappoint.

ArtSake: Another dangerous question to ask a bookseller, but what are you currently reading?

Jaime: I went to a state school, so I’m perennially catching up on the classics. Ladette Randolph just hosted a discussion on Anna Karenina for our Celebrity Bookclub, so I read that for the first time. And Holly LeCraw did the same with All the King’s Men by Robert Penn Warren, so that’s what I’m currently reading. We have a bookclub with friends that meets in hotel bars and we just read The Intuitionist by Colson Whitehead. Veronica by Mary Gaitskill before that.

Jaime: I’m still working on the revisions for Vernon Downs. At some point, I’ll have to let it go, but not yet!

Vernon Downs by Jaime Clark will be published by Roundabout Press in April 2014 and is being supported through pre-orders via Roundabout’s Web site.

Jaime Clarke is a graduate of the University of Arizona and holds an M.F.A. in creative writing from Bennington College. He is the author of the novels We’re So Famous and Vernon Downs, editor of Don’t You Forget About Me: Contemporary Writers on the Films of John Hughes, and Conversations with Jonathan Lethem, and co-editor of No Near Exit: Writers Select Their Favorite Work from Post Road and, with Dennis Lehane, of Boston Noir 2: The Classics. He is a founding editor of Post Road and has taught creative writing at the University of Massachusetts, Boston, and Emerson College.