You are here: Home / artist to artist / How Do You Choose Your Titles? 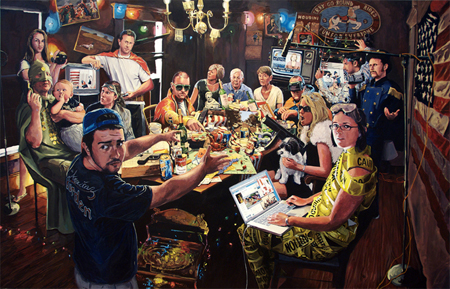 We’ve been exploring issues artists encounter in their work, and we recently asked artists in different disciplines: How do you choose your titles?

Paul Endres, Jr, painter
Being a painter in a digital age is, at least in part, a contradiction. Many artists might also suggest that providing titles to their visually-based art is also a contradiction of sorts, or at least unnecessary, and in some cases I would agree. However, my work is the descendent of a specific niche of art history, 19th century history and portrait painting, one that not only requires titles, but also depends on them to explain the narratives or patrons.

My work is an ongoing series of paintings about an alternate reality in which a disastrous unseen event known as the American Burden is causing destruction and civil war. The paintings exist as memorials to these events; fictional historical artifacts. So for me, at this time and making this work, naming a piece is like the planets aligning, in that there are many criteria to fulfill. The titles must further complicate the image by providing an additional context, give insight into the narrative, and to hint at the illogical nature of the individuals of this reality, who like us, thrive on contradiction.

Jason Palmer, jazz composer
I’ve always found it to be as big a challenge to adequately name a composition as it is to write it, especially if I’m composing purely for the sake of composing, and not for a particular project. Luckily I’ve always found inspiration for titles from people, places, and events that I’ve related to. I’ve used “plays on words” as titles (especially if it happens to be a “quirky” melody). I’ve come to find that my compositions usually resonate with the listener to a stronger degree if they have a catchy title and a story that conveys the inspiration for the title.

Kathryn Burak, author of Emily’s Dress and Other Missing Things
To my mind, the best title is taken. Picnic, Lightning, Billy Collins’s fourth collection of poems, took the prize a while back. Collins’s title comes from a line in Lolita. “My very photogenic mother died in a freak accident (picnic, lightning) when I was three.” Who would think the best title in the world would be tucked into parentheses in chapter two? (Okay, Billy Collins would.) So, when my editor, Nancy Mercado, told me the sales and marketing team decided my very quiet title, The Dress, needed to reflect the excitement in the plot – the road trip! the mystery! – I automatically said, “Sure. As long as we can find a Picnic, Lightning.” Though Nancy agreed having a perfect title would be nice, she admitted that she wasn’t sure how much a title might make or break a book – providing you don’t hit the apex, as Collins did.

Before this request to retitle my book came, I had joined a collaborative marketing group for debut YA writers (The Class of 2k12), and we had already printed up a mass mailing advertising my quiet title. I quickly sent word that the new batch of posters and postcards to librarians should have my new, more action-packed title, How People Disappear. It wasn’t until my third and final title got the okay, months later, from sales and marketing (Emily Dickinson needed to be a part of the title, they thought) that I realized how many different books I was promoting with my group – three books, or at least three titles – on bookmarks, mass mailings, and websites. Oh, and the current title – Emily’s Dress and Other Missing Things – everybody shortens it to Emily’s Dress. Not that far off the original.

Masha Obolensky, playwright
I know some writers who start with the title. I never do. Coming up with a title is always challenging for me. It is often something I do when I find myself lost. So I throw down the gauntlet – what is at the heart of this play, Masha? Say it in a few words. A few years ago I wrote a play about girls and desire and after I had completed a first draft I brought it to my class at Boston University. Hearing my cohorts’ comments, I realized that I was walking a fine line and that what I had written could easily be misinterpreted. I decided to entitle it The Girl Problem. It’s not mysterious like my other titles – this one definitely positions me, the writer, in relation to the material. Giving the play this title helped me to sharpen the play, while allowing me to keep the ambiguity that had elicited so many different interpretations among my classmates.

Read part two of How Do You Choose Your Titles? featuring a choreographer, poet, glass artist, and painter.