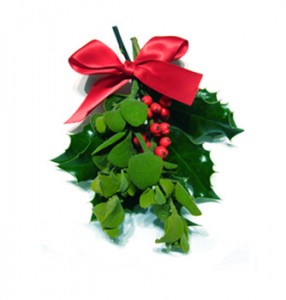 Opportunities await beneath the sprig.

Writers Before Columbus Foundation‘s American Book Awards are given annually for books published in the United States during the preceding year that make contributions to American multicultural literature. Submit two copies of a book published in 2012. There is no entry fee. E-mail for complete guidelines.
Deadline: December 31, 2012

Photographers The Center for Photography at Woodstock, NY, is currently accepting entries for their Photography Now 2013 exhibition. This year’s juror is Kira Pollack, Director of Photography at TIME Magazine. Learn more.
Deadline: January 22, 2013

Call to Artists The Brush Gallery in Lowell, MA is currently accepting entries for their Massachusetts Artists 2013 Exhibition. Solo show in 2014 awarded to best in show. Entries include 2-dimensional or 3-dimensional work, including paintings, drawings, photographs, monoprints, mixed-media and sculpture. They are not accepting video, crafts or installations in this exhibition. Learn more.
Deadline: February 3, 2013  (4:00 pm)

Photographers The Photography Center of Cape Cod, a program of the Cape Cod Art Association, is holding a photography competition, Doors, Gates & Windows: What Is on the Other Side.
Learn more.
Deadline: April 7, 2013 (midnight)