You are here: Home / painting / Hannah Barrett Struts Her Stuff 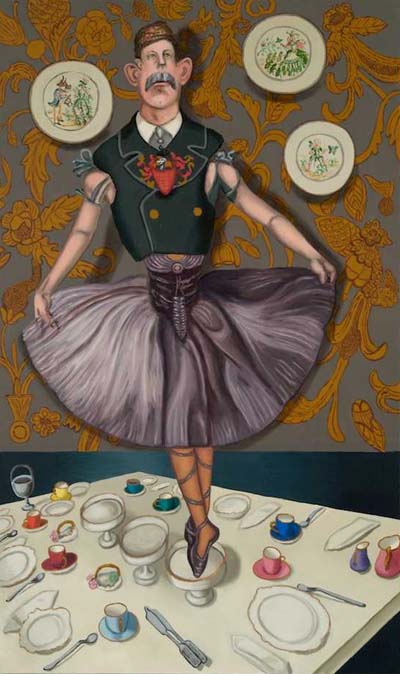 Hannah Barrett (MCC 2004 Painting Fellow), well known for her gender bending portraits, has created a site-specific series of six portraits for Boston’s Gibson House Museum. The Gibson House Museum is a Back Bay row house constructed in 1859, which opened as a museum in 1957, and features three generations of Gibson family possessions and original interiors.

Hannah’s work aims to create portraiture that deviates from the conventional male or female, and to explore the resulting pictorial and conceptual possibilities. Her current exhibition, Tales from the House of Gibson, was inspired by the Gibson House Museum’s founder Charles Hammond Gibson, Jr. The six portraits on display illuminate relationships among family members, objects, and places using Hannah’s signature collage style.

Barrett sums up her aims this way:“The Gibson House feels crammed with history, but it also has an atmosphere of eccentric imagination, which suggests all sorts of stories: a séance, a dinner party, a card game and so on. Through the characters and scenarios I tried to capture this feeling of imminent dramatic possibility.”

Gibson House Museum Executive Director Charles Swift says “The Gibson House is thrilled to have worked with Hannah on this project. House museums are often thought to be frozen in time, but her portraits breathe new life and energy to the museum’s collections, and provide us with a new way of looking at how history is created.”

Hannah’s work has been shown at Boston’s Museum of Fine Arts and the DeCordova Museum, among other institutions, and she has had solo exhibitions at Howard Yezerski Gallery, Clifford Smith Gallery, and Green Street Gallery. She currently teaches at Pratt Institute in Brooklyn, NY.