George Fifield is the founder and director of Boston Cyberarts, Inc., a nonprofit arts organization, which produces the Boston Cyberarts Festival. The 2009 festival takes place April 24 – May 10 at dozens of locations across Greater Boston.

We asked George to offer some insight as to how the region came to be known as a nexus of art and technology.

The Boston Cyberarts Festival came about as I began to understand the incredible history of art and technology that had occurred in the Greater Boston area. At this time in the mid 90s, I was writing a column for Art New England, and in my search for ideas, I slowly came across this history. Of course, th

is made perfect sense as Boston has always been a center for technology. Boston is where the future is beta-tested.

But the convergence of this technology with art came about in the 1960s. One program was the WGBH New Television Workshop, officially founded in 1972. Though video artists were mostly working in New York, the first television presentation of this work was a WGBH show called The Medium is the Medium in 1969, which presented six video artists to a national audience.

Subsequently, WGBH started an artist-in-residence program allowing video artists in the television studio to use the equipment for the very first time. The first artist in residence was Nam June Paik, who while here invented the Paik Abe synthesizer, the first machine that controlled the distortion of the existing video signal. This synthesizer was distributed around the world. This led to the New Television Workshop, through which hundreds of well known and aspiring artists came to make work.

The first-ever video art exhibit in a museum, Vision & Television, occurred at the Rose Museum in Waltham in 1970.

M.I.T. has germinated many programs of technological art, including the Architecture Machine Group, the Center for Advanced Visual Studies (CAVS), the Visual Language Workshop and the Media Laboratory. CAVS, established in 1967, was especially famous for the number of important artists who worked and visited there. Boston area art schools are well known for the excellence of their art and technology courses. 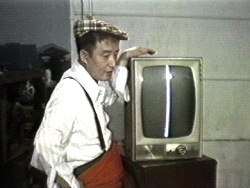 Boston companies that specifically advanced the technology of art were numerous, like Avid and Z-Corp. Some followed a tradition of working directly with artists to develop their technologies, following the close relationship between Dr. Edwin Land and Ansel Adams in developing the Polaroid camera.

But while digital art works were being presented and exhibited by a select number of Boston area organizations, there had not been a major event highlighting the art and the artists combined with a public education effort. So the Boston Cyberarts Festival was created in 1999 to recognize and celebrate this long tradition of innovation in the arts and focus attention on local artists in this important field.

Today, this region is known worldwide as having one of the highest concentrations of digital artists, including key innovators. Its academic institutions have built up excellent departments in digital art, new media and electronic music. The digital media industry, especially computer game development, has grown and added an important component to the creative economy sector.

The Festival can take no credit for the concentration of digital artists who live here the area is a great place to be an artist, with ample exhibition and performance opportunities and many jobs, including teaching for support. But I do believe the Festival can take some credit that the world knows about us.