You’re strolling around your city, and you see this cartoon-inspired painting. 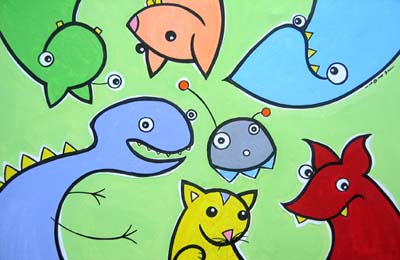 Then you see the attached note saying the painting is free, with one catch. So you take the painting, follow its instructions, and with that… you’ve joined Bren Bataclan’s Smile Boston Project.

We asked Bren Bataclan, a street artist like no other, to guest post and describe his effort to use his paintings to lift the corners of a few mouths in cities across the map.

This month marks the fifth year anniversary of Smile Boston Project. I still can’t believe that I am now painting full-time and that the street art project is now global. When I first started in the fall of 2003, I thought that my project would last for just a couple of weeks. 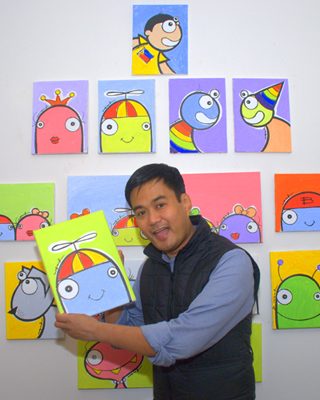 I began painting these cartoon characters that I have been drawing since I was a kid back in the Philippines during the summer of 2003. Back then I was one of those unemployed ex-dotcommers affected by the economic crash (that was nothing in comparison to today’s crisis). I had plenty of time that summer to get to know my childhood imaginary friends again and explore painting them on canvases (they were just rendered as drawings prior to this venture). I premiered my cartoon inspired acrylic paintings during CAOS (Cambridgeport Artists Open Studios) and to my surprise 49 out of 56 paintings sold during that summer!

The practical thing to do after such a successful show was to look for a job. My confidence was skyrocketing, and I was just truly elated. I would have won over anyone at any interview. Instead, I poured back the money I made during CAOS into my very first street art project. I grew up in San Francisco, and so I was exposed to a lot of graffiti. Though I was (still am) a huge fan of street artists, I was not the type of kid who would spray paint a wall. And so an idea came to me while in bed at 2 AM in the morning a few days after CAOS… Why not leave paintings for folks to take for free all over Boston? I didn’t want to vandalize nor to wait for a gallery show. So I decided to use the city as my exhibit space.

Aside from wanting to do my own street art, my other goals were to expose people to art who normally do not go to galleries or museums and to give original art to folks who may not be able to afford them. I also thought that giving away my pieces would be a great way to thank Boston for purchasing so many paintings in just two days.

I also wanted to see more smiles in New England. I was in the Midwest for grad school prior to moving here to teach at UMASS Amherst, and I was missing the warm interactions and eye contact. I complained about the lack of smiles in Boston for almost a decade. But that all changed when I saw Bostonians smile when they saw my paintings. In many ways, this was the catalyst for the Smile Boston Project. I told myself to stop complaining and to be proactive. And so for five years, I have been leaving paintings for folks to take for free with a note saying, “This painting is yours if you promise to smile at random people more often,” across the country and around the world. Below are feedback and photo samples from my recent Smile Chicago Project.

Know what? After doing Smile Boston Project for five years, I was proven wrong. Bostonians are friendly– they are just different from the Midwesterners or Californians. I’ve since ceased to complain. How can I not? I feel the love here in Boston… I am a full-time artist during this economic disaster! What more can I ask for? This is the best job I have ever had.

With that in mind, I am altering my street art project for a while. Instead of leaving my smile-related note, I will now tape a different one saying, “Everything will be alright.” I can’t think of a better way to uplift peoples feelings than to give free paintings during the Wall Street Blues. Look out for free paintings this month because I will be leaving them all over Boston and NYC! 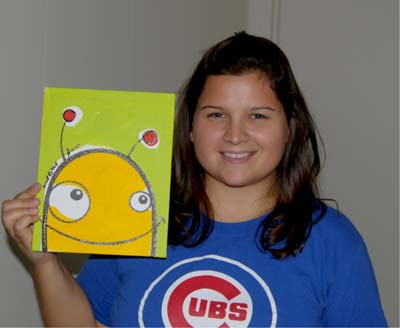 I’m a 19 year old college student who lives in Chicago… I was out on a jog when I stumbled upon one of your paintings. I glanced at the bench in disbelief. I had heard of this project before and couldn’t believe my luck. I had a problem though. I had just started my run and still had about a mile to go. Do I take it and risk ruining it by clutching it tightly? Or do I leave it and if it’s here on the way back it’s meant to be. I made a deal with myself. Smile at everyone on the rest of my run and if it’s still here you can take it. If it’s gone, at least you smiled. Well I imagine I looked pretty funny sprinting down Columbus with a smile plastered on my face, but when I got back it was still resting just where you left it. I was so happy. I snatched it up and skipped home… My older brother and I are going on a backpacking trip around the world this summer. We’ve scrimped and saved enough to just get by and maybe be able to eat every once in a while. But I’ll be sure to smile at every one I see. Thanks for all your great work. I admire your strength and determination to spread love and respect in the world. Laura 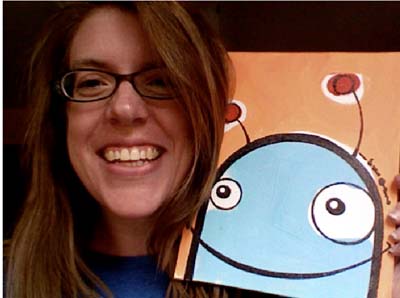 Dear Bren, I was running some errands in the rain today when I spotted one of your paintings (the cutest little blue guy, sporting a big smile and a pair of red antennae). I stood there a minute and read and re-read the note, making sure it was really OK to take it–and then yoink! it was mine. Not only that, but then as I kept walking down the street, I smiled at someone who (now that I see your photo on the site) might have been you. Thank you for the painting, and for putting a smile on my face! I will keep up my end of the deal! What a wonderful way to put good energy into the world. I feel so lucky. xo Anne 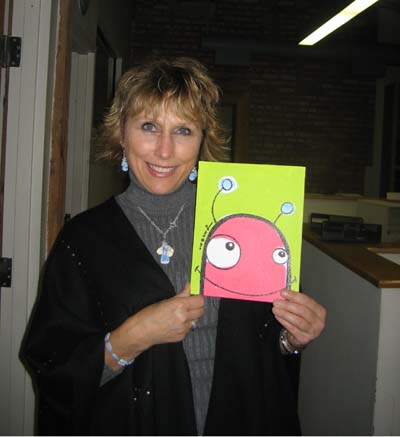 Thank you for brightening my return to work on this rainy Chicago day!! I will take very good care of my whimsical little guy. And, ironically I AM a SMILER!!! and I will definitely pay it forward over and over again. Susan