John Ewing is interested in sparking public dialogue. And he does so the way he, as a public artist specializing in digital media, knows best: through interactive, boundary-pushing art.

The Virtual Street Corners project connects Coolidge Corner, Brookline with Dudley Sq, Roxbury through 24/7 video teleconferencing. The project, which you can read about in a terrific interview in The Atlantic, inspires spontaneous conversations by passers-by in both neighborhoods as well as planned discussions by artists, politicians, and other community figures from each neighborhood. 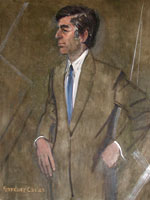 Tomorrow (Friday, June 25, at 5 PM), former Massachusetts Governor Michael Dukakis will visit Virtual Street Corners. He’ll discuss his recent projects, share his perspective on the relationship between Brookline and Dudley Sq., and engage in dialogue with State Senate candidate Carlos Henriquez and Union of Minority Neighborhoods Executive Director Horace Small about what can be done to strengthen the relationship between the two communities.