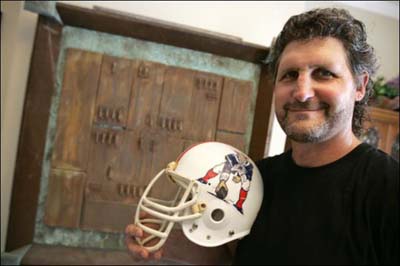 The Salem News writer Alan Burke has penned an article about the artist Marshall Harris, a former New England Patriot defensive end who once wore the proud red, white and blue logo on his helmet.

“Squish the fish!” Actually I don’t really advocate squishing any fish at all. And by the way, dolphins aren’t fish either, so it’s clear that creative license abounds in sports chants. Score one for the arts!

MARBLEHEAD He might have the body of a defensive end but even in his playing days, under all those pads, beneath that battered helmet, Marshall Harris carried the soul of an artist. The fact is, he’s been both. Harris, 52, was a sought-after defensive end who honed his football skills under the Friday Night Lights of East Texas, specifically a high school in Fort Worth. Later, he excelled in the game at Texas Christian University and then in the early ’80s for the Cleveland Browns, New England Patriots and New Jersey Generals of the now-defunct U.S. Football League.

Yet, even during all the time he spent knocking heads, Harris wanted to be an artist. When he could, he studied art and created art.

“I’ve always drawn and painted,” he says. “Somewhere between two-a-days.”

Currently, he’s devoted himself to unusual sculptures. “You look at my work and say, ‘What the hell is it trying to say?’ But if you know the subtext, it’s kind of neat.” He hopes to mount a show soon, but concedes that some of his efforts are so large that space is a problem.

Just as he once felt “wired” to play football, now he is addicted to art.

“It’s just something I cannot not do,” he says. This creativity speaks to something deep within. “Take my life. Turn it upside down and give it a good shake. That’s my art.”

This devotion to art explains how the 13-year Marblehead resident got named recently by the selectmen to the Marblehead Cultural Council. Even at that, the board couldn’t help asking about his past on the gridiron. Harris stressed his single season 1983 with the Pats.

He played with Steve Grogan, John Hannah, Andre Tippett and Steve Nelson. “The classic Patriots,” he says. He doesn’t follow the game closely anymore, “I’ve got a job. I’ve got kids. I don’t have 412 hours to take out of my life.”

Yet, he still speaks about it with passion.

“Football is a game unlike any other in the world,” he says. “It’s structured like no other game that exists.” Eleven men take the field, but then something remarkable happens for those few moments after the ball is snapped. “For 2.3 seconds, you have 11 people coming together.” They respond as one. They move as one. “To defeat the play.”

He dismisses the notion that European soccer, for example, is somehow superior because it appears less violent. “The violence there is in the stands.”

Harris’ big season was in Cleveland, 1980 to ’81, when the Browns’ Kardiac Kids clawed their way into the playoffs by winning a succession of games with last second victories. Also in the closing seconds, they lost a memorable playoff game to the Oakland Raiders. Harris recalled, “The temperature was 22 degrees below zero.”

The USFL might have seemed like a minor league, but Harris believes his New Jersey Generals could have played in the NFL. “I actually sat in (owner) Donald Trump’s office. I met the Donald.”

At least on the surface, a lot of Harris’ past seems far behind him. He’s still very fit, a robust 6 feet tall, 6 inches. But he’s lost much of his Texas accent. “I see my sister,” he laughs, “and she says, ‘You talk funny.’ And I say to her, ‘Listen to you.'”

The more time he spends in Texas, Harris says, the more that twang comes back. He’s committed himself to Marblehead, however, as director of Marshall Harris Studios, a visual communications company. In addition, he runs a business that does odd jobs called My Handy Hubby.

Art, more than football, dominates Harris’ life today though he notes that the tenacity and energy he brought to the game has helped propel his sculpting.

“A lot of people dismiss (the arts),” he says. It’s often the first thing school systems cut when they want to save money.” But again and again, art is the signature that past generations have left behind, have been remembered for.

“As early as when we could scratch a piece of charcoal on the wall of a cave we have had art,” he says.

It probably predates even football.