Contrary to popular belief, artists don’t pack up their practices for the month of October so they can concentrate solely on churning out witch-crashed-into-a-tree decorations for Halloween.

No, they keep doing great stuff like this. Here’s what past MCC Artist Fellows and Finalists are up to this month: 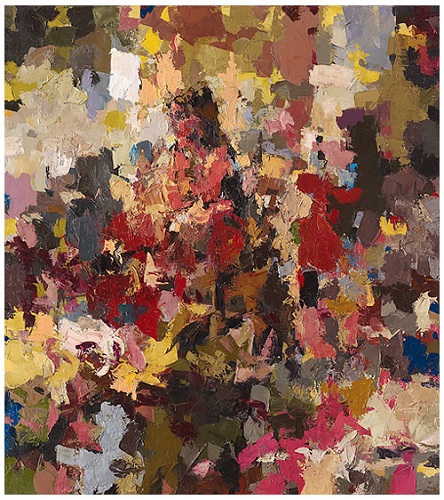 Camilo Ramirez (Photography Fellow ’09) and Irina Rozovsky (Photography Finalist ’09) are among the photographers included in Transcend the Ordinary at The Aviary in Jamaica Plain. The show, which features explorations of the rituals and routines of ordinary life, runs October 6-30, 2011, with an opening reception Thursday, October 6, 7-9 PM, coinciding with Jamaica Plain’s First Thursday.

Rosanna Yamagiwa Alfaro‘s (Playwriting Fellow ’11) new play Before I Leave You premieres at the Huntington Theatre Company, running October 14-November 13, 2011. Read an interview with Rosanna on the Huntington’s blog. In it, she says one of the key turning points in her career was “this year, when at 72 I became a Huntington Playwriting Fellow, received a MCC Artist Fellowship, and was given a slot in the 2011-2012 Huntington Theatre Season. My son Pablo said, ‘It sounds like the beginning of a brilliant career.'”

Liza Bingham (Painting Finalist ’10) is among the artists in the Contemporary Landscape Invitational at Higgins Art Gallery at Cape Cod Community College in Barnstable. The show runs October 17-November 10, 2011, with an opening reception October 27.

Alice Bouvrie‘s (Film & Video Fellow ’11) documentary Thy Will Be Done screens at Lesley University‘s Marran Theater in Cambridge on October 12, 2011, at 7 PM.

Shawn Cody (Playwriting Fellow ’07) has launched a fundraising campaign on IndieGoGo to bring his musical theatre work The Water Dream to Broadway.

Janet Echelman‘s (Crafts & Sculpture/Installation Fellow ’09) spectacular work is on the cover and in the pages of the September ’11 Sculpture Magazine. 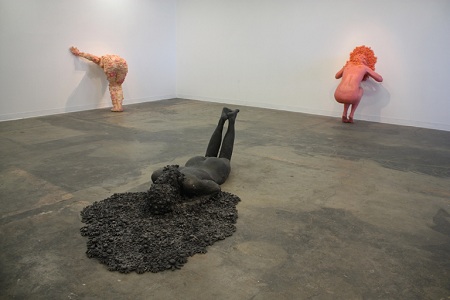 Tory Fair‘s (Sculpture/Installation Finalist ’11) solo installation, Testing a World View (Again) is on exhibit at the deCordova Sculpture Park and Museum in Lincoln, MA through April 29, 2012. In the Boston Globe, Cate McQuaid shares her impressions of the work.

Pagan Kennedy (Fiction/Creative Nonfiction Fellow ’10) recently finished a year-long fellowship at MIT for science journalists. Her science-infused nonfiction can be found in a recent New York Times piece on “cyborg” technology and a Boston Magazine story on a local genius in the art of lockpicking.

Lisa Kessler (Photography Fellow ’11) has work in the Danforth Museum New England Photography Biennial 2011, up through November 13. She’ll have an Artist Talk on Wednesday, October 19, at 12:30 PM. Lisa’s photographs are also currently on view at the Dubois Gallery at Lehigh University, PA, Women Photographers, Selections from the Lehigh University Art Galleries Teaching Collection through December 2011. In August, the artist spoke on a panel about contemporary photography with Brian Clamp of ClampArt NYC, Susan Danly, Curator of Photography at the Portland (Maine) Museum of Art, and George Kinghorn, Curator and Director, University of Maine Museum of Art, Bangor.

Jesse Kreitzer (Film & Video Finalist ’11) has launched a Kickstarter campaign to raise funds for his independent feature film, The Wake. The film, which was recently selected as a finalist for the 2012 Sundance Institute’s Screenwriter’s Lab, is the story of a grief-ridden social worker who cares for a dying woman in secrecy from his wife and two children. 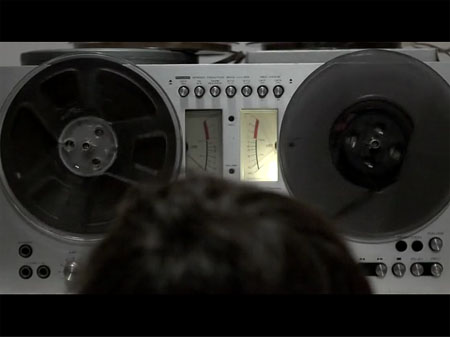 Kathryn Kulpa (Fiction/Creative Nonfiction Finalist ’10), editor of Newport Review, is among the writers participating in “An Evening in New Bedford with the Newport Review” at Gallery 65 on William Street, as part of AHA New Bedford. The reading, which takes place on October 13, 2011, at 7 PM, includes readings by Kathryn, Lisa Borders, and others, including a open mic. (Writers planning to do the open mic should arrive by 6:30 PM.)

Caitlin McCarthy (Playwriting Finalist ’11) did a video interview while attending the 2011 Action on Film International Film Festival. She discusses her feature script CAPE COD LITE (which won the “Best Drama” screenplay award at AOF), as well as her new TV series teleplay “Pass/Fail.”

Congratulations to Caleb Neelon (Sculpture/Installation Fellow ’07), who recently won an Awesome Grant from the Boston branch of the Awesome Foundation.

Mary O’Malley (Drawing Fellow ’06) is among the artists featured in Wild Things: Contemporary Art Inspired by Nature at the Art in the Round Barn at the Green Mountain Cultural Center in Vermont. The show, curated by Stephanie Walker of Walker Contemporary, runs through October 15, 2011. Mary recently participated in the Porter Mill Open Studios on September 24, 2011, at the new Porter Mill artist studio building in Beverly. 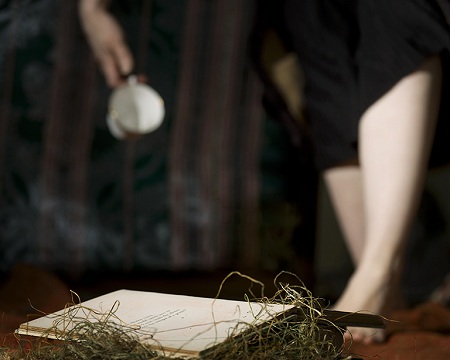 Toni Pepe‘s (Photography Finalist ’11) work is included in the New England Photography Biennial 2011 at Danforth Museum in Framingham, and she has an upcoming solo show, The Gesture of Tradition, at the University of Notre Dame Art Gallery in Indiana. Also, Toni has organized a conference taking place at Boston University, this month. Think Art: Memory (October 14-15, 2011) is an interdisciplinary conference that brings together scholars and artists to explore the manipulation of memory and how the individual and society remembers.

Daniel Ranalli (Drawing Fellow ’10) is included in a major fall exhibition at the Institute of Contemporary Arts/Boston, Dance/Draw, curated by Helen Molesworth. The exhibition, which runs through January 16, 2012, includes works from Daniel’s Snail Drawing series (images from that series won the artist the MCC fellowship). Daniel is also participating in the ICA’s 75 Artists for the 75th exhibition, as well.

Monica Raymond‘s (Playwriting Finalist ’07, Poetry Finalist ’08) play A TO Z, which recently won the 2011 Ruby Lloyd Apsey Award, had a staged reading at the Kennedy Center in Washington, DC as part of their annual Page-to-Stage Festival on September 3, 2011.

Matthew Rich‘s (Painting Fellow ’10) “Woodcut Parallelogram” was acquired by the MIT List Visual Arts Center. The print was published by ningyo editions, which currently has on display New Woodcuts by Matt Rich and Joe Wardwell through October 14, 2011.

Evelyn Rydz (Drawing Fellow ’10) is among the Massachusetts College of Art and Design faculty members featured in Selections 11, October 10–December 7, 2011 in the Stephen D. Paine Gallery at MassArt.

Jeff Warmouth (Sculpture/Installation Finalist ’05) has a solo exhibition at the SHOW Gallery and Performance Space in Staten Island, NY. The show, called SuperJeffuBurgerMarket, runs through October 29, 2011.

Debra Weisberg (Drawing Fellow ’08) has a solo show at Gallery Kayafas in Boston, Dystopian Dreaming: Constructed/Glow Drawings by Debra Weisberg, running October 22-November 26, 2011. There will be an opening reception Saturday, October 22, 5-7 PM. (The gallery will also be open First Friday, November 4 until 8 PM.) 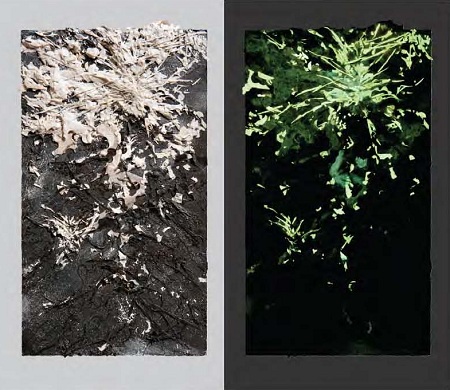 Cary Wolinsky (Sculpture/Installation Fellow 09, collaboratively with TRIIIBE, is included in More Back Forty at The Art Complex in Duxbury. Cary will exhibit a new body of work at the show, which includes recent work by artists who have exhibited at the Art Complex over the past 40 years. The show runs through January 15, 2012.

Images: Joshua Meyer, WOPBOPALOOBOPBALOPBAMBOOM, oil on canvas, 36 x 40 in; promotional image for BEFORE I LEAVE YOU by Rosanna Yamagiwa Alfaro at the Huntington Theatre Company; still from THE WAKE, a film in progress by Jesse Kreitzer; Toni Pepe, INSTALLMENT FIVE (2010), Archival Inkjet, 40×30 in; Debra Weisberg, GLOW DRAWING 2: DAY VIEW AND NIGHT VIEW (2010), paper tape, photoluminescent tape, glow powder, polymer on museum board, 9×5.5 in.