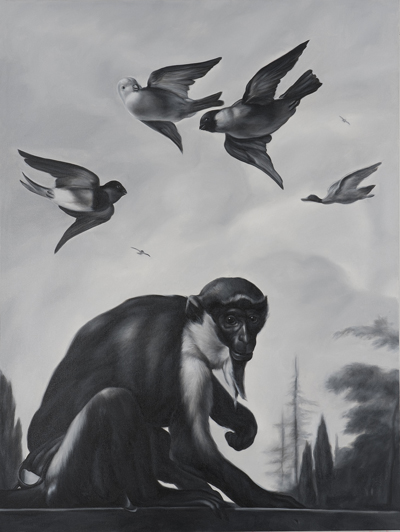 Caleb Cole, Dana Filibert, Shelley Reed, and Sarah Wentworth are among the artist exhibiting in Fertile Solitude at the Mills Gallery at Boston Center for the Arts (10/14-12/18, opening reception 10/14, 6-8 PM). The exhibition, curated by FLUX.Boston creator Elizabeth Devlin, explores the idea of reprieve from everyday life through the physical framework of a maze that exhibition visitors are free to explore.

Sachiko Akiyama has a solo exhibition of paintings and sculptures, Sachiko Akiyama: Between Here and There, at Matter & Light Fine Art (thru 10/31).

Alice Bouvrie is screening her film A Chance To Dress at MIT (10/13, 7 PM). The filmmaker along with the subjects of the film, Dr. John “Tephra” Southard and his wife, Rev. Jean Southard, will be present for a post-screening Q & A.

Matt Brackett‘s first solo show in Boston in four years will take place at Alpha Gallery (10/7-11/2, opening reception 10/7, 6-8 PM). One of the included paintings, Moonstone, was one of 35 works out of over 2,400 applicants to receive a Certificate of Excellence in the Portrait Society of America’s International Portrait Competition last spring. See the artist’s Studio Views post on ArtSake.

Charles Coe is among the artists selected for the Boston Artists-in-Residence Program.

Mary Jane Doherty will have the West Coast premiere of her documentary Primaria at the San Francisco Dance Film Festival (10/23, 2 PM).

Tory Fair has a solo show of drawing/sculpture hybrids, Tory Fair: Paperweight at VERY in Boston (thru 10/22).

Georgie Friedman has unveiled a site-specific video installation at the Strand Theatre in Dorchester, Traces of Wind and Water (thru 11/14), part of her work as a City of Boston Artist in Residence Program. There is a Boston AIR reception 11/14 at the Strand.

Beth Galston has a solo show at the Cynthia Reeves Gallery in North Adams (thru 11/13).

Marky Kauffmann was invited to participate in the Berlin Foto Biennale after being named a finalist in the 2015 Julia Margaret Cameron Award for Women Photographers. Also, she’ll exhibit in the group show Mirror with a Memory at the Peter Miller Gallery in Providence, RI (10/20-11/12, opening reception 10/20, 5-9 PM).

Lisa Kessler received a George Gund Foundation commission to photograph in the Cleveland public schools. The photography collection will be on exhibit at the Cleveland Public Main Library in downtown Cleveland (thru 10/28). A smaller traveling exhibit will be on display at several library branches around the city.

Niho Kozuru has a solo show, Positive Vibration, at Miller Yezerski Gallery (thru 11/15).

Dawn Kramer, along with Stephen Buck, will participate in this year’s Roslindale Open Studios (10/22-10/23).

Yary Livan was featured in the Lowell Sun.

Melinda Lopez has a new play, Mala, at ArtsEmerson (10/27-11/20). Also, she contributed a short play to Still Waiting a series of vignettes created to accompany the play Waiting for Lefty at Boston College Robsham Theatre (10/13-10/16).

Tara Masih is the Series Editor for the annual Best Small Fictions series, which just published the 2016 edition.

Rania Matar has photography in the exhibition Mortal Things: Portraits Look Back and Forth at Tufts University Art Center (thru 12/4). Her solo show Becoming: Girls, Women, and Coming of Age exhibits at Pictura Gallery in Bloomington, IN (10/7-11/26, opening reception 10/7 5-8 PM, artist talk 10/11, 7 PM). In December, that same gallery will exhibit Rania’s work in Pulse Miami. Her work is included in Aftermath: The Fallout of War – America and the Middle East at Harn Museum of Art in Gainesville, FL (thru 12/ 31. artist talk 10/23, 2 PM) Her work is also exhibiting at Galerie Janine Rubeiz, Beirut Lebanon and at C. Grimaldis Gallery

Mary Bucci McCoy is in the experimental group exhibition Fiction (With Only Daylight Between Us) at boeckercontemporary in Heidelberg, Germany (10/15-31). Also, she will have a public conversation with Brooklyn artist David Mann at Rafius Fane Gallery in SoWa, Boston (10/8, 2-4 PM).

Richard Michelson was featured in WBUR Radio for his children’s book about Leonard Nimoy, Fascinating.

Nathalie Miebach is in the group show Intersections: Artists Master Line and Space at Akron Art Museum (thru 1/15). Also, she’ll give a talk at Ohio Wesleyan University (10/19, 7 PM) as part of the Sagan National Colloquium.

Ethan Murrow has a large-scale wall drawing in Escape Routes at the John Michael Kohler Art Center in Sheboygan, WI (thru 1/15). See an interview about the process.

Samuel Rowlett has a solo exhibition of recent multimedia work, A Thing Not Planned for Imagery or Belief, on view in the South Gallery at Greenfield Community College (thru 11/3). There will be a gallery talk 10/26, 12 PM, and a closing reception 11/2, 5:30-7 PM.

James Rutenbeck‘s film Class of ’27 is an Editor’s Pick from The Atlantic.

Jane Smaldone‘s exhibition Rocks & Roses and The Return of the Fox shows at Clark Gallery in Lincoln (thru 10/31).

Stephen Tourlentes has work in the group exhibition Surveillance at The Nelson-Atkins Museum of Art in Kansas City, MO (thru 1/29).

Joe Wardwell has a solo show at LaMontagne Gallery in Winchester (thru 11/11) and another exhibition, Soon I Will Be President at Southern New Hampshire University McIninch Art Gallery (11/3-12/17, opening reception and artist talk 11/3, 5-7 PM).

Angela Zammarelli is exhibiting in the group show The Unity of Opposites at A.P.E. Gallery in Northampton, MA (thru 10/30, opening reception 10/14, 5-8 PM). She is currently in residence at The Studios at MASS MoCA and will be participating in an open studios 10/19, 5-7 PM.

Images and media: Shelley Reed, ON THE WALL (AFTER HONDECOETER) (2010), oil on canvas, 48×36 in; Alexandra Anthony’s interview from the 40 Years of Fellowships Project.