Wouldn’t it make more sense if they named the eighth month of the year, rather than the tenth month, October? I just thought of that…

(Actually I just checked Wikipedia, and it turns out October was the “eighth month in the old Roman calendar.” They just kept calling it that after it became the tenth month, like how we all still “dial” a phone number even though dials are long gone with old Roman calendars…)

Anyway, this October, tenth month of the year, check out the latest news and notes from past Artist Fellows and Finalists. 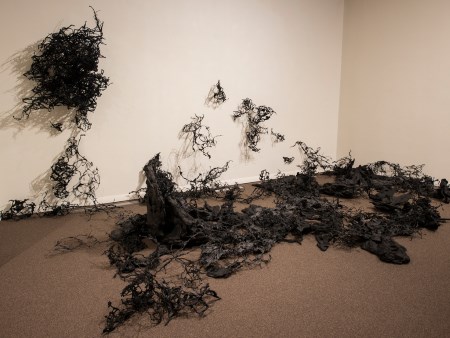 Alexandra Anthony‘s film Lost in the Bewilderness is an Official Selection in the Arlington International Film Festival, screening at the Kendall Square Cinema on 10/16, 2:55 PM, q&a with the director to follow. It will also screen at the Wellesley College Collins Cinema on 11/5, 6 PM, q&a to follow. The film is also an Official Selection of the London Greek Film Festival in England (10/19-10/25).

Steven Bogart is directing the play Dry Land at Company One, Plaza Theatre, Boston Center for the Arts (10/2-10/30). Watch a trailer.

Alice Bouvrie‘s new documentary A Chance to Dress will screen at the Arlington International Film Festival at the Kendall Square Cinema, 10/19, 7:30 PM, q&a with the director and with the film’s subject Dr. Southard and his wife Jean to follow.

As director of the Provincetown Community Compact, Jay Critchley organized the 28th annual Swim for Life in September, which raised an estimated $200,000 for AIDS, women’s health & the community with the support of 404 swimmers, 75+ kayakers and safety boats and 150 volunteers.

Georgie Friedman‘s large-scale sculptural video installation Eye of the Storm, on view in the Roberts Gallery at Lesley University’s Lunder Arts Center thru 11/1, was featured on a segment on CBS News, Boston.

Duncan Gowdy has work in A Long Engagement: Wendy Maruyama and Her Students at the San Diego State University Gallery (10/9-10-30, opening reception 10/9, 6-9 PM).

Zehra Khan has work in Last Stop Vacationland at artSTRAND in Provincetown (thru 10/12). Also, she designed the 2015 Provincetown Swim for Life image.

Brian Knep created two large Healing Pools for the Illuminus nighttime contemporary art series in Boston’s Fenway 10/3-10/4. Also, work from his Worms/Traces series (made while he was artist-in-residence at Harvard Medical School) are exhibiting in Sizing It Up: Scale in Nature and Art at Peabody Essex Museum in Salem, MA (thru 9/18/16).

Sandy Litchfield has work in the upcoming exhibition at the Fitchburg Art Museum, Land Ho! (thru 1/10/16).

Nathalie Miebach has a solo show at Peeler Arts Center in DePauw University in Greencastle Indiana (10/27-12/11), has work in Off The Charts: Exploring Climate Change through the Arts at 516 ARTS in Albuquerque, NM (thru 10/31), and will give artist talks at the FutureM Conference, Hynes Convention Center in Boston (10/7) and DePauw University (10/29). She was also recently a guest on the BBC Forum radio show on the topic of Wind.

James Morrow presents an evening of dance, Sweaty Epiphany, at the Dance Complex in Cambridge (10/23-10/24, 8 PM). In August, the artist launched a crowdfunding campaign to support the performance. Read about the event on ArtSake.

Monica Raymond has a monologue from her play The Owl Girl included in the new published Best Stage Monologues for Women 2015 from Smith and Kraus.

Laurel Sparks has a solo show, Rubedo at Kate Werble Gallery in NYC (thru 10/24).

Joan Wickersham has a story in The Best American Nonrequired Reading 2015 anthology, published this month.

Cary Wolinsky produced the film Raise the Roof, directed by Yari Wolinsky, and it screens this month in a number of cities, including in Boston the The Vilna Shul Center for Jewish Culture (10/4, 7:30 PM) and at Temple Emanu-el in Providence (10/24, 7:30 PM).