This month, while the sunshine ebbs, the news from past awardees of MCC’s Artist Fellowships shines ever shinier. 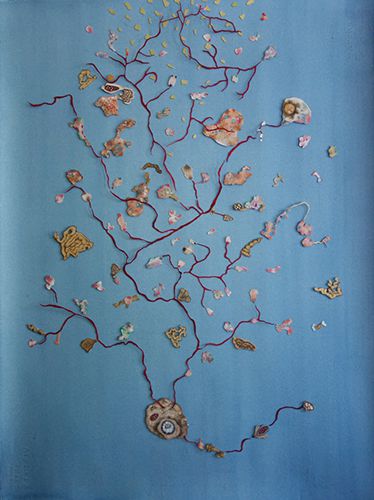 In October, the Mayor’s Office of Arts and Culture and the Massachusetts College of Art and Design (MassArt) announced that 11 artists were selected for the City of Boston’s first artist-in-residence program, Boston AIR, including Peter DiMuro (MCC Choreography Fellow ’90), Georgie Friedman, Caleb Neelon, and Liz Nofziger.

Congratulations to the ten artists named as 2015 Brother Thomas Fellows, including past MCC awardees Raúl Gonzalez III, Masako Kamiya, Balla Kouyaté, and Danielle Legros Georges. The Fellows receive unrestricted grants of $15,000 through a fund established at the Boston Foundation in 2007 to honor the legacy of Brother Thomas Bezanson, a Benedictine monk and world-renowned ceramic artist.

Warren Mather and Janice Redman join Janice Jakielski in the show Not Really Practical at the Trustman Gallery at Simmons College (11/9-12/14, reception 11/12, 5-7 PM).

Alexandra Anthony recently had the U.K. Premiere of her film Lost in the Bewilderness which won the Odysseus Award for Best Creative Documentary at the London Greek Film Festival. The film garnered a positive Boston Globe review when it screened in the Arlington International Film Festival in October, and it will screen at the Wellesley College Davis Museum (Collins Cinema) 11/5, 6 PM, q&a with filmmaker to follow.

Congratulations to Alice Bouvrie, whose documentary film A Chance to Dress won Best Documentary Short at the Arlington International Film Festival in October.

Laura Chasman has two portraits in the exhibition Director’s Favorites: 1999- 2015 at the New Britain Museum of American Art in CT (thru 1/3).

Patrick Donnelly has his inaugural reading as Poet Laureate of Northampton on 11/1, 4 PM, at the Smith College Neilson Library. He was Mass Poetry’s Poet in the Spotlight for October.

Vico Fabbris will teach Watercolor and Inventive Thinking at the School of the Museum of Fine Arts, Boston for a five-week course (11/2-11/30).

Raúl Gonzalez III, along with winning at Brother Thomas Fellowship (see above), will have a solo show, Regalo, at the Boston University Annex Gallery (thru 12/13).

Eric Gottesman will celebrate the US launch of his new photography book Sudden Flowers at Foto DC, 11/8, 5 PM.

Deborah Henson-Conant, whose musical compositions are woven into several of the MCC’s 40 Years of Fellowships videos, wrote a great blog post about the impact of her two Massachusetts Artist Fellowships, in the ’80s.

Congratulations to Elizabeth James-Perry, who won an inaugural Rebecca Blunk Fund award from the New England Foundation for the Arts. The awards are grants of $2,500 each in unrestricted support to support the creation of new work and for professional development. The fund is in honor of the legacy of former NEFA executive director Rebecca Blunk, who passed away in 2014.

Ben Jolivet‘s play Cain and Abel had its world premiere at the Wilbury Theatre Group in Providence, RI.

Cristina Kotz Cornejo launches the inaugural Women in Motion Summit at Emerson College this month (11/9), a gathering of women in film/media to discuss experiences and effect change.

Kate Leary‘s story Holy Family will be published in the November 11 issue of Amazon Day One, a weekly literary journal for the Kindle. Day One features just one story and one poem by emerging writers per issue, plus author interviews. A week after the publication, the story will be available as a Kindle Single.

Rania Matar‘s photography book L’Enfant Femme is published this month. The book features an Introduction by Her Majesty Queen Noor of Jordan, an essay by Lois Lowry, author of The Giver, and an afterword by Kristen Gresh, Estrellita and Yousuf Karsh Assistant Curator of Photographs at the Museum of Fine Arts, Boston. This month, her work is exhibiting in the Taylor Wessing Photographic Portrait Prize 2015 exhibit at the National Portrait Gallery, London (11/12-2/21).

Anne Neely has an exhibition of 30 watercolors inspired by living on the coast of Maine, traveling to Ireland for an Artist Residency in County Kerry, and a trip to Japan, called Transforming Place. It’s at The Robert Lehman Art Center at Brooks School in North Andover (thru 12/18).

Dave Ortega‘s 24-page comic Dias de Consuelo Issue I is now available! The publication is the first in a series about the artist’s 100-year old abuela, Consuelo Herrera, beginning in the tumultuous years of the Mexican Revolution. The artist will be participating in Comics Arts Brooklyn (11/7) where he will have copies of the Dias de Consuelo, as well as limited copies of Poor Mexico, a new zine published by Bien Vestido Press.

Naoe Suzuki has a solo exhibition, In Solidarity, at the University of Massachusetts Lowell Art Gallery (thru 11/25). A catalogue of Naoe’s work, Be Water, My Friend will be published this month. Earlier in the year, Naoe won a Pollock-Krasner Foundation grant, which enabled her to work on her project Water, is Taught by Thirst in Berlin and at Blue Mountain Center in the Adirondacks.