This June, our past Artist Fellows & Finalists are exhibiting, publishing, premiering, winning, and just generally being excellent, here and abroad. 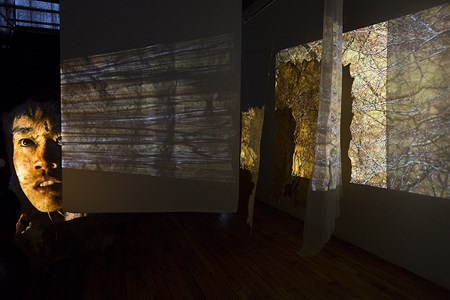 Sandra Allen, Dale Broholm, Todd McKie, and Harold Reddicliffe are among the artists exhibiting in Dynamic Conversations, fine craft furniture paired with distinctive two-dimensional works, at the Dillon Gallery of the South Shore Art Center (thru 7/9).

David J. Bookbinder has signed with the literary agent Stephany Evans of FinePrint Literary Management for his recently completed book Fifty-Two Flower Mandalas, a collection of images and essays that distill into one volume his work as artist and healer.

Sari Boren‘s essay In a Corner of the Hebrew School Classroom is in the Spring issue of Lilith Magazine.

Dana Filibert is among the artists with work in the Peep This empty storefront project in Springfield, MA. Her installation will be at 176 Worthington St until 9/2015.

Patrick Gabridge has published a new novel, Steering to Freedom, about an escaped slave who seeks to convince Abraham Lincoln to enlist black troops in the Civil War.

Ralf Yusuf Gawlick‘s composition Kollwitz-Konnex (…im Frieden seiner Hände), a large song-cycle for soprano and guitar will be the musical centerpiece of the Boston Guitar Fest (The Eternal Feminine) at New England Conservatory (6/20). It will be performed by Soprano Anne Harley and guitarist Eliot Fisk, the festival’s artistic director.

Holly Guran will read from her recently published poetry book River of Bones at the New England Mobile Book Fair in Newton (7/1 7 PM). She’ll also read on 8/1 at the Hunnewell Building of the Arnold Arboretum, with the Jamaica Pond Poets, in conjunction with an exhibit called Arboretum Inspiration: Image and Word, featuring poems by Holly and photographs by Philip McAlary.

Danielle Legros Georges, the Poet Laureate of Boston, was recently profiled in the Boston Globe.

Congratulations to Yary Livan, who was named a National Heritage Fellow from the National Endowment for the Arts!

Holly Lynton‘s photographic series Bare Handed exhibits at Goodwin Fine Art in Denver, CO (6/5-7/18) (read a review of her recent solo show in Miami). She’ll be part of the group shows The Disrupted Landscape at Miller Yezerski Gallery in Boston (6/12-8/15) and Fraction of a Second at 516 Arts in Albuquerque, NM (6/5-8/8).

Rania Matar exhibits photographs at the Carnegie Museum of Art in Pittsburgh, as part of She Who Tells a Story (thru 9/28), a group show that originated at the Museum of Fine Arts Boston. She is also exhibiting in a dual show (with Gordon Parks) called Exposure at Richard Levy Gallery (6/13-7/24, opening reception 6/19, 6-8 PM), and in the group show Fraction of a Second at 516 Arts (6/5-8/8); both shows are in Albuquerque, NM.

Congratulations to DK McCutchen, whose novel in progress Ice has won a Speculative Literature Foundation grant, and whose short story Jellyfish Dreaming will be published in the July ’15 issue of Lady Churchill’s Rosebud Wristlet.

Nathalie Miebach has work in Mapping Knowledge at the Mundaneum Museum in Mons, Belgium (6/27-5/15/16) and in Flight Patterns at The Welch Gallery at Georgia State University in Atlanta, GA (6/4-7/31). Also, she recently completed a commissioned piece for the Troy Boston, a condominium tower in Boston’s South End, and she’ll be giving a talk at the Cannes Lyon Festival in Cannes, France (6/23).

Lisa Olivieri‘s film Blindsided has been selected to show at the OM Film Festival in Kansas City, MO in September. The films for the festival are selected by audience votes, and Blindsided has received more votes than any other film thus far.

Cecilia Raker is co-creator of Shiver: A Fairytale of Anxious Proportions, a devised piece of theater by Project:Project. It premieres at Boston Playwrights’ Theatre (6/19-6/28).

Monica Raymond’s play The Owl Girl won the 2015 Jewish Plays Project‘s Jewish Playwriting Contest-Boston, and placed second in the international competition, with over 200 entrants. Also, her play A TO Z has a reading at Virago Theater in Oakland, California (6/8).

Congratulations to James Rutenbeck who, with Diana Fischer, received a $15,000 Production grant from the LEF Foundation Moving Image Fund for The Clemente Project. The film explores the Clemente Course, a rigorous, college-level instruction in humanities for students from disadvantaged backgrounds.

Carolyn Webb is exhibiting in a three person show, with Betsey Garand and Kathryn Fanelli, in the Jannotta Gallery at Smith College (thru 8/21).

Scott Wheeler, currently on a residency fellowship at the MacDowell Colony, recently performed new compositions for the MacDowell Downtown series.