It’s July: cue the John Philip Sousa and make way for a march of news from MCC Fellows/Finalists. 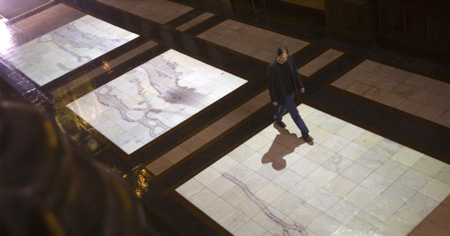 Sophia Ainslie and Stacey Alickman are in the group show NET work: A drawing and mixed media installation at Kingston Gallery (7/5-7/28, reception 7/6, 5:30-7:30 PM), in which individual works by the show’s artists have a variety of interconnections.

Prilla Smith Brackett gave a talk on her work in June 2012, at the New Britain Museum of American Art, where one of her paintings is currently in the gallery of contemporary art.

Martha Jane Bradford is one of the artists selected for the Cambridge Center for Adult Education’s second group of CSArt artists (including an exhibition 7/9-8/31). Also, one of her works was selected for and received Honorable Mention at The Butler Institute of American Art‘s 76th National Midyear Exhibition (thru 8/19). One of her digital drawings was accepted in this year’s “Community of Artists” show at the Danforth Museum of Art (thru 8/5). Her work is also exhibiting online.

Zehra Khan and her collaborator Tim Winn show at artSTRAND Gallery in Provincetown (7/13-7/26), an exhibition of photography-based work from their P-town dune shack residency.

Brian Knep will be showing Deep Wounds at the Aldrich Contemporary Art Museum as part of their ‘united states’ semester of shows (7/15-2/24/13). Commissioned by Harvard University in 2006, Deep Wounds is a large-scale, interactive installation that uses the Civil War as a metaphor for unfinished healing.

Congratulations to Andrew Krivak, whose novel The Sojourn won 2012 Chautauqua Prize. He’ll read from the book in Chautauqua, NY (8/6, 4 PM).

Caitlin McCarthy was featured in the Australian newspaper The Spectator in a story on the DES drug (explored in her screenplay Wonder Drug).

Rachel Mello is part of the Crest Hardware Art Show (thru 8/31).

Joshua Meyer‘s oil paintings will exhibit at Rice/Polak Gallery in Provincetown (thru 7/12).

Liz Nofziger collaborated with Linda Price Sneddon to create Shape of Community, a collaborative installation in commemoration of the 100 year anniversary of the Bread and Roses Strike of 1912, at Essex Art Center (thru 8/16).

Congratulations to William Peters, whose novel Maverick Jetpants in the City of Quality is due October 2012 from Black Balloon Publishing.

Cristi Rinklin‘s solo exhibition Diluvial (read about it on ArtSake) is open to the public at the Currier Museum of Art (thru 9/15). A reception for the exhibition will be held on 8/2, 5:30-7:30 PM, with a concert in the gallery by Shirish Korde, who composed music based on impressions of Cristi’s work.

Nick Rodrigues is part of the group show Making Dollars at Cambridge Innovation Center (thru 11/12).

Congratulations to Anna Ross, who was selected as a Tennessee Williams scholar in poetry at the Sewanee Writers’ Conference.

Peter Snoad‘s short play Perfect Strangers will be part of the “10 X 10 in The Triangle” festival at ArtsCenter of Carrboro, NC (7/6-7/22). Recently, the play won the 2012 short play contest at the Stratford Fringe Festival in the Stratford-Upon-Avon in the U.K..

Rachel Perry Welty collaborates with her mother Sarah Hollis Perry for the installation Water, water at Cape Ann Museum (7/14-9/30). Also, Rachel was interviewed by Blink Magazine, including a portfolio of images from the Lost in my Life series.

Michael Zelehoski currently has work in Jen Bekman Gallery and Dodge Gallery, and he won First Place (and exhibits work) in the 2012 Juried Art exhibition at The Staten Island Museum (all in greater NYC).

Evan Ziporyn is among the artists featured in the Bang on a Can Summer Music Festival at MASS MoCA.