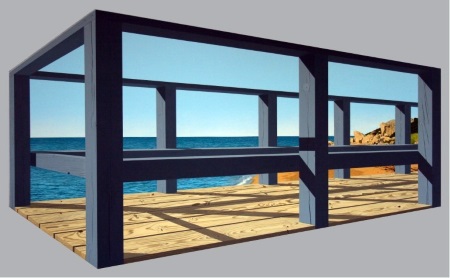 Sarah Bliss, Georgie Friedman, and Jeff Warmouth are among the artist premiering nine new works of art for the latest installment of Art on the Marquee at the Boston Convention in South Boston.

Steven Bogart co-wrote and is directing Pinocchio, an adaptation of the classic tale that incorporates Japanese mythology and performance styles (1/30-2/22), at Wheelock Family Theatre.

Edie Bresler‘s photographic series We Sold a Winner is on view at the University of La Verne in the Irene Carlson Gallery of Photography in La Verne, California (thru 12/12). Read about the series in Slate and in an ArtSake Studio Views.

Congratulations to Ria Brodell, recipient of a 2014 Boston Artadia Award.

Danielle Legros Georges was named the Poet Laureate of Boston.

Jane Gillooly‘s film Suitcase of Love and Shame will screen at the Museum of Moving Image in New York, as part of its First Look festival, on 1/11, 2:30 PM. For First Look, the filmmaker will film the audience at the screening, which in turn will become Audience, screening on 1/18, 3 PM, at the same venue.

Chuck Holtzman has a solo show in the Holzwasser Gallery of the New Art Center, 1/16-2/21.

Congratulations to Kate Leary, who won a Sustainable Arts Foundation award. The grant supports artists and writers with families.

Nathalie Miebach is part of the group show Laboratory at Zuckerman Museum of Art at Kennesaw State University in Georgia (thru 2/21/15).

Monica Raymond‘s play The Owl Girl was named one of the Top 10 Plays in the 2015 Jewish Playwriting Contest. In other news, she wrote the lyrics for the winter song After Harvest (for two sopranos and a harp, music by Timothy Takach), which had its world premiere in December at the Schubert Club in Minneapolis. Also in December, Monica’s short play Novices was performed as part of a student festival at Boston University Student Theater.

Evelyn Rydz‘s work is included in the exhibition Gyre: The Plastic Ocean, which was at the Anchorage Museum in Alaska and is traveling to the David Spencer CDC Museum in Atlanta (1/26-6/19).

Leslie Sills is having an exhibition of new work (mixed-media paintings) in Vicissitudes of Youth at Mobilia Gallery (1/17-2/14, opening 1/24 3-5 PM).