On the eve of the big storm, a blizzard of good news: Feb’s notes and honors from MCC Artist Fellows & Finalists. 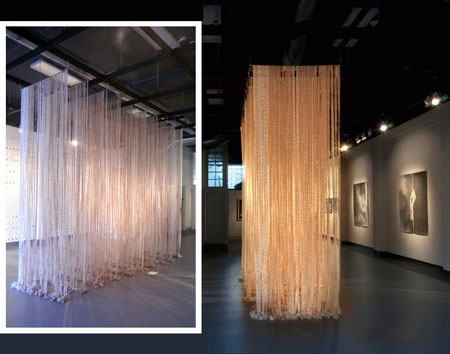 Recent MCC awardee Caitlin O’Neil reviews George Rosen‘s short story collection The Immanence of God in the Tropics for Ploughshares: “he writes with such stark, unadorned clarity that distant places snap into focus.”

Sophia Ainslie has a solo show, in person, in the Main Gallery at Kingston Gallery (thru 2/24). Read the artist’s Studio Views.

Stacey Alickman has a dual show with Lynda Schlosberg, All of It, in the Center Gallery at Kingston Gallery (thru 2/24).

Linda Bond is part of the DEIS Impact! schedule of exhibitions and events at the Brandeis University International Center for Ethics, Justice, and Public Life. Her installation Inventory will be on view through Feb. 8. She discusses “The Artist As Advocate for Social Justice” at the Brandeis Women’s Studies Research Center (2/4, 4 PM).

Jessica Bozek‘s second poetry manuscript, The Tales, won Les Figues NOS contest! Read an interview with Necessary Fiction and watch a video she made for one of the poems from the collection, recently published in The Volta.

Prilla Smith Brackett was a Fellow at the Virginia Center for the Creative Arts in January 2013 – her 5th residency there, over 9 years!

Congratulations to Sarah Braman, who won the Maud Morgan Prize from the Museum of Fine Arts Boston!

Hurray for Kathryn Burak, whose novel Emily’s Dress and Other Missing Things has been nominated for an Edgar Award for Young Adult Fiction!

Sheila Gallagher has received the 2013 Boston College Faculty Award for outstanding contributions to the arts at Boston College throughout the past decade, as well as her professional success and vibrant studio practice.

Alla Kovgan will direct Cunningham, a poetic feature film usig 3-D technology, based on choreographic works of American modern dance icon Merce Cunningham. The film will be produced by Dance Films Association, with support from The Rockefeller Foundation.

Joy Ladin‘s memoir was a finalist for a 2012 National Jewish Book Award, and received a Forward Fives Award for one of the five best Jewish non-fiction books of 2012.

Scott Listfield has a dual show with Jeff Gillette at Gallery 1988 Venice (2/8-2/24). Also, Scott was recently profiled on the web site io9.

Nathalie Miebach is part of a group show called Synergy at the Boston Science Museum (2/15-6/2). Synergy is an experiment in art/science communication, in which visual artists have been paired with ocean scientists from Massachusetts Institute of Technology and the Woods Hole Oceanographic Institution to render complex scientific concepts accessible to the public through art. Also, Nathalie will be speaking in Baltimore on Feb 24 at the American Craft Council Show.

Masha Obolensky‘s play Marvelous Fruit is one of the full-length play finalists for the Source Festival in Washington D.C.

Congratulations to Monica Raymond, who will receive Cambridge Arts Council funding for the creation of Paper or Plastic, a mini-opera on environmental themes.

Peter Snoad‘s short play, Transition, will be produced again at Towne Street Theater in Los Angeles (2/1-2/17) as part of the theater’s 20th anniversary season. Peter’s full-length contemporary play, Raising David Walker, inspired by the life and work of the Black abolitionist, David Walker, will receive a staged reading at the Newark Museum in Newark, NJ (2/23) in a collaboration with the New Jersey Performing Arts Center.

Excerpts from Joyce Van Dyke‘s play Deported / a dream play are performed in London this month.