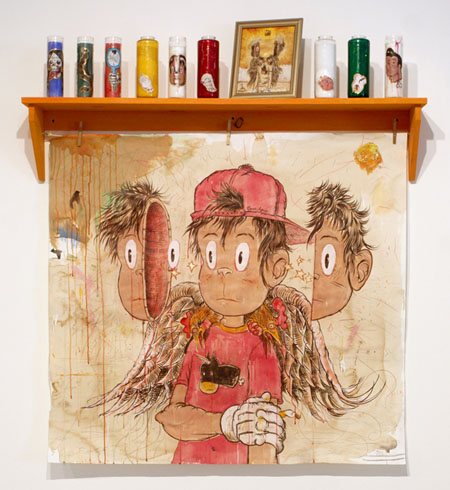 Congratulations to Luis Arnias and Ilisa Barbash, both of whom were among the grantees in the LEF Foundation’s recent round of pre-production funding for nonfiction film projects!

Cheryl Clark Vermeulen, Tanya Larkin, and Anna Ross are among the poets participating in the Boston Poetry Marathon (8/16-8/18) at Outpost 186 in Cambridge.

Caleb Cole has work in a number of current/upcoming exhibitions: Intuit at Texas State University, an exhibition at Schoolhouse Gallery in Provincetown (Title TBA, 8/30-9/18), the Hearst 8×10 Biennial in NYC (thru 8/31), Framed: Identity and the Photographic Portrait at the Photographic Resource Center in Boston (9/3-10/12), Pedigree at the New Art Center in Newtonville (9/12-10/14), and Character Study at deCordova Sculpture Park + Museum in Lincoln (thru 3/31).

Raul Gonzalez‘s solo show Los Nuevos Guerreros is at Carroll and Sons (thru 8/31). Read about it in Juxtapoz.

Michael Hoerman has four poems in the museum of americana.

Caroline Klocksiem has five poems in the Summer 2013 issue of FRiGG: A Magazine of Fiction and Poetry and a poem in Heron Tree.

Rania Matar will be among the artists in She Who Tells a Story, an exhibition of female photographers from the Arab world at MFA Boston. Read more at Huffington Post.

Brendan Mathews has a new story, “This Is Not a Love Song,” in the summer issue of Virginia Quarterly Review (in the same publication as stories by Ann Beattie and Joyce Carol Oates).

Caitlin McCarthy‘s film script Wonder Drug (currently in development) got a nice plug from actress Alysia Reiner in an IndieWire interview about her role on the Netflix series Orange Is the New Black; Reiner calls it an “incredible script.”

Rachel Mello is among the artists in Entering Somerville at Nave Gallery Annex in Somerville (thru 8/31). Explore Rachel’s work on ArtSake. Her window installation “H is for Home” is part of An Alphabet of Inspiration: Artists Celebrate 100 Years of Collections at Boston Children’s Museum, on view through May of 2014.

Monica Raymond‘s new mini-opera, Paper or Plastic (for which she wrote the libretto), was profiled in WBUR’s Artery.

Shelley Reed is now co-represented by Danese Gallery and Sears-Peyton Gallery in NY. She has a show with Danese in the Fall (10/18-11/16).

We wish success to Tracy Heather Strain, who is partnering with Vitamin W, a women-owned online media platform, to fund-raise for her documentary project based on the life of Lorraine Hansberry!

Congratulations to Cam Terwilliger, who will be a Fulbright Scholar in Montreal starting this September. He’ll be researching and writing a historical novel set during the French and Indian War (1756–1763), dramatizing how native people clashed and combined with Europeans throughout the corridor between Albany and Montreal. Cam will be working with McGill University’s Institute for the Study of Canada, as well as the KOR Language and Cultural Center in Kahnawake, the Mohawk nation’s reserve south of Montreal.

Rachel Perry Welty has been accepted at the Elizabeth Foundation for the Arts studio program in midtown Manhattan, so will again have studio space in New York. She’ll speak at deCordova Sculpture Park + Museum about artist Tony Feher (8/1, 2 PM). More news on her Facebook page.