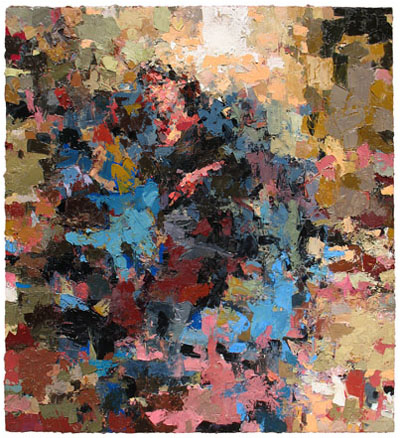 Steve Almond (Fiction/Creative Nonfiction Fellow ’08) visited Here and Now on WBUR radio to discuss his summer music picks, and those of callers-in.

Liza Bingham (Painting Finalist ’10) is among the artists in Free Association, a summer group exhibition for Associate Members of Kingston Gallery in Boston. The show runs August 4-29, 2010, with an opening reception Friday August 6th, 5:30-8 PM.

Lorraine Chapman’s (Choreography Fellow ’04) dance company is among those performing and participating in the Massachusetts Dance Festival, which seeks to successfully establish dance artistically, financially and operationally, throughout the state. Lorrain Chapman The Company will perform at the Boston Ballet on Saturday, August 21, 2010, at 8 PM, and at the UMass Amherst Fine Arts Center on Saturday, August 28th, 2010 at 8 PM. 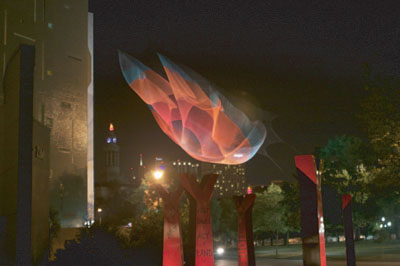 This July, Janet Echelman’s (Crafts & Sculpture/Installation Fellow ’09) Biennial of the Americas was unveiled in Denver. The work is suspended between the Greek Theater and the Denver Art Museum in Denver’s Civic Center Park.

Christopher Faust (Painting Fellow ’10) is among the artists in On the Road, an exhibit of artwork inspired by the road, running through August 27, 2010, at the Suffolk University Art Gallery at NESAD. The show was curated by Gallery Director James Hull.

Jane Gillooly (Film & Video Fellow ’07) will screen Today the Hawk Takes One Chick on August 16, 7 PM at the Brattle Theatre in Cambridge, as part of the DocYard series of contemporary documentary films. Also, Jane received a pre-production grant from the LEF Foundation for her film-in-progress The Suitcase of Love and Shame.

Rebecca Meyers (Film & Video Fellow ’09) has been hired as film coordinator for ArtsEmerson. Rebecca will program films related to ArtsEmerson’s live performing arts series, as well as “other independent, repertory and foreign films, a student-curated series, classics, and regular screenings of films for children.” (News via the HubArts blog.)

Caleb Neelon (Sculpture/Installation Fellow ’07) is among the artists in The Boat Show, an exhibition in the Drive-by Gallery in Watertown. Drive-by is the new gallery of Beth Kantrowitz (formerly of Allston Skirt Gallery) and Kathleen O’Hara (formerly of OH+T Gallery). 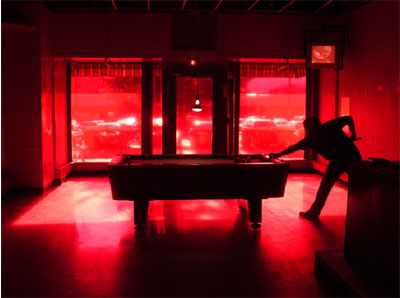 Work by Daniel Ranalli (Drawing Fellow ’10) will be on exhibit at DNA Gallery in Provincetown, August 13 – September 1. The show, which also includes work by Tabitha Vevers and Peter Hutchinson, was curated by Russell LaMontagne & Richard Baiano.

Monica Raymond’s (Playwriting Finalist ’07, Poetry Finalist ’08) poem “The Miraculous” is part of the exhibit “Sinners, Saints, and Censorship: A Quills Art & Poetry Exhibition” at the Central Square YMCA (Durrell Hall), Cambridge, running through August 8th, 2010. The free art show will be up for 45 minutes before, and about 30 min. after, each performance of Bad Habit Productions‘ Quills (attendance of the play is not required to see the exhibit).

Sunanda Sahay (Traditional Arts Finalist ’10) has an exhibition of traditional Indian Madhubani paintings at the Multicultural Arts Center in Cambridge, running through September 6, 2010. 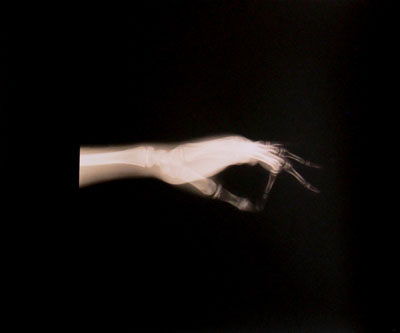 Jo Sandman (Sculpture/Installation Fellow ’84) will lead a talk and conversation on her work selected for inclusion in the exhibit Out of the Box: Photography Portfolios from the Permanent Collection of the DeCordova Sculpture Park and Museum in Lincoln. The exhibition, which runs through October 30, 2010 and was organized by independent curator Leslie K. Brown, is a fascinating selection of photographs from the DeCordova’s collection. Bring your cell phone for an audio tour of the exhibition by Leslie Brown and Gus Kayafas of Palm Press. Jo’s talk is on Saturday, August 7, at 3 PM.

Sarah Slifer (Choreography Fellow ’10) will perform a new duet with dancer Jimena Bermejo Black in an evening of pieces called Body of Eyes: a dance party/performance, at Club Oberon in Harvard Square, Cambridge. Sarah’s new duet, “5 light-years 3 seconds now,” looks into grand-unified theories and human perception. New scientific theories are postulating many spatial dimensions and sometimes two time dimensions; Sarah is attempting to find these dimensions and play around in there. The performance takes place on August 11th, at 8 PM.

Lewis Spratlan’s (Music Composition Fellow ’88) opera Life Is a Dream has its world premiere in July and August, at the Santa Fe Opera in New Mexico.

Leslie Williams (Poetry Fellow ’10) has won the 2010 Robert H. Winner Award from the Poetry Society of America, and her book, Success of the Seed Plants, won the 2010 Bellday Books Prize and will come out in October. Congratulations!

Helena Wurzel (Painting Finalist ’10) is in the group show Missive at the Russell Projects in Richmond, VA. The show runs through September 4th. 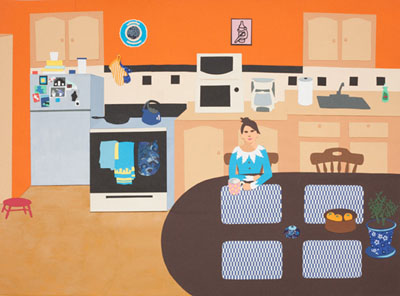