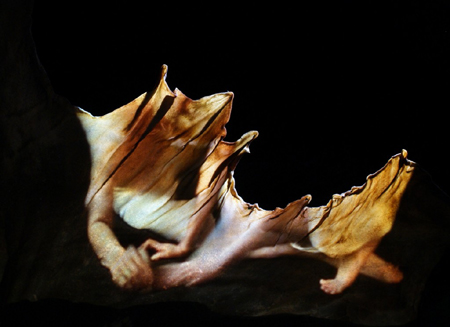 Rosalyn Driscoll, Alisia Waller, and Angela Zammarelli are among the artists participating in REACH Fest (4/13), with performances and exhibitions at venues throughout Holyoke, MA.

At Clark Gallery in Lincoln, Todd McKie, David Moore, Anne Neely, and Dawn Southworth are among the artists in Color Collision (thru 5/11, reception 4/13, 4-6 PM.

Ben Berman received a great, starred review from Publishers Weekly for his poetry collection Strange Borderlands, calling it “a must-have book for readers of poetry.” He’ll read from the collection at the Watertown Library (4/17, 7 PM).

Sarah Bliss‘ video You Leave Here is in the group show A Trapped in Your Mind Feeling, at Transmission Gallery and Aggregate Space Gallery in Oakland, CA (thru 5/18). The exhibition explores anxiety sources ranging from economic instability to environmental stewardship, from deteriorating health to identity crisis. Also, Sarah’s soundwork All the Flesh of His Body was featured in a presentation by Fulbright scholar Ciara Cosgrove on the Ulster & Fenian story cycles at the Irish Cultural Center at Elms College (on 3/31).

Edie Bresler is artist in residence at the Boston Center for the Arts this Spring has a photography exhibit, Exchange Economy, thru 6/15. On April 6, 2-5 PM, the artist will hold Exchange Economy Community Photo Day at the BCA. Attendees can “purchase” any as-yet unclaimed photographs by offering something of value in exchange, beginning at 4pm. Learn more.

Kelly Carmody will be exhibiting the Portraits in Little and some recent landscapes at the Art Student’s League’s booth at the Affordable Art Fair in NYC.

Andrea Sherrill Evans has a new series of drawings in the group exhibition Mean Girls at SPACE Gallery, Pittsburgh, PA (thru 4/28). The artist will have an artist talk (4/27, 1 PM) in conjunction with the show, which is curated by Jill Larson.

Vico Fabbris is exhibiting work at Gurari Collections in Boston (thru 4/30).

Barry Freedland exhibits his new project, Passive Engagement, in the Easthampton City Arts Gallery (4/6-4/29). Passive Engagement is an interactive project that investigates boundaries of artistic ownership and creative process through a series of robotically generated drawings.

Scott Listfield‘s solo exhibition, Astronaut: Paintings by Scott Listfield, is at Albright Gallery in Concord (thru 5/26). He’ll also participate in Wider Than a Postcard (a group exhibition curated by Sven Davis) at Breeze Block Gallery in Portland, OR (5/2-6/1).

The Draft, a new multi-media documentary play by Peter Snoad, will receive its first staged reading at the Hallie Flanagan Studio Theatre at Smith College in Northampton (5/2, 7:30 PM), directed by Daniel Kramer. The Draft brings alive the voices and stories of 10 people who made life-changing choices in relation to the military draft and the Vietnam War. Their experiences range from combat in Vietnam, to resisting the draft and going to jail; from choosing self-exile in Canada to treating wounded GIs as an intensive care nurse in Vietnam.

Invisible Stories by Sarah Slifer Swift and Kate Tarlow Morgan, a new piece for dance, books, and words, will premiere at the Massachusetts Poetry Festival (5/3, 3:45 PM).

Jonathan Weinert‘s chapbook Thirteen Small Apostrophes has just been published by Back Pages Books of Waltham, MA. Until Everything Is Continuous Again: American Poets on the Recent Work of W. S. Merwin, which Jonathan co-edited with Kevin Prufer last year, has been named a finalist for the ForeWord Book of the Year Award in the Essays category.

Congratulations to Marguerite White, who is among the artists selected for the 2013 Portland Museum of Art Biennial.

Rodney Wittwer reads from his poetry collection Gone & Gone at the Randall Library in Stow (4/18, 7 PM).

Maxine Yalovitz-Blankenship‘s painting The Juggler, oil on canvas 48 x 36 inches, has been acquired by the Boston Museum of Fine Arts, in addition to two of her drawings, already acquired.

Image: Still image from the installation THE POETICS OF SKIN, a collaboration between Sarah Bliss and Rosalyn Driscoll.