You are here: Home / professional development / Everybody wins: a roundup 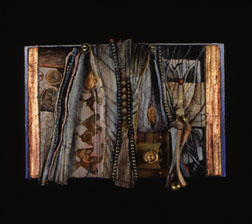 Boston Handmade, a group of Boston-area artists, artisans, and craftspeople who (totally apropos of their name) handmake their stuff, have been invited to open up shop in an empty storefront in Downtown Crossing! Well done, Boston Redevelopment Authority, well done indeed.

Magnum Photos blog has advice for emerging photographers, from like a stadium-full of established photographers. (Seriously, a ton of photographers offer advice – there’s gotta be something useful in there somewhere, right?)

Not sure how I feel about the cutting up of books (even so artfully), but this site featuring book sculptures is pretty cool. Makes me think of Sherrill Hunnibell’s (Drawing Fellow ’04) altered books (such as the one above) and Mag Harries’ (Sculpture/Installation Fellow ’03) book chairs.

On his blog The Writing Life x3, Massachusetts playwright and writer Patrick Gabridge shares impressions of a recent theater symposium in Boston. “I was struck over and over again how much we all want to work together better,” he writes, positing that a theater scene could greatly benefit from more reflection on just-concluded projects, learning from the successes and mistakes of the collaborative process.

Mirror Up to Nature has a perceptive post on how the current economic climate could (let’s choose to emphasize the word could) be a rife environment for attacks on government arts funding.

The LA Times book blog Jacket Copy covers Concord, Mass. author-turned-philanthropic-publisher Stona Fitch and his decision to give away his book Give and Take with the caveat that the receiver then gives to charity (and in a whole ‘nother layer of meta, the plot of the book involves a modern Robin Hood type).

An interesting craft question posed at Practicing Writing: in historical fiction, should the words be spelled as we spell them now, or should the spelling reflect the period?

In The Art Newspaper, Roland Augustine has an opinion piece stating that artists should be able to deduct a fair market value in their taxes when they donate works of art. Currently, art collectors can, but artists can only deduct cost of materials. (Incidentally, this very change is part of President-elect Barack Obama’s arts policy, so there is reason to hope.)

Speaking of… Best American Poetry is sponsoring a contest for the best Inaugural ode.

And finally, GalleyCat covers last night’s National Book Awards ceremony. Sadly, neither Salvatore Scibona (Fiction/Creative Nonfiction Fellow ’06) nor Joan Wickersham (Fiction/Creative Nonfiction Fellow ’08), finalists both, walked away with shiny new awards (I’m assuming they’re shiny), but the blog quotes Salvatore’s publisher at Greywolf, Fiona McRae, as being sure that Salvatore will have many more award nights ahead of him. I still wish he and Joan had won, but, as David Mehegan says in the Globe’s Off the Shelf blog, “You’re all champs in our book.”

Incidentally, check out this video interview with Salvatore on GalleyCat (Salvatore speaks about halfway in, after Candace Bushnell and the awards director). Asked how he as an artist, already to some extent resigned to a not-rich life, reacts to the Wall Street crisis, he says that when “everybody who’s rich suddenly gets poor, we feel like we’ve come up in the world!”

See, ask an artist, and everybody wins.