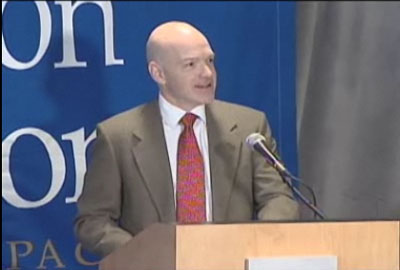 Just think: one year ago, President George W. Bush watched from the sidelines as Hillary Clinton battled Barack Obama for the presidential nomination in a dead heat. General Motors happily cranked out Hummers… Sarah Palin was unknown outside the frozen north… and the Dow Jones stood at 12,548. My how much can change in just one year.

– From Ben Cameron’s prepared remarks for Maybe It’s Not Just About the Money: Exploring the Real Crisis Facing the Arts, a forum at The Boston Foundation on March 24, 2009

The speech was about the difficult environment – the “ever accelerating, ever confounding, often perplexing change” – many in the arts currently face. Ben’s focus was primarily on arts groups and how they can best position themselves to succeed in these times of tumult. But I thought it might be interesting to look at some of his key points and how they could translate to the individual artist.

In the face of undercapitalization, increasing inadequacy of old fundraising models, and erosion/shifting tastes of audiences, Cameron offered these suggested goals for organizations: essentialize your work, expand investments in artists and programming, take risks, and embrace coopetition (“cooperating to grow the pie for us all, even as we continue to inevitably compete for a piece of it”).

For organizations, this means clarity of mission and absolute commitment to pursuing it. But what about for individual artists?

Here’s my take: given the dire economic realities, it might seem pragmatic to work “safer,” to be a bit more artistically conservative in your new work to increase its commercial viability.

Resist this idea. Don’t pull back in your art. Create the work that’s essential to your ideas, your vision, the issues you struggle with. To put it another way: don’t let the essence of the work get lost in a fog of economic fears.

2. Expand investments in artists and programming

If arts leaders like Ben Cameron and Michael Kaiser (whom Cameron was paraphrasing) are calling for arts groups to increase investments in artists, then the natural continuation is for artists to increase investment in themselves, and their work. Not a financial investment, necessarily, but one of energy, determination to sharpen our purpose and a readiness to…

Back in January, we asked artists how the economy was affecting their art, and a couple of commenters noted that constraints on their commercial prospects had, ironically, freed them up to experiment and take creative risks. Well, obviously taking artistic risks AND having booming commercial success, simultaneously, would be preferable. But taking a longer view, it could be those risks and experiments will lead to more rewards (however defined) further on down the road, as they lead to new innovations, new breakthroughs, new opportunities.

Artists interested in helping waters rise for the whole creative community can take opportunities to participate in arts advocacy, such as the annual Artists Under the Dome event at the Massachusetts State House.

But beyond advocacy, artists might consider an anecdote Cameron told about a team-building exercise he learned while in the corporate sector. Groups of two were told to study one another, then turn their backs and change five things about their appearance. After the partners guessed what five changes had been made, they were asked to turn and make ten changes, then twenty. After the group complained that the acceleration (5, 10, 20) was too swift, they were reminded that, had they thought to collaborate with others in the room to change their appearances rather than working alone, had they traded ties and shoes and scarves and glasses, etc, “we could have done 20, 40, 80 (changes), we could have gone on for hours,” Cameron said. But they hadn’t thought to work collaboratively on the solution.

With decreased opportunities for funding and commercial prospects, artists could understandably view one another as competitors for what support and opportunities are still available. But perhaps it’s time to look at other artists as collaborators in the sector (and even literal collaborators on projects), fellow members of a creative community to approach, whenever possible, with generosity, and a spirit of camaraderie. An artist asks for feedback or a favor? Offer it. You see an opportunity for collaboration? Take it. Find ways to build your networks and make your connections – and it doesn’t necessarily have to be the ordinary ways, like conferences and networking websites, although those are good, too. Just connect where and when you can.

Because who knows where we’ll be in another year? Wherever it is – and it’s bound to be a galaxy far, far away – we’ll be better placed as a sector if we’ve fostered a community of fellow creative, engaged, accelerating minds.

All quotes are taken from Ben Cameron’s prepared remarks for Maybe It’s Not Just About the Money: Exploring the Real Crisis Facing the Arts, a forum at The Boston Foundation on March 24, 2009.