You are here: Home / funding / Doorways 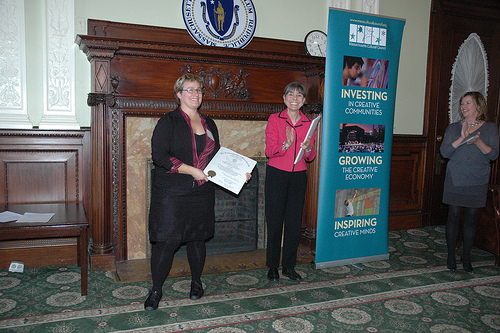 In November, we held a celebratory breakfast at the Massachusetts State House for the 2010 awardees from our Artist Fellowships Program. It was a chance for state-recognized artists to meet one another as well as some of the legislators who keep programs like this going through their support of the MCC. Will it surprise anyone to hear it was – always is – a blast to visit with a group of exceptional artists from a wide range of disciplines? The poets sipped coffee with the choreographers, the painters buttered croissants with the folk artists; a good, art-loving time was had by all.

One attendee, Rachel Mello, whose intriguing hand-cut silhouette paintings garnered her a Finalist award in Painting, made a point of sharing with us the impact of her $500 award. Along with the validation of receiving a monetary award as an artist, she said the grant had a very practical value:

My work involves a lot of wood-cutting. I cut hardboard panels into complex silhouettes which I print and then paint. The hardboard is a resin-impregnated panel, which means when it’s cut the saw dust, which is an ultra-fine powder, contains unknown chemicals and compounds some of which have been changed by the heat of the saw blades into yet other unknown chemicals and compounds. I wore a respirator when working, which became uncomfortable after about an hour or two of work, and I went home at the end of the day with a headache and smelling of burning glue.

With my $500 grant I was able to purchase a Delta 50-760 dust collector with a 1-micron filter bag. This is, essentially, an extremely powerful vacuum-cleaner (it sucked in my work goggles when I took them off before shutting down the machine once). I can turn it on next to where I’m working, and no longer need to wear a respirator, and never carry potentially carcinogenic dusts home on my clothing and in my hair, nor do I now distribute a fine layer of dust all over my studio. I work longer and more efficiently and spend less time at clean up. And I’m far less likely to contract pulmonary diseases. All because of a $400 dust-collector and about $50 worth of hoses and accessories, which I purchased with my MCC Finalist award.

We know, of course, that funding exceptional artists, whether the $7500 fellowships or the $500 finalist awards, is worthwhile – heck, we think it’s flat-out spiffy, and it’s an honor for us to get to do it. But hearing Rachel’s story was really gratifying. It brings to mind the way awards like these can lead to other opportunities in an artists career, often in a non-linear way. 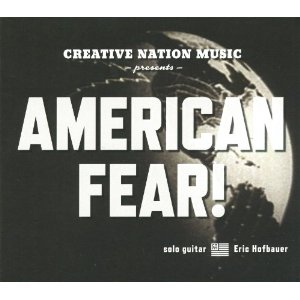 We heard from Eric Hofbauer recently; he won a Music Composition fellowship in 2009. Eric told us that in January 2010, at a recording session for a new project called Level with his quartet The Infrared Band, he discovered some of the musicians were not quite ready for the material. What’s more, he realized that some of the songs needed adjustment. Knowing he had some of his grant still in savings, he left the session without any recorded material and scheduled a future one. Had he not had the cushion the award had given him, he said he’d probably have had to make do with recorded material that wasn’t at the highest level – something he was determined to avoid.

To me, it’s the notion of working toward the highest level that really makes unrestricted funding for artists valuable. We recognize that a grant of $500 or even $7500 isn’t going to enable, say, a year in the salons of Paris. But perhaps it opens a door to that next level of new art-making, be it a new industrial dust collector, a higher quality performance, or whatever it is you as an artist need to get a little closer to your greatest work.

By the way, you can apply now for our Artist Fellowships in Crafts, Photography, or Film & Video. Deadline: January 24, 2011.