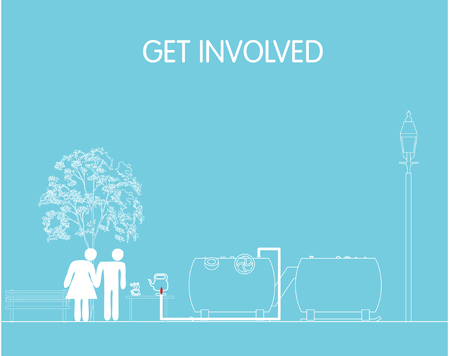 ArtSake’s extreme fondness for all things canine has lead us to share with you a most wonderful public art project created in partnership with the Cambridge Arts Council. Tired of looking for a trash barrel to deposit the daily waste created by Fido or Poochie? It is a waste of waste. So Matthew Mazzotta has created the Park Spark Project, a public methane digester in Pacific Street Park that uses dog waste and turns it into energy. It is the first dog park methane digester installed in the U.S. (yeah Cambridge)! We caught up with Matthew to have him to tell us more.

What inspired you to create this project?
“Actually, I was walking down the street and I saw my friend Clay, who I don’t see that often, walking his dog. He said he was going to the dog park so I went with him to catch up with how he was doing. I had recently gone to India, with MIT’s D-lab program to study appropriate technologies. Having been interested in methane digesters for years, I was able to see them being used firsthand in India. There, women collect the cow dung with their hands and mix it up with water and then dump it into their digesters. Somewhat similar to what people do at dog parks, but the women in India don’t wear bags on their hands.

Sitting at Pacific Street Dog Park watching the dogs, I saw an almost overflowing garbage can full of dog waste and said to Clay ‘In other countries, people use that for fuel to cook with, that can is just a pile of energy.’

Even though we don’t see many small-scale digesters in the US, we are starting to see them on farms. As the issues around climate change are becoming more debated, methane is now being seen to be 30-70 times more potent as a green house gas than Carbon Dioxide. That means animal farms are being targeted as environmental polluters.

The Park Spark project is making visible how we as the city handle the waste from the animals of our communities and what the potential can be. Although, in India, the methane collected goes to a stove to cook with, I started imagining what a community of a city would use their energy for.” 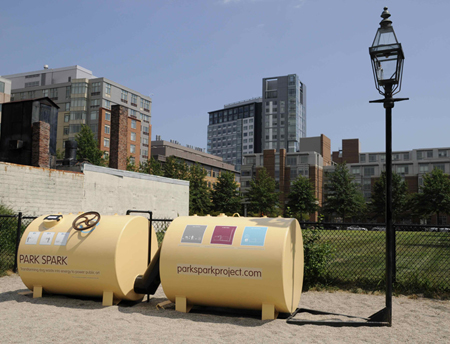 What has been the most surprising thing to result from this project?
“Although, I wrote a grant to MIT to fund the project, I have been in conversation with the city about doing this for almost a year. There have been many discussions about this project, sometimes hopeful and sometimes not so much. The most surprising aspect, and the one I find amazing, is that I was able to work with the city and realize something so new and experimental. With many different parts of the city giving advice, I think the project was actually improved from what I had initially proposed. It was inspiring to see that someone can work with the city and achieve great results.”

What do you imagine dogs think about this?
“Well, I think that every dog that has entered the park has blessed the project (by peeing on it), so even if they don’t understand the implications of the Park Spark, it is nice to see that they are more than willing to live with it.”