You are here: Home / film/video / DocYard with Ross McElwee and Michael Negroponte 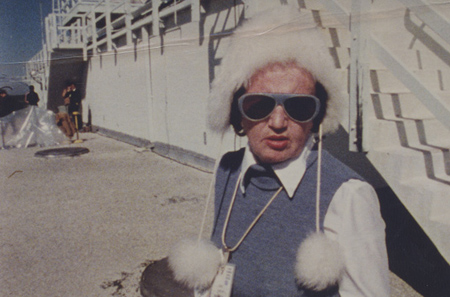 The DocYard is a film and discussion series running at the Brattle Theatre every other Monday January 23-April 16. The series is an integral part of the LEF Foundation‘s mission to highlight and foster New England as a center for documentary film. The series screens diverse, pivotal documentary films and hosts the filmmakers to discuss the work with the local community.

It also hosts some of the most fascinating filmmakers at work today – some of them past awardees from our Artist Fellowships Program. This Monday, January 23, 8 PM, Ross McElwee (Film & Video Fellow ’05), will be on hand for the screening of his 1979 film Space Coast, along with his collaborator on that film, Michael Negroponte. (The two were fellow students at MIT.)

The film explores the community of Cape Canaveral, Florida, after the phasing out of the Apollo moon missions. It’s an early film for McElwee, done cinema verite style, before his work turned toward the more personal, autobiographical style of films like Bright Leaves (for which he won the MCC grant).

By the way, you can get a season pass for the DocYard, plus support its ongoing work, by pledging a donation through its Kickstarter campaign.