Dance artist James Morrow (Choreography Fellow ’14) has launched a crowdfunding campaign for his upcoming event Sweaty Epiphany, October 23-24, 2015 at the Dance Complex in Cambridge. The event, Morrow’s Boston-area introduction, explores performance and ability, patriarchal culture, and the convergence of public and private reality, and will include work by Morrow as well as collaborating artists.

We asked the choreographer about his art, the impact of his MCC grant, and how dance threw him a curve ball. 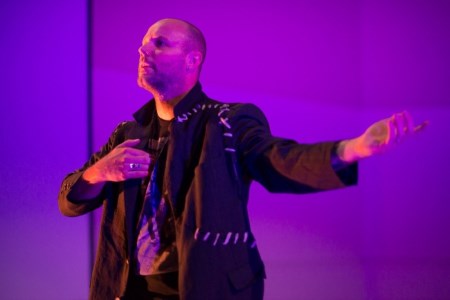 What are the origins of your upcoming performance, Sweaty Epiphany?
Sweaty Epiphany was the title of one of the first shows I ever premiered in Chicago over ten years ago with my company of that time “instruments of movement.” I believe the name comes from a Bill T. Jones interview. If I remember right, I was at the American Dance Festival in 1999 and sitting in on a lecture with Bill T. Jones and Gerald Myers. Myers asked, “What is dance?” Jones responded, “A sweaty epiphany.” I agreed and thought years later that it was a great title for a show, being that I literally am a sweaty mess by the end of any work I perform and each performance allows for many little and big epiphanies for myself and the audience. (More about the project)

Do you remember where you were and what you were doing when you got the news about your MCC award?
I had just finished teaching a class at Pioneer Valley Performing Arts where I was on faculty at the time. Jen Polins called me and told me that she had just received word that she was a fellow and also just spoke to Paul Matteson who confirmed he too was a recipient. The three of us worked very closely together for over a year creating a trio for Paul to be performed all over the US (see a sample). Jen was praying that with me receiving the award, we would have a full trifecta and she was right. The three of us went out and celebrated. I am very thankful to Jen Polins. She really took me (and Paul) under her wing and introduced us to the dance community of Western Mass. She is an amazing friend and generous individual. She was also the person who informed me of this Fellowship and encouraged me to apply. Without her initial help I would still be floundering through Massachusetts.

What did you use the money for?
Most of the money was used to travel to festivals and performance opportunities. I know I could have used it to pay off credit card bills, but where’s the fun in that?

Share a surprise twist in the James Morrow story.
I guess a surprise twist would be that I actually became a dancer. I was at a university on a baseball scholarship and ended up dropping it my junior year and taking a dance talent waiver. My freshman year, I was introduced to concert dance in a musical theater dance class. I noticed that I was shaving time off my throws to second base. I was a catcher and I also realized that my defensive skills like blocking wild pitches were effortless. I continued taking dance classes for another two years until it became my priority and baseball became the hobby. It wasn’t you baseball, it was me.

Sweaty Epiphany takes place Friday, October 23 and Saturday, October 24, 2015, at the Dance Complex in Cambridge. The project is currently crowdfunding on GoFundMe.