Cristi Rinklin (Drawing Fellow ’10) is creating a mesmerizing installation for the Currier Museum of Art in NH, a transparent frieze mounted on floor-to-ceiling windows with walls of accompanying imagery. Here, she discusses the installation (called “Diluvial”), her campaign on USA Projects to support the exhibition, and her work and life as an artist with a flood of creative vitality. 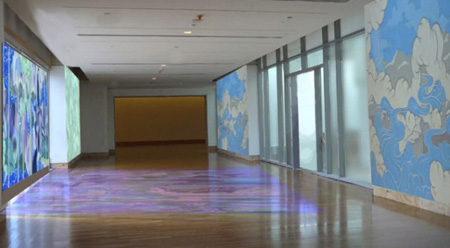 ArtSake: Fascinating project. Did the concept of a transparent, frieze installation strike you all at once? Did it develop in steps as you continued exploring new media for your work?

Cristi: It’s kind of a long story, but I’ll try to sum it up as succinctly as possible. The first time I created a project similar to this was in 2005, when I was invited by Amy Schlegel from the Tufts University Art Gallery to create an installation for their sculpture court. Amy was familiar with my works on mylar that combined painting and digital prints onto translucent film, and she had seen a small, experimental project that I had done for “Boston Art Windows” in which I installed translucent digital prints into a storefront window that was illuminated from the inside, creating a lightbox effect. Based on that, she invited me to conceive of an immersive installation that would activate the walls and windows of the Remis Sculpture Court at Tufts, and Nuvolomondo is what came out of all that. I’ve always considered this one of my most ambitious projects that I’ve undertaken. As luck would have it, Nina Bozicnik, who is currently the Assistant Curator of Contemporary Art at the Currier Museum in Manchester, New Hampshire had seen Nuvolomondo while it was at Tufts, and it really resonated with her. When she got the position at the Currier, she invited me to create a similar project for their space.

ArtSake: Why did you choose to use USA Projects as a way to raise funds for your Currier Museum of Art exhibition?

Cristi: I had never heard of USA Projects until the Mass Cultural Council brought it to my attention back in the Fall. In fact, before then, I had never even heard of crowdfunding! All of the MCC Fellows were invited to submit projects to USA Projects, and it just so happened that I was in the midst of developing Diluvial for the Currier, so I decided to give it a shot.

ArtSake: The title Diluvial references deluge geography but could also apply to the flood of visual experiences the work conjures. Did the “flood” theme steer the painting? Or was it a theme you discovered after the fact, naturally occurring in your painting, as it were?

Cristi: It all developed very organically. For some time, I had been working with abstract imagery based on the landscape that depicted forces of creation and destruction. I’m very fascinated (and frightened) by the chaotic and unpredictable power of nature, and over the past few years, the world’s population has experienced its catastrophic force on a dramatic scale. These ideas were present in my work over the past several years, and when I began developing imagery for Diluvial, I was looking a lot at the Hudson River School painters, and their attitude towards the American Landscape as this kind of sublime, grandiose, epic theater that was infused with spiritual significance. In my research, I found that several of these artists, such as Thomas Cole, and Asher Durand, believed that much of the Northeastern landscape was forged by the Great Flood. The term Diluvial, refers to this, but it has also come to refer to geological formations that were created by glacial shift. It was very serendipitous, because I had already begun developing the imagery for the central window frieze, and it depicted a lot of gushing waves and waterfalls, so when I discovered this information through my research, it all fell into place. 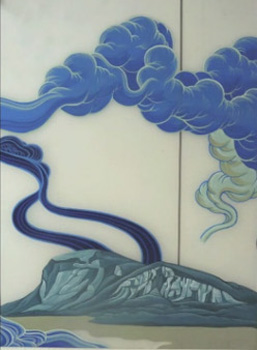 ArtSake: Speaking of titles, yours are always interesting – “Fumarole,” “Fierce Descent,” “Bound for Glory.” Is titling your work something you enjoy doing? Something that comes easy? Or do you labor over the titles?

Cristi: I labor over titles, and they never come easy. When I look back over them, I feel like some of them work well, and others I cringe over, but nonetheless, I feel like titles are important. The titles that you mention above come from some of the writings on the nineteenth century American naturalists and painters. They’re terms that give the landscape a dramatic sense of destiny and purpose, which resonates with me.

ArtSake: You’re married to another artist (Andrew Mowbray). What does it mean to be part of a family of artists?

Cristi: I think creative people are often drawn to each other, and being married to an artist seems quite natural to me. I have a lot of friends and colleagues who are also creative couples, so I think there’s definitely something to this kind of attraction. It luckily means we can share a lot of similar experiences and support each other in both our values and ideologies, as well as our practice. We have a young child now too, which has really changed our lives in unexpected, yet extraordinary ways.

ArtSake: What do you try to instill in the emerging artists you teach at the College of the Holy Cross?

Cristi: Work hard, don’t be afraid to take risks, be resourceful, and find your community. These will be the people who will inspire you and keep you going! 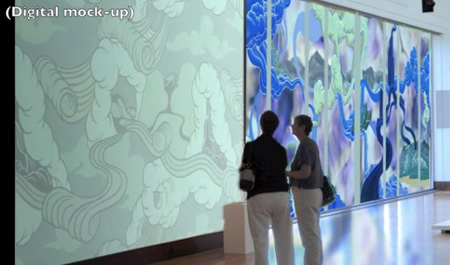 Cristi Rinklin’s USA Projects campaign for DILUVIAL will be active through April 27, 2012. DILUVIAL is at the Currier Museum of Art June 9-September 9, 2012.

Images: all images courtesy of Cristi Rinklin, who is represented by Steven Zevitas Gallery.