You are here: Home / arts business / Congratulations, MA: a round-up 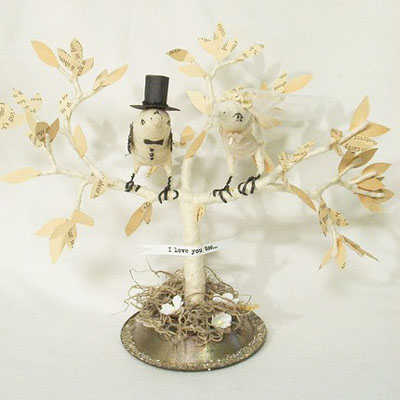 Around the Webs
A Very Martha Engagement: when Crystal Hanehan, a Boston-area artist specializing in handmade, vintage-inspired, spun cotton creations through her business Vintage by Crystal, appeared on The Martha Stewart Show, it was already shaping up to be a propitious day. Then she was proposed to by her boyfriend. On air. (I’ve heard of using Martha designs for your special occasions, but adorning the moment with the actual Martha – now that’s good style.)

From the Boston Globe: a local architectural firm wants to transform an abandoned T tunnel into a subterreanean art space. The proposal, called TUTS (Tremont Underground Theater Space) won the ShiftBoston Ideas Competition 2009 for “provocative wild visions for the City of Boston.” The proposed space would be multi-use, and best of all, wouldn’t be overrun with vicious Morlocks for another 800,000 years!

The Art21 blog talks to Laura Thompson at Kidspace, which has incorporated the work of dozens of individual artists during its 10 years providing young museum goers with creative awesomeness at MASS MoCA in North Adams.

A new online publication, Defunct Magazine, collects essays about things that have gone – or are going – bye bye. AGNI editor Sven Birkerts contributes musings on the rake – “not yet a relic, but a technology on the verge.”

Congratulations, Massachusetts
Bravo to Paul Harding of Georgetown, Mass., whose novel Tinkers won a 2010 Pulitzer Prize for Fiction. His debut novel, no less. The New York Times Paper Cut blog calls the novel “one that got away” – as in went under the paper’s radar when it came out, but one will no doubt get its due now.

The Berkshire Taconic ART Fund has announced over $150,000-worth of smiles/grants to New England artists and arts organizations.

I need a hero. Had Bonnie Tyler meant, in her classic 1980s ballad “Holding Out for a Hero,” a hero of the theater, in the Boston area, the next line could’ve been, “More specifically, Michael Maso, Managing Director of the Huntington Theatre Company, who was just named Theatre Hero by the theatre service organization StageSource!” (Would’ve changed the nature of the song a bit, but still.)

Congratulations to writer Brendan Mathews of Great Barrington, whose short story “My Last Attempt to Explain to You What Happened with the Lion Tamer” was selected by Richard Russo for inclusion in Best American Short Stories 2010. Brendan has been published all over the place, including Glimmer Train, Virginia Quarterly Review, and The Southwest Review, and teaches at Bard College at Simon’s Rock. (Incidentally, does anyone know about other Massachusetts writers who have been selected for the upcoming Best American collection? Leave a comment and spread the love!)

Getting Strong Now
On New England Film, the Screenplay Doctor answers some screenwriters’ questions, mostly about agents: the need for, and the locating of, the writing to.

Interested in finding an agent/publisher for your novel? Boston-area writer Dell Smith gets down to the basics of that most basic effort of the would-be published author: the Query Letter.