You are here: Home / music / Composing crusades for the extraordinary 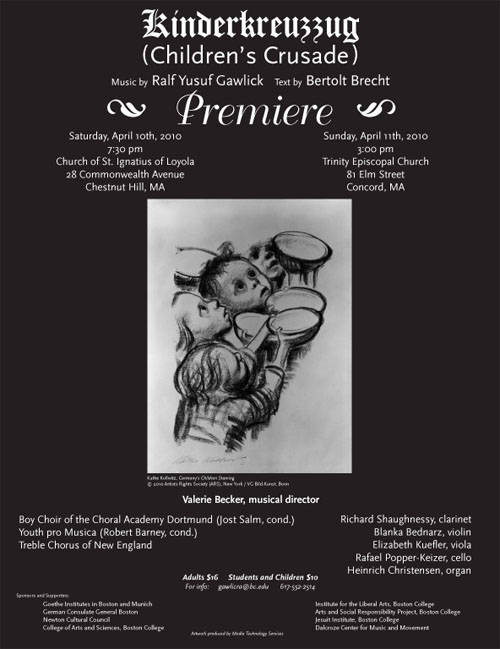 Ralf Yusuf Gawlick (Music Composition Fellow ’09) was born in Germany, of Turkish-Kurdish descent. He’s lived and worked in the United States and Europe, and through his wife, has become particularly connected to Poland (his “adopted country”).

With that breadth of personal experience, perhaps it should come as no surprise that his musical compositions seem to move with the sweep of many histories. His compositions are deep engagements of the conscience and mind, drawing on the poetry of Pope John Paul II, the tumult of the Berlin Wall, or the plight of Polish orphans on a children’s crusade.

Berlin Suite and a new CD
I had the pleasure of meeting Ralf this past November, at a Massachusetts State House event to celebrate the 2009 Artist Fellows and Finalists. Gracious and deeply invested in his work, he shared how he’d been commissioned by Boston College and the German Embassy to write the music for the film Writing on the Wall: Remembering the Berlin Wall. The film has since screened at numerous venues, including the MFA Boston.

Ralf’s score will be performed as a concert suite by the Hawthorne String Quartet on Wednesday, March 17, at Gasson 100, Boston College, in Chestnut Hill. There’s a reception at 7 PM to celebrate Ralf’s new CD, Ralf Yusuf Gawlick: Solo and Chamber Works, from Musica Omnia. A free performance of the film score, called “Berlin Suite Opus 15,” is at 8 PM.

Kinderkreuzzug
Then next month (April 10 and 11), Ralf will premiere a large-scale work for children’s voices and  a small chamber ensemble, called the Kinderkreuzzug Cantata. Its text is the anti-war poetry of Bertolt Brecht, written after the playwright’s 1933 escape from Nazi Germany. The story follows 50 orphaned children who embark on an extraordinary crusade: they leave war-torn Poland in hopes of finding a land of peace.

The scale of the project’s vision is matched in performance: two New England children’s choirs will be joined by a choir from Germany, sponsored to visit New England specifically for this piece. They will perform the cantata twice, publicly, as well as offer a separate program of their own (see information below), then record the cantata for a future Musica Omnia release.

In a statement about the cantata, Ralf writes, “Brecht’s children still walk and suffer in our collective conscience. Although my music may not give bread, it may just harbor their hope, and ours, for the extraordinary.”