You are here: Home / call to artists / Commonwealth Awards: nominate/create 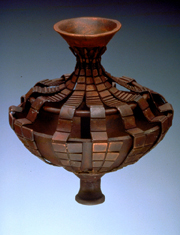 We’ve begun the 2009 Commonwealth Awards process, and there are two things for which we humbly ask: nominations for 2009 recipients and proposals to create the art object given to award winners (such as the above image, the 2005 Commonwealth Award Art Object, designed by Deb Todd Wheeler).

But if you find yourself asking, What are these Commonwealth Awards you speak of? then read the next sentence: They are the state’s highest honor in the arts, humanities, and sciences, presented every two years to individuals and organizations that have made extraordinary contributions to the cultural life of Massachusetts. Such cultural luminaries as Yo-Yo Ma, David McCullough, Stanely Kunitz, Robert Brustein, Stephen Jay Gould, and Doris Kearns Goodwin have received them since their inception in 1993. The awards are sponsored by Bank of America.

Nominations are now being accepted for outstanding individuals and organizations in the categories of: Creative Economy Catalyst, Leadership, Creative Community, Individual Achievement, Creative Learning, and Cultural Philanthropy (read more about the category descriptions and past winners). The nomination form has been simplified and streamlined this year, so you should be able to ace the Monday, December 8, 2008 deadline for nominations.

We’re also announcing an open call for proposals to create the 2009 Commonwealth Award Art Object. The MCC will commission an artist to create nine art objects; eight for the award winners and one distinctive piece to be presented to the Keynote Speaker at the awards ceremony.

There’s no time to lose, as the deadline for proposals is Monday, December 8, 2008. All nine art award objects will need to be completed and delivered by January 9, 2009. The total budget may not exceed $5,850 (approximately $650 per object).