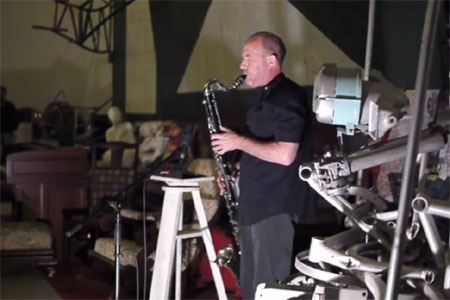 Christine Southworth and Evan Ziporyn, two composers working in an array of traditions and media, have launched a crowdfunding campaign for their latest project, In My Mind and In My Car. Using the Hatchfund platform (formerly called United States Artists Projects), the artists are raising funds to expand a 45-minute piece for bass clarinet and electronics to a longer performance incorporating video and new music.

We asked the artists about their project, its crowdfunding campaign, and the topography of their lives as artists. 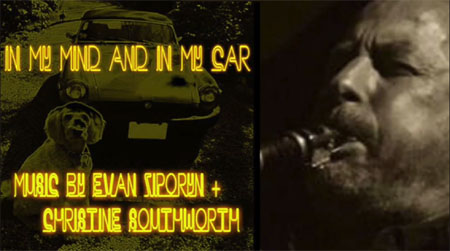 Why In My Mind and In My Car (the title)? Why In My Mind and In My Car (the project)?
Christine: The title is actually from my side of the project – we started working on this last year, as two separate pieces. I was making some electronic music for video, actually the whole project began when we were in residence on a Mangrove in Panama, with no wifi and barely electricity (just 2 solar panels), and I wrote Underwater to accompany video that I filmed in the surrounding reef. I didn’t really have goals with it beyond making music to accompany videos. Then, while I was working on more of these, Evan was simultaneously working on pieces using old field recordings from Africa, as backing tracks for cellist Mariel Roberts. Somehow we overheard what each other was working on (our offices are in different parts of our house) and we thought, hey, these go kind of well together! And we decided to make it into a single project, with Evan playing over with his bass clarinet.

Evan: As soon as we put them together it was hard to imagine it was ever any other way.

Christine: The title – I wanted to write one for Evan, before the project idea actually came together. I actually wrote two for him, one was called Morse Norse Love Song which is just electronic – it takes ancient Norse poetry, translated into Morse Code and performed on synths; and the other was In My Mind and In My Car, inspired of course by the Buggles tune Video Killed The Radio Star, but aptly named because Evan IS quite often in my mind and in my car! 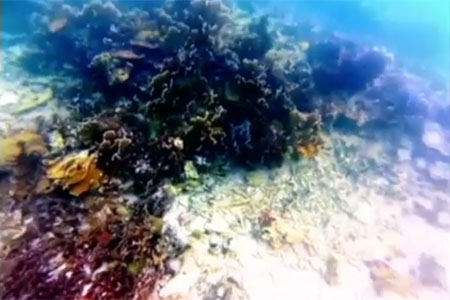 You’ve described the multi-media project as a “musical topography.” Can you talk about the journey on which you hope to take the audience?
Evan: The pre-recorded electronics for this piece are actually a bit of a jungle, thick with lots of layers, different types of musical life forms that intermingle and in themselves suggests a number of possible pathways. Part of this is the material itself, which ranges from very old, scratchy recordings from Bali and Africa, to nature sounds, all the way to synthetic sounds generated in our studios. But it’s also the way they’re put together – in fact one of the things that attracted me to Christine’s tracks was that I could navigate very different routes through them, that the music was somehow both fixed and malleable. I could take the music very different places depending on the circumstance. I then started taking this approach to my own tracks, gradually letting go of the written material (which incidentally Mariel Roberts performs beautifully on cello) and just responding to the moment. So the recorded versions are just one possible interpretation, ones we felt would stand up best over repeated listening and would go well in the set as a whole. My role is to guide the listener through the piece, and since I know the territory I can choose which things to highlight, which detours to take, etc.

Why are you choosing to crowdfund the project?
Christine: Fundraising has become really really difficult. There used to be a huge variety of grants to which we could apply, and now it seems like there are only a few, and simultaneously they’ve become much more competitive (because there are fewer total…), more unpredictable, just less reliable. This first part of the project we just did, for no money – it’s a labor of love! And quite honestly neither of us are happy if we’re not writing music! But we need equipment to make this performance work, and money of course always makes it easier to make time to set aside to compose – otherwise I need to prioritize the income-generating parts of my work (i.e., making websites for other people, etc.). We’ve never done this before, but we decided to give it a try. It’s strange, you first have to get over the weirdness of asking friends for money, but our friends love our music and they seem to want to help! So that’s great!

What artist do you most admire but work nothing like?
Evan: For me it’s the great minimalists, in visual art as well as music. Mondrian, Steve Reich, Rothko – I appreciate the ability to distill, to have confidence in form in that way. Mondrian in particular is hugely important to me because his trajectory was always toward more simplicity – if you look at his early paintings it’s almost like the later paintings are already in them, waiting for the window dressing to be removed. But my own work is never that pure.

What’s the best/worst day job you’ve ever had?
Christine: Best day job – working at the Wine Bottega in the North End.

Evan: I’ve blocked out all the bad ones – the best ones were at record stores (back when there were record stores), that’s where I discovered most of the important music in my life – Balinese gamelan, Anthony Braxton, and Earth Wind & Fire, to name three. The weirdest (albeit one of the shortest) was definitely demonstrating video games at an electronics convention in 1982.

Share a surprise twist in the Evan Ziporyn/Christine Southworth story.
Evan: We like to drive to Walden Pond in our 1979 MGB every day over the summer, swim across and back, and go home. It makes us feel like we’re on vacation a long time ago, for a little while.

Like, what does your work MEAN?
Christine: It means an escape, a story, a labyrinth of sonic landscape and journey through magic and nature and time. That’s what I hope my audiences get from my music.

Do you secretly dream of being a) a pop icon, b) an algebra teacher, and/or c) a crime-solver/writer a la Jessica Fletcher?
Evan: A pop algebra teacher who solves crimes through math, definitely.

In a paint ball battle between artists of all disciplines, who wins?
Christine: Jackson Pollock, of course.

Were President Obama to create a cabinet post in the arts, whom should he appoint as Secretary?
Christine: Glenn Branca

How do you know when your work is done?
Christine: Gotta go with Auden on this one, “poems are not finished, just abandoned in desperation.” Sometimes that’s the case, and sometimes it’s the opposite, you think there’s more to do, and then you realize it’s done!

Do you live with any animals?
Christine: So many animals! We have 3 grey cats, a beautiful Goldendoodle dog named Gigi (who is also in our minds and in our cars), 2 seahorses, 2 clownfish, 3 cardinal fish, a lobster, and many other fish, crabs and snails. I also volunteer with the Billerica Cat Care Coalition. My dream pets are a Savannah Cat and an octopus. My unreasonable dream pet is a Cheetah. But do you know about Cheetohs?

What films have influenced you as an artist?
Christine: The Life Aquatic with Steve Zissou.
Evan: Topsy Turvy, Casino, and Ed Wood.

What are you currently reading?
Christine: The Beak of the Finch
Evan: The Book of Job

Have you ever revised your work on the spot, during a performance (intentionally, I mean)?
Evan: See above – I’ve always been an improvisor, and am continually trying to find ways to loosen the boundaries between composed and improvised material. This is getting increasingly important to me, in this and in other projects, in my trio Eviyan, in Gamelan Galak Tika, etc.

How many revisions does your work typically go through?
Evan: It’s just a continuum of chaos until it’s done, to be honest…

In My Mind and In My Car, the Hatchfund crowdfunding campaign by Christine Southworth and Evan Ziporyn, is running until May 15, 2014.

Image: all images courtesy of the artists.