Christian McEwen (Dramatic Writing Fellow ’11) conducted interviews with a series of extraordinary poets visiting the Poetry Center at Smith College – Rita Dove, Maxine Kumin, and Yusef Komunyakaa, to name a few. Those interviews are compiled in the new book Sparks from the Anvil: The Smith College Poetry Interviews. We asked Christian about that book, her play about women’s relationships to money, Legal Tender, and the unifying spirit of collaboration and lyricism in her many-varied projects. 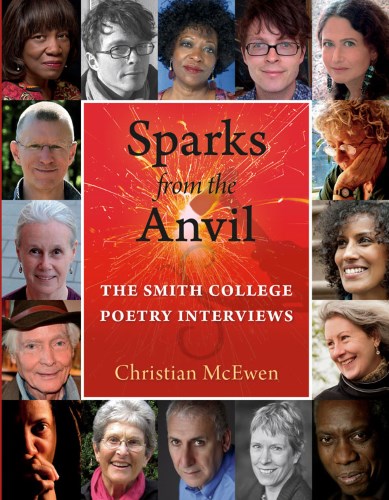 ArtSake: Your book Sparks from the Anvil compiles interviews you’ve done with poets at the Smith College Poetry Center. Many of your projects involve collaboration or engagement with other artists. What part does that engagement play in your own creative process? 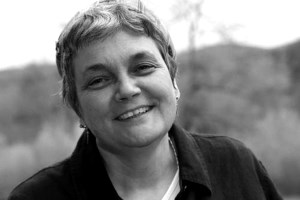 Christian: I was born in London, and grew up in Scotland. If I had stayed in the British Isles, I might well have written poetry and fiction. But I moved to the USA in my early twenties (I was given a Fulbright Scholarship to Berkeley, CA), and that required me to find a way to ground my work beyond the ease and fluency of my natal language. English-English may look the same as American-English, but it really isn’t. It has a different flavor (flavour!), a different sensibility. One of the ways I dealt with this was by writing non-fiction and becoming a kind of literary anthropologist. I did my first interviews for the Village Voice back in the nineties. (I particularly remember a long, delicious conversation with the poet, Olga Broumas.) Since then I have conducted more than 100 more, for my non-fiction book, World Enough & Time, my play, Legal Tender, and now this most recent project, Sparks from the Anvil. All these projects have helped me to “root” in what remains for me, to some extent, “a new found land.”

ArtSake: One of your interviewees from Sparks from the Anvil was past MCC Fellow Patrick Donnelly. Did any portion of your conversation with him particularly strike you as an interviewer and fellow poet?

Christian: I especially love the section that follows.

CM: There’s a thread of melancholy in your work, a deep consciousness of your own mortality, and the mortality indeed of an entire generation. Reading your work, I felt almost as if you had been schooled by death, by loss, by illness to a point where death was somehow the truest of all life experiences, some kind of apprenticeship almost. There are lines in one of your books where you’re talking to a dead lover, “Thank you for the hollow/you left in this pillow./I practice/ putting my bones here.” And there’s a teacher or a friend who scolds you, “At fifty-one you are too young to think of death so much.” I’m not sure what the question is, but I wondered if you could comment on my fumblings here, and say where they feel true to you, and what in fact death, mortality, has meant to you.

PD: I don’t think you’re fumbling at all, I think you’ve hit it on the head, it has been an apprenticeship, and this is the gift of HIV to me. I said before, “Every front has a back,” and the front of HIV is terrible, but there is a gift to every negative thing that happens. And in terms of the literary community, this morning someone wrote that he had longed for fame as long as he had longed to be a poet. Now I can imagine feeling that as a young person, but that’s not a way I would like to end my life. Those are not values that I aspire to. The knowledge of my own mortality, and watching so many people die, during the late eighties and early nineties, was a splash of cold water in my face, both about how I was acting and how I thought about myself, and what I thought the world was and what it is for. I still don’t know the answers to a lot of those questions, but I know that the time is short, and I’ve lived with that now for almost thirty years. Remember the Flannery O’Connor short story, A Hard Man is Good to Find…

CM: A Good Man is Hard to Find.

PD: [Laughs] A Good Man is Hard to Find. Hmmm. A Freudian slip. Where one of the characters says about the old woman, “She would have been a good woman if it had been somebody there to shoot her every minute of her life.” The Japanese poems that Stephen [Stephen D. Miller, PD’s spouse] and I are working on are Buddhist poems from eight hundred or a thousand years ago, and they are incredibly aware of impermanence and mortality. Everything is passing away from these speakers, it just slips through their hands, and this is the reality of the world we live in. And I am glad to be aware of it, absolutely it has infused my writing, this is what my writing is for. I’m not at all comfortable with this situation. I want to shake the bars about the way human life is designed. We come into the world in a very difficult way, causing pain to others, and we struggle, and then there’s only one way to get out of it, and the end of life is ugly whether it comes early or late, it’s painful, and there’s suffering and indignity… Both Stephen and I have had aging parents; now his whole family is gone. It is awesome, in the literal meaning of that word, to watch. And to me it’s really the only subject other than love. There’s a letter of Emily Dickinson’s, where she’s writing to someone about her nephew’s death from typhoid at a very young age, and apparently right before he died he asked for the door to be opened: “…who were waiting for him, all we possess we would give to know… though is there more? More than Love and Death? The tell me it’s [sic] name!” So this, to me, is the poet’s landscape. There are other subjects that are subordinate to these, and they are a lot of fun and even comedic and farcical and neurotic subjects, but it all boils down to a variation for me on those two.

ArtSake: In your book World Enough and Time (read an excerpt), you describe a conversation with Thomas A. Clark in which he suggests that poets should perform a simple, repetitive task, like carrying a stone up and down a hill every day, to hone the creative senses to fully perceive small moments and events. Do you follow his advice? If so, what is your simple, repetitive task?

Christian: Yes, I do follow Thomas A. Clark’s advice, in the sense that I make time to pray and meditate each morning, and often (not always) go for a daily walk. I am always astonished by the power of the small pause, and how much it can contain. “A little can be a lot, if it’s enough!” as my good friend Mariel likes to say.

ArtSake: You won a Mass Cultural Council Fellowship in 2011 by submitting an excerpt of Legal Tender, which has since had a series of performances and workshops. What compelled you to begin creating Legal Tender? And how did the project change (or not) as other collaborators became involved?

Christian: I began work on Legal Tender in the spring of 2009, about 6 months into the Recession. I had been listening twice a day to NPR, and heard almost no financial stories having to do with women, so I decided to start gathering them myself. Over the course of the next five years, I spoke to more than 50 women about their relationship to money, and then transcribed the interviews. It was a mammoth task. I always knew I wanted it to be a play, but had tremendous difficulty figuring out how best to structure it. Friends and allies helped me to focus in on particular stories, characters and themes, and then to create a show, adding music and movement. For the performance at the Quaker Meeting House in Northampton, there was a floating curtain make of dollar bills by way of backdrop ($300 total!), and we were given front page-coverage in the local paper. Most recently a friend and I have been presenting “Money Stories” workshops at a local Credit Union, using excerpts from the play by way of catalyst.

ArtSake: You’re a playwright, filmmaker (with Julie Akeret on the documentary Tomboys), prose writer, and poet. What does working in multiple disciplines bring to your work as an artist?

Christian: I think of myself as practicing what one might call “lyrical non-fiction” (a term invented by my good friend Ruth Gendler). If sensibility/aesthetics/core values are the palm of the hand, then the disciplines are the different fingers, allowing me to grasp whatever has become the current focus of engagement. I guess I think in terms of themes or areas of interest more than I do in terms of genre. This keeps the work open and risky in a way that sometimes causes panic, but also gives great joy.

ArtSake: Do you remember where you were and what you were doing when you got the news about your MCC award?

Christian: I was able to go back to my journal, to discover what I was up to when I heard the news about the MCC award in 2011. It was February 1st, a snowy day, flakes falling fast from the sky, and I had been busy darning a big cardigan, and crocheting a yellow woolen “money disc” for a presentation of Legal Tender. When the phone rang at 9:30am, I was at my desk, and got up grumpily to answer it.

And it was Dan at the MA Cultural Council, and he wanted me to know they were giving me one of the literary grants this year – $7,500! – There were only 4 awards in the playwriting group – 4! – out of 150 people – and I was one. I was astonished – delighted. “The Bible says something about how beautiful upon the mountains are the feet of him who bringeth good tidings,” I said. “I feel I should kneel down and kiss your snow-boots!”

And told him how tough this year had seemed, and how now I’d have 6 months rent, and what a relief that was.

ArtSake: So you used the money for rent?

Christian: I did indeed. By that point I had put in almost 700 hours of unpaid work – 43 interviews, with each transcription taking 8-10 hours, plus the interview itself – plus of course, the editing and shaping. By the time the check came, I figured I had made about $10.00 an hour. Ah well… I was entirely grateful.

Christian: A good friend of mine, Arthur Strimling, wants to direct a full length performance of Legal Tender next year, and we have just started work on that. Meanwhile, I am continuing with my “Money Stories” project – using excerpts to jump-start community conversations – both at City Lore in New York City, this November, and in Point Reyes, CA next spring. I would like very much to bring both performance and discussion to Boston if there is interest, and am certainly open to inquiries.

I have also begun doing publicity for Sparks from the Anvil. There will be an interview with New Hampshire Public Radio in September, and a number of readings, including one at the NH Poetry Festival on September 19th.

Christian McEwen is the author of Sparks from the Anvil: The Smith College Poetry Interviews, as well as a number of other books, including The Tortoise Diaries: Daily Meditations on Creativity and Slowing Down, and World Enough & Time: On Creativity and Slowing Down (Bauhan Publishing, 2014 and 2011). She won a 2011 Massachusetts Cultural Council Artist Fellowship in Dramatic Writing for a portion of her play Legal Tender. She is also an editor, freelance writer, and workshop leader – learn more.