You are here: Home / environmental art / Catch a Wave and You’re Sitting on Top of the World 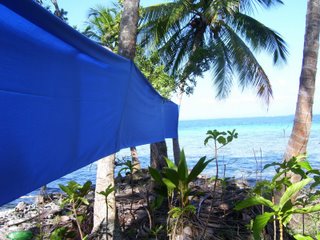 How high could the Atlantic Ocean rise due to climate change 100 years from now? Salem artist Terry Bastian attempts to answer that question with his Blue Wave Project. By using yards and yards of blue cloth, Terry marks out the projected levels for all to see where the sea will be. He recently marked the sea levels at Owen’s Park on Martha’s Vineyard, and he is coming to Salem this Saturday. The public is invited to meet at noon in front of the Peabody Essex Museum, Essex Street pedestrian mall, and walk to Derby Wharf. If you miss the installation on Saturday, he’s also giving a talk called Between the Melting Poles: How do we Adapt? on Thursday, July 17, at 7 p.m. at PEM.

…all over Manhattan, and down Doheny Way, everybody’s gone surfin’, surfin’ U.S.A.

Image from the Blue Wave Project in Belize

The Blue Wave Project is funded in part by the Salem Cultural Council.