You are here: Home / artist to artist / Bonus Tracks 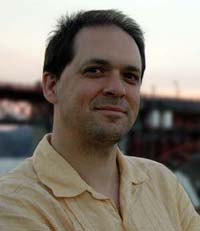 In an interview to gather material for the piece, Brian spoke on a number of topics we didn’t have room to include in the Artist to Artist dialogue. Below are some “outtakes,” where his imaginative mind ranges from cell suicide to arts funding to an installation artist’s version of lab research. Intriguing stuff!

On working with scientific concepts in his art
Brian: The way I find deeper meaning is to somehow make associations between the science and questions we all have. So you can look at… theres this process which I find really fascinating, called apoptosis. It’s basically the process of programmed cell death. Say a cell is damaged, its DNA is damaged, maybe from radiation. So the cell has a process where it’s checking its DNA all the time, and it finds it’s damaged. And so it can decide well, let me try to fix it, or it can decide I can’t fix it and I’m going to kill myself. And that process, of making that decision to commit suicide or not, they’ve found out recently is extra-cellular, meaning it doesn’t do it in isolation. It actually sends signals out to its neighbors, and they signal back to it. And somehow, some consensus is made, and the cell decides whether to kill itself or not. 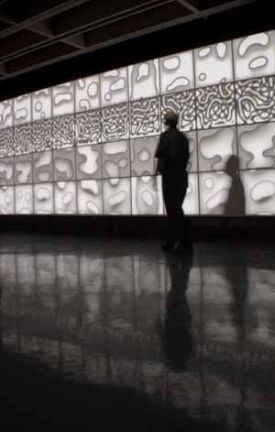 There are all these metaphors–consensus of a suicide, the decisions we make in our lives, how we might think we’re in isolation, but actually, we’re constantly extending, having interactions with people around us. But the other interesting thing is, the scientist who was explaining this to me said that cells have no state of partial death. In other words, if you look at the signaling mechanism, the actual chemistry, that figures out whether it’s going to kill itself or not, it’s a switch. It’s not a lever. It’s yes, I’m going to kill myself, or no, I’m not. So when I hear that, and I think about cell suicide, I start thinking about how we all live in a state of partial death. There’s a lot there to explore, about the ways we hold ourselves back, about anxiety, neurosis, all these ways that we are not very present in the moment. I’m not saying that there’s this exact connection–at all. It’s the metaphorical connection that fascinates me. So I can make a piece using the science, which hits people on two levels. One, it’s sort of cool science. And the other is that there’s a deeper meaning to it, which I think hopefully can speak on a more unconscious level, and a deeper level, and maybe create some sort of transformative experience. When I have both of those, that’s when I feel like I make some of my best work.

On what he’s working on now
Brian: The latest work is a bit of a comment on science. I should say that again. It’s a comment on our culture, through science. I’ve been doing a lot of work about aging. And I have been documenting some of the animals that they use in the science community for their research. I’ve been doing some work showing these animals change and go through some kind of developmental change, and creating pieces that are about time, aging, and change. I keep using the word change. I think what the work came out of is–most of my work is about change, but I think the direct connection to the medical school* has brought out this idea that our culture, our society, really values what they’re doing in research. And you see that by the money we give them. I’m not saying this to be bitter or anything, but I look at the money that goes into arts or performing arts or writing versus what goes into medical research, it’s just orders of magnitude difference. 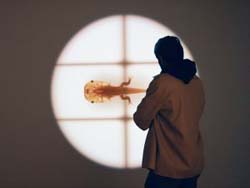 So why do we value medicine so much? I think it has to do with this thing that sociologists call scientific salvation. And that’s the idea that science will save us. Global warming–we’ll come up with some energy solution. Anxiety–we’ll come up with some medical solution. Death and disease, we’ll come up with some kind of medical solution. That’s all great, and I think medicine–if I can pop a pill to get rid of my anxiety, I’ll go for it. If we discover some energy source that cleans up the ozone, awesome. But I think that we focus too much on that, on the external causes for our fears and not enough on the internal process that goes on which is about acceptance, and this idea that, you know what, I’m going to get sick. I’m going to die. That’s inevitable. It doesn’t mean that we shouldn’t struggle, but it does mean that we focus too much on the struggle. And I think the real way to peace–to internal peace–is something smaller, is to work on yourself internally, and reach a place of acceptance. It’s really, really hard to do! But all of my works, I think, are about that. We’re all cycling, we’re all changing, and we’re all going to die. You can struggle, or you can accept it. So I’m taking these same animals (the scientists are) using but trying to give a different message, that if we’re going to use these animals to cure pain, as it is, I’m going to use these animals to try figure out a way to cure your internal struggles. (Laughs) Maybe it’s arrogant. But in a way, to be an artist, I think you have to be a little arrogant.

* Since 2005, Brian has been artist-in-residence at Harvard Medical School.

Brian Knep’s 2007 exhibition Aging at the Judi Rotenberg Gallery was recently honored by the International Association of Art Critics, New England chapter. His work will be featured on “Act/React: Interactive Installation Art” at the Milwaukee Art Museum, beginning in October 2008. See more of his work at http://www.blep.com.