Here, Sachiko Akiyama, one of the exhibiting artists, discusses the forces that shape her sculptural work. 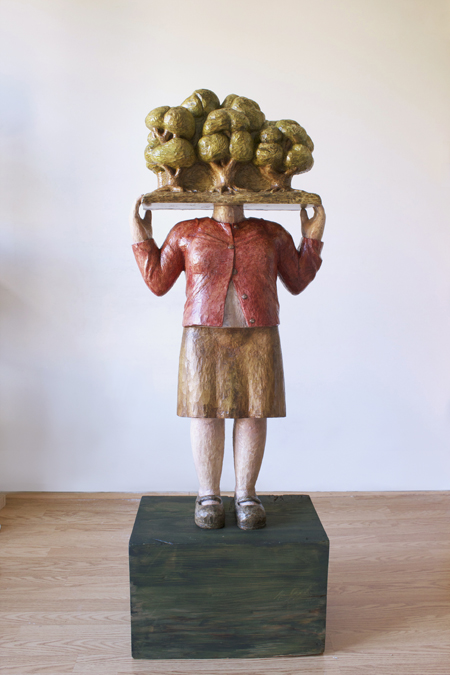 While my work references the historical use of wood carving in spiritual and religious art, such as medieval European wood carving and Egyptian funerary art, I am interested in exploring similar universal themes from a subjective, secular viewpoint shaped by my experience in the contemporary world. Starting from large laminated blocks of wood, I carve portraits of figures holding deliberate poses and often times interacting with wild animals or the landscape. I am interested in the multiple and oftentimes contradictory interpretations that can result from different combinations of these elements. 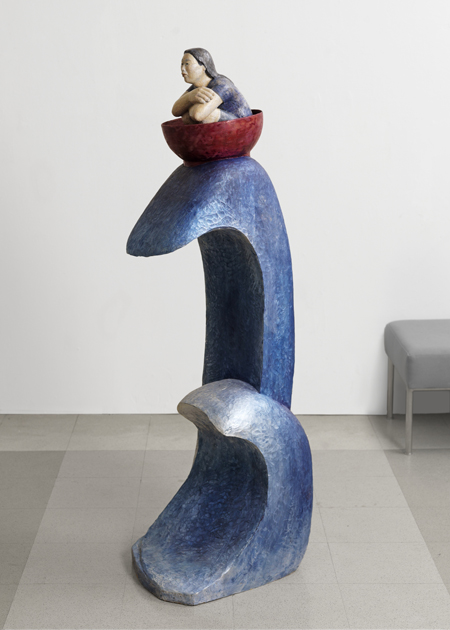 In my recent body of work, I am interested in natural forces such as ones that affect animal behavior that shape landscapes, especially mountains and forests. In Carried, Origins, and On Finding Home, I represent the figure situated in or combined with landscape forms. I have been studying geology and am interested in how mountains and waves are created by unseen forces below the surface and then further shaped by wind and rain. I continue to think of this as an apt metaphor for the forces that influence our lives, never fully explicable and often times unpredictable. It is my hope that this odd collision of figurative and landscape forms offer a wide range of interpretations for the viewer. The gradual introduction of materials such as resin and clay place more emphasis on the physicality of the sculptures, countering the “illusion of representation.” The resin mountaintops in Origins, for instance, make the image more dream-like while also drawing more attention to the materials that the sculpture is made of.

All images courtesy of Sachiko Akiyama.