You are here: Home / arts law / Artists as Independent Contractors in MA 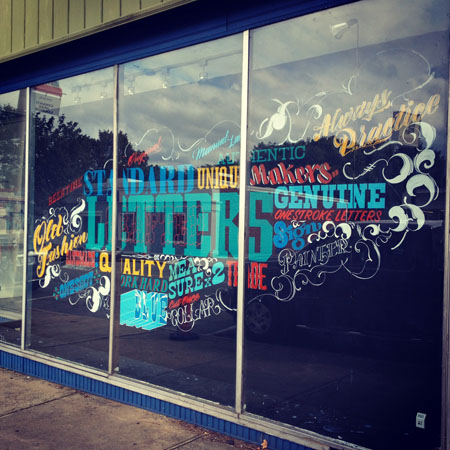 In Kenji Nakayama‘s terrific letter stream (above), art meets commerce quite literally – in a storefront window.

But art and commerce can, at times, be uneasy partners. There was an interesting post recently in the (always-interesting) Grub Street Daily by John Weeks, a democratic strategist, political consultant, and Grub Street writer. Like many writers, Weeks works on a freelance basis, but in the post, he talks about how Massachusetts law 148B, aka the Massachusetts Independent Contractor Law, prevents publishers from hiring Massachusetts-based freelance writers.

It’s a good law that exists to protect workers from the corporate ruse of “misclassification” and the attendant loss of important employee protections. In recent years, however, the law has come under fire from freelance writers because it’s costing us work.

In essence, the wording of the law makes companies wary of hiring Massachusetts creative freelancers – not only writers but illustrators, designers, and other creative disciplines – because the companies, naturally, don’t want to run afoul of the law. Even though the law’s intended purpose is to protect workers (Weeks cites delivery drivers, chauffeurs, and construction workers, for example) from unfair misclassification that deprives them of employee protections, it effectively blocks MA creative freelancers from getting independent contractor work they want.

Read the article by John Weeks, a member of the Independent Contractor Working Group to find a solution for the issue. And for further research, check out the Massachusetts Artists Leaders Coalition (MALC), an organization that has been actively advocating on behalf of artists on this issue, and a WBUR piece on the issue in 2010.