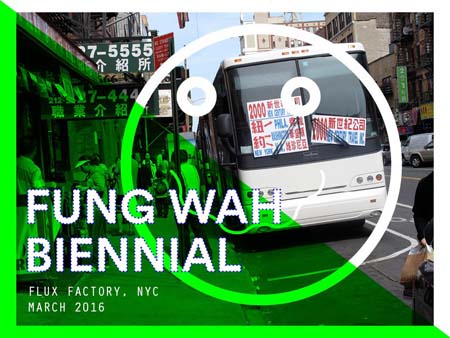 Tickets please. All aboard. Destination tbd.

Call for Work Entries are now being accepted for the Flux Factory’s Fung Wah Biennial. In March 2016, Flux Factory will serve as a work and rehearsal space to create, perform, and install works in 3 separate Chinatown bus trips to 3 cities in the North Eastern U.S. During each weekend in March 2016, a bus will leave NYC to venture to a new city and back. Artists are invited to create works to be presented specifically on the bus while en route traveling to their respective destinations. The audience will become a mixture of those who have knowingly signed up for the Fung Wah Biennial and those who are simply traveling by bus (i.e. innocent bystanders). Learn more.
Deadline: January 1, 2016

Public Art Proposals The Rose Kennedy Greenway Conservancy is seeking proposals from artists to create engaging public art around the 2016 Chinese Zodiac, Year of the Monkey, as part of an ongoing series in Chinatown Park in downtown Boston. Artists will be asked to submit proposals for site-specific work to be temporarily installed and displayed in Chinatown Park. Work in any medium will be considered and must be durable and suitable for outdoors with the ability to withstand the elements of a New England climate as well as interaction with the general public. Learn more.
Project Proposal Deadline: December 14, 2015

Call for Media Art The Massachusetts Convention Center Authority (MCCA) and Boston Cyberarts are issuing the seventeenth call for media art to display on the Marquee at the Boston Convention & Exhibition Center. They are looking for 30-second videos, animations, or computer-generated motion works by Massachusetts artists that push the creative limits of this 80-foot, seven-screen, three-sided LED sculpture. Learn more.
Deadline: January 3, 2016 (midnight)

Process-Based Residency The Bemis Center for Contemporary Arts in Omaha, NE, is now accepting applications for their Sci-Fi and the Human Condition Thematic Residency; there is no obligation or expectation to complete and/or exhibit a body of work. This residency aims to put into conversation artists who work in like-minded subject matter and interests. Through this call, the Bemis Center will construct a cohort of artists interested in the human condition when exploring issues of race, class, and gender through futuristic lenses. Learn more.
Deadline: January 8, 2016

Monologues Forward Theater Company, an Equity theater in Madison, Wisconsin, is currently accepting entries for their fourth monologue festival, Someone’s Gotta Do It, to be held in September 2016 at Overture Center for the Arts. Learn more.
Deadline: January 15, 2016