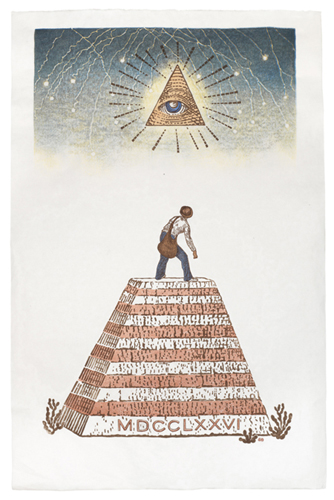 At Available Potential Enterprizes, Ltd. in Northampton, 20 artists from Zea Mays Printmaking studio will exhibit in Scale in Contemporary Printmaking, which has its opening reception this Friday, May 11, 2012.

One of those artists, Annie Bissett, will be on-hand at the opening. And she’ll be making money.

Her contribution to the show will include selections from Loaded, a series exploring currency and economics, and she’ll be printing a currency of her own creation at the opening reception.

Here, Annie puts in her two cents on art, money, and more. 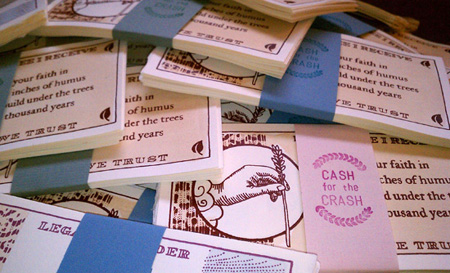 So… how do you make money as an artist?
That’s the $64,000 question. Until about 6 years ago I was a commercial artist/illustrator and I made good money, but earning a living as a fine artist isn’t so easy. In the 1990s I could sell a fancy pie chart that took me an hour to make for $400, so I’ve been shocked to discover that it’s hard to find a buyer who will pay $400 for a woodblock print that takes me 6 weeks to complete. As part of my recent series of prints about money, called Loaded, I decided to design a currency to celebrate the parts of our economy that are undervalued or ignored in our calculations about value and worth – things that we rely on for life itself that are free and priceless and belong to everyone. There are no numbers on my currency because things like air or water or community can’t be counted.

Why Loaded (the project)? Why Loaded (the title)?
I tend to make work about things that bother or puzzle me, so between the economics of my own shift from commercial to fine art and the so-called global economic crisis, the topic of money was looming. I struggled with how to tackle it until I got the idea to isolate small sections from a $1 bill, blow them up very large, and use them as jumping off points for composing some large format prints. Once I got started there was plenty of material to keep me going. As for the title, I was an English major in college, so I often start with a word or phrase in my art making process. I liked the word loaded for its multiple meanings: wealthy, charged with meaning, bearing a heavy burden, armed and ready to fire.

What’s the most surprising response to your art you’ve ever received?
Before Loaded I did a series about the early settlers of Massachusetts which includes a lot of references to the Mayflower. Every time I show those prints at least one person will approach me and discreetly reveal to me that they’re a Mayflower descendant. It has a very confessional quality, sort of like a gay person coming out of the closet. It surprised me initially, but I’ve come to feel that receiving those confessions is part of the work.

What’s next?
I have more to do in the Loaded series, including a group of works that examine cliches which use the same metaphor for both ends of the economic spectrum, like “filthy rich” and “dirt poor.” Then I hope to move on to something new. I’d like to make a block-printed book. 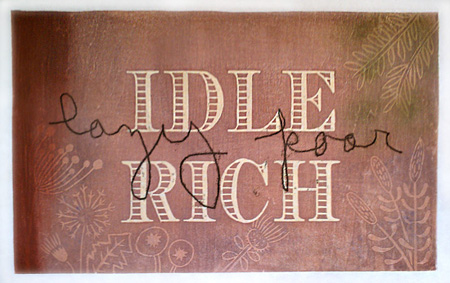 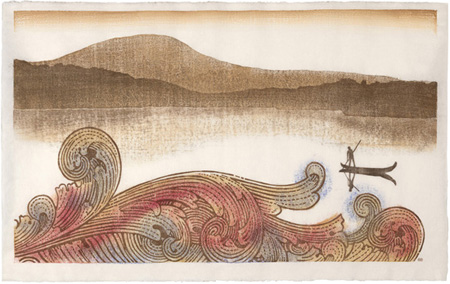 Scale in Contemporary Printmaking runs at APE in Northampton May 8-31.

Images: recent work by Annie Bissett. All images courtesy of the artist.